Pixar and the Street

My son Christian interviewed Incredibles 2 editor Stephen Schaeffer. It gives a detailed look at the nitty details of making an animated feature. For me, the most interesting parts were about the design of the Pixar studio building:

“The Pixar building was designed by Steve Jobs, who wanted to build a workspace that would promote ‘accidental’ encounters between coworkers (according to Walter Isaacson’s biography of Jobs). The hope was that these unplanned meetings would result in an explosion of creativity. Turns out, Jobs was onto something. . . .One design feature at the studio is the enormous atrium where artists, animators, editors, and computer programmers mingle and swap ideas. ‘Having that kind of exchange every day is invaluable,’ Stephen [Schaffer] says. ‘I can’t tell you how many times I’ve just been having coffee with one of my fellow editors and at the end of our conversation, I run back to my room to try out this thing that he told me to try, a shortcut on my keyboard or whatever.’”

Call it corporate New Urbanism, with Jobs standing in for Jane Jacobs, the wisdom of the street. 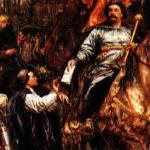 We Would Do Well to Dig Deep into...
Note from Randy: Here’s another precious insight from Nanci’s journal. One of the...
view all Evangelical blogs
Copyright 2008-2021, Patheos. All rights reserved.
Close Ad