But it’s not modern 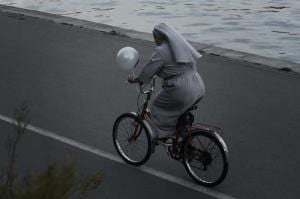 Nearly ten years ago, when I lived in Huntington Indiana, I volunteered to read to a 96-year-old religious sister (of Our Lady of Victory Missionary Sisters, headquartered in my town). In fact, I spent much of the time talking to her, and listening to her. Sister Roseanne was one of the most fascinating and remarkable people I’ve ever met. She had lived through the Great Depression, had traveled the world, and had joined the order in her 60s, serving in the Southwest as a teacher and social worker before retiring in her 80s when her eyesight failed. She was a wise and holy woman and I learned a lot from her. But we frequently clashed over her deep commitment to being “modern.” I wasn’t always clear what she meant by this, but she thought it was very important.

She was baffled by the young women in the other convent over the hill. (It had once been a Capuchin friary, then was sold to a Protestant denomination, and had recently been recovered for Catholicism and was now a novice house for a very conservative order of Dominican sisters.) They all seemed to be about eighteen and they wore massive, smothering habits. Sister Roseanne’s order had originally seen themselves as catechists rather than nuns, but had been forced to adopt habits in order to be accepted into certain dioceses. They had got rid of the requirement gratefully not long after Vatican II, though a few continued to wear them.

Sister Roseanne was not one of those. And the willingness of the young Dominicans to wear them baffled her. “It’s not modern,” she complained in bafflement. And yet, the average age of her order was something like 70 while the traditional convent over the hill swarmed with eager young women.

It’s easy to laugh–affectionately of course–at this lady of nearly 100 proclaiming her modernity and wringing her hands over the obstinate traditionalism of the young. But I think one of the curses of modern American Catholicism is the contempt that so many more traditional Catholics feel for people like Sister Roseanne. She was almost, in a way, the caricature of what conservatives think liberal nuns are like. She disliked traditional devotional practices such as the “May Crowning,” which she found “childish.” She believed (mistakenly, of course) that Vatican II had abolished the Sunday obligation (or at least allowed people to meet it through going to Mass during the week). She was of course very liberal in her political views, though as far as I recall strongly opposed to abortion as well as to the death penalty.

Her piety was deeply practical and centered on love of neighbor. But it was a rock-solid piety that informed every aspect of her life. I have met very few people who seemed so constantly, naturally, comfortably aware of the presence of God. She spoke to me a great deal about the difficult path of discernment that had led her to join the Victory Noll Sisters at the age of 67.

She had always wanted to join the Ursulines, who had educated her. But her mother, who had raised Sister Roseanne and her sisters after her husband’s tragic death, was in poor health, and Sister Roseanne postponed her own ambitions to take care of her. After her mother’s death she went to the Ursuline convent and declared her willingness to become a novice. But as she was talking to the nun who had been her teacher and mentor, the nun looked at her suddenly and said, “It’s not right, is it?” “No,” said Sister Roseanne. “Well,” said the nun, “you had better find your vocation soon, because I’m not letting Him take me till I’ve got a replacement.”

She would eventually find that vocation with a less conventional religious order, the Victory Noll Sisters. But not for many more years. And even then her path was not easy. Becoming a novice after years of independence was extremely difficult for her. She nearly left the order several times and was dissuaded, at one point, by a vision of her mother who told her to remain.

Visions popped up in her conversation a lot. Another vision convinced her of the salvation of her dead brother, about whose soul she was worried. She might, rhetorically, be convinced of the importance of being modern, and she might wince at some traditional devotions. But the basic structure of her faith was one that her medieval counterparts would have recognized easily.

I wish now, as one does so often when it is too late, that I’d tried harder to keep in touch with her after I moved. I began writing about her in my post The Lure of the New, the Tug of the Old. But she threatened to take over the post, so I decided she needed a post of her own.

While working on this post, I discovered that she had died in February of 2018, at the age of 102. Where she is now, nothing is modern, but everything is eternally new.

Pray for me, sister.

July 8, 2020
God and the gods: will the real monotheism stand up?
Next Post

July 17, 2020 Jumping out of the Flying Ship: Resisting False Traditionalism
Recent Comments
0 | Leave a Comment
Browse Our Archives
Related posts from Light in the West