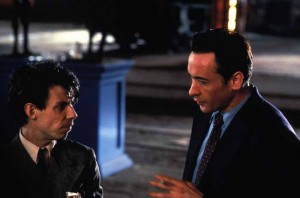 [This review was first published on the original Looking Closer website on May 12, 2003.]
–

Noah Taylor is best known for his charming lead role in the romantic comedy Flirting, and more recently made memorable marks on Almost Famous and Vanilla Sky. Now he’s starring as the most notorious monster of the 20th century.

Max dares to delve into the life of Hitler in the days before the Holocaust, and Taylor is scarier than any orc in his intense performance as Adolf. His performance reveals a bitter, wrathful, prejudiced, and explosive young man torn between his desire for an audience and his mediocre talents as an artist.

The most interesting thing about this film is the way Taylor forces us to face the reality that Hitler was a human being, who was sometimes invited out for lemonade, whose friends tried to match him up with girls, etc. It can cause you to think again about the troubled young men in your own community, how preaching at them instead of listening to them only throws fuel on their anger and drives them to seek ways of striking back. As portrayed here, Hitler had no friends, and only a few took enough pity on him to try and encourage him.

In this chapter of Hitler’s life (as it is portrayed), his closest acquaintance is German artist Max Rothman, played by John Cusack in his finest dramatic work. I wouldn’t call Rothman a “friend” so much as a businessman with a soft spot for struggling artists. Hitler is like Gollum, wretched and repulsive in his self-loathing and rage, but Rothman is no Frodo. He pities Hitler enough to give him a few pointers, but he is not bold enough to make any kind of commitment to helping the boy. As Hitler tries to win an exhibit in Rothman’s art gallery, Rothman tries to steer him away from the ugly and divisive politics of German anti-Semites. But when he refuses to give Hitler the exposure he wants, Hitler loses his patience. Their friendship heads for disaster, and the world plunges toward a nightmare.

Menno Meyjes’s film is an ambitious idea, and it gives Taylor and Cusack plenty of opportunities for passionate speeches and energetic debates. But that is about all that the film has to offer. The speeches and arguments themselves are simplistic and unsurprising. Hitler hates Jews, yeah. His art is mediocre, okay. Rothman says “Go deeper!” Uh-huh. They sound like what non-artists might imagine artists talk about, but to artists they will probably sound shallow and obvious.

There is potential here for an interesting comparison. Rothman has anger in him too, stemming from his wartime experience. He channels that disillusionment and pain into art, a path that might have helped Hitler purge himself of his demons. The film could have gone deeper into questions of how political agendas and artistic vision conflict. Or we might have had a larger biopic. But Meyjes’ film is too short, taking on too many issues, and thus only scratches the surface of each of them.

I kept wondering what director Milos Forman would have done with the material; his interest in how the angst of troubled men was transformed into art and comedy made both Amadeus and Man on the Moon compelling explorations. As it is, Meyjes divides our attentions between the two major players, failing to take us far enough into either characters’ heart.

But the title of the film is Max, and thus it seems that the focus should be Rothman. Rothman’s life clearly offers enough material for a whole film in itself; his acquaintance with Hitler could have been included as just another fascinating episode along the way. We get glimpses of Rothman’s troubled marriage; Molly Parker’s brief but intriguing performance as his neglected wife hints at what might have been a more interesting story.As it is, Max ends up feeling like excerpts from a larger, better film; we get two sketchy portraits of passionate and compromising men. 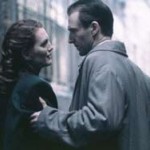