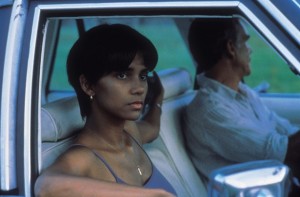 [This review was first published on the original Looking Closer website on May 12, 2002.]

Halle Berry plays Leticia, the wife of a convicted killer, a mother trying to raise her son right and survive as a black single mother in the middle of the South’s racial tensions. After the criminal is executed, Hank’s dispute with his son (Heath Ledger) intensifies. But as he watches Leticia grieve while she works at his favorite late-night diner, he comes to care for her, and love begins breaking apart his prejudice.

Make no mistake: This is a story about people who are severely damaged and lost, behaving in reckless, dangerous ways as they nurse their particular needs for love, understanding, and intimacy. People are killed. Men lash out in racist hate. Father and sons call on and use prostitutes to find fleeting satisfaction. A mother beats her son. Lovers fall into hasty sex while under the influence of alcohol. It is not a pretty picture, and definitely not a film for younger viewers, or for the squeamish.

But the central theme of the story is this — hate, even hardened racism, can be overcome by love and compassion. Hank and Leticia are moving towards a mature relationship the way toddlers learn to walk — they’re making every variety of mistake, fumbling their way towards the basic lessons of love, gaining wisdom inch by inch. Their missteps are clearly portrayed as missteps. (Hank’s interaction with a prostitute is not glamorized, but shown as the joyless, empty, and contemptible exchange that it is. Thus, when he finds true love, the revelation is all the more meaningful.) Each mistake Hank makes teaches him something.

But director Marc Forster makes us too intimate with these characters. When two of them get drunk after a devastating day, they tumble into sad and desperate sex that is so explicit it will destroy viewers’ suspension of disbelief and set them to thinking about the actors themselves. Sex scenes may have been necessary to illustrate the incremental, intimate relationship that develops, but the way Forster has filmed them makes them disruptive. It’s a primary rule of art, Mr. Director — less is more.

I also think Forster portrays Southern prejudice a bit too intensely. Sure, prejudice is still easy to find in certain areas of the U.S., but the movie doesn’t explore the issue very thoughtfully. It’s just loud, offensive, and in-your-face — a bunch of brutal clichés played for shock value, to make contemporary audiences gasp and end up hating the bad guys. If I lived in the South, I’d find the relentlessness of these portrayals to exhibit a prejudice of their own.

The films seem more evident upon reflection, after its powerfully meditative mood music and leisurely camerawork are finished. Forster is a little to excited about his film’s symbolism, and he uses it heavy-handedly. During one scene we see jarringly incongruous pictures of someone trying to free a bird from a cage. Yeah yeah, we get the point: Leticia’s caged heart is being set free. Not only is that a cliché, but there is no bird or birdcage in the story, unless I missed something;  thus the audience is left trying to figure out “Whose bird is that?” If Leticia had kept a bird, that would have been just enough of suggested metaphor. As it is, it is nothing but a metaphor… clumsily cut and pasted into the film.

The movie’s leisurely pace gave me room to remember where I’d seen this story before. Monster’s Ball is The Crying Game, re-set in the American South, where bad men are prejudiced against blacks instead of homosexuals. The hero begins the movie participating in the execution of a man whose wife he will, racked with guilt, decide to befriend and support. As in The Crying Game, these two very different people will fall in love, and of course, the hero’s connection to the execution will remain secret until the end.

But we also have As Good as it Gets here, as Hank and Leticia get to know each other through quick, tense, prejudice-laced exchanges in a diner, while she pours his “black” coffee and serves his “chocolate” ice cream. Perhaps the unflatteringly graphic electric-chair scenes will give the film the added importance that worked for Dead Man Walking.

This is a movie hard-wired for critical acclaim, so loaded with issues that it may have backfired among Oscar voters. While it won Roger Ebert’s “movie of the year” mention, it hasn’t become an “event” film for any reason other than Berry’s occasional state of undress.

But far be it from me to say the film is empty. Heavy-handed and derivative as it is, thanks to its two central performers, it strikes some resonant chords about forgiveness, compassion, and doing the right thing.

May 11, 2004 Making Songs Out of Stories: Over the Rhine's Linford Detweiler on 10 Years of Songwriting
Browse Our Archives
Related posts from Looking Closer