Christopher Guest’s commitment to “mockumentaries” about community events is a curious thing.

All three of his semi-improvisational films — Waiting for Guffman, Best in Show, and now A Mighty Wind — have explored and celebrated the strange behaviors of human beings as they prepare for a public spectacle. He choreographs comical collisions of ego and inanity, and the results usually cause us to wince, laugh, and groan. And somehow, in the midst of inspired improvisation, he strikes resonant notes of insight regarding ambition, dreams, and the ugliness behind the deceiving facade of show business.

In Guffman, it was a small community theatre fumbling their way through a mediocre pageant, convinced of their excellence and admirable in their dedication.

Best in Show drew dog enthusiasts to display their pride and joy on the runway of a dog show, only to reveal that the owners were stranger by far than their dogs, rather blind to their own ugly egos and curious affectations.

Both of these revealed a glow of heroism in the most humble of characters, a stench of wickedness in the most narrow-mindedly driven. Show business is on everybody’s mind, but what about their hearts? Their hearts can be found where their treasure is.

A Mighty Wind “documents” the revivals of a few folk music acts from the late ’60s for a nostalgia-fest prepared for public television. They gather to honor the memory of a pioneering folk musician, Irving Steinbloom, who has recently passed away. His children, three contentious adults with a feeble appreciation for their father’s work, see an opportunity to honor him, and so they strike up a deal with public television and New York’s Town Hall to put on a “Down from the Mountain”-like program.

Of course, this is Christopher Guest-land, a world as quirky as the Coen Brothers’, where blind spots, handicaps, and weaknesses are exaggerated to make us see ourselves in them, so we can laugh… not in a mean-spirited, superior way but in a way that highlights our common flaws.

Unfortunately, Guest’s impressive improvisational cast go for the easy punchline too often this time. There’s nothing wrong with a good bawdy joke… but that’s just the problem. Much of Mighty Wind‘s humor is not particularly clever; it descends too quickly and too frequently into revelations of promiscuity, pornographic dalliances, and other crass misbehavior. Where Guffman and Best found hilarious comedy in chaotic collisions of fractured personalities, in accidents, capers, and outrageous stories, Mighty Wind boasts only a few moments of inspired chaos.

Nevertheless, when Mighty Wind gusts, it leaves the viewer unexpectedly shaken. The songs are all wonderful, tongue-in-cheek and yet performed with passion and skill. (Look for the soundtrack, produced by the great T-Bone Burnett, on DMZ records.)

Eugene Levy and Catherine O’Hara stand apart from a cast of goofy personalities, creating a folk music duo who actually win our hearts. We care about them and want them to succeed and rediscover some of the “magic” they reminisce about. Levy has never been so wacky and O’Hara turns in what may be the best performance of her career, showing off far more range and depth than the rest of the cast have opportunity to demonstrate.

Levy and O’Hara play Mitch and Mickey, a pair who supposedly struck a chord with audiences in the late 60s by personifying romance in their lovey-dovey harmonized duets. After their breakup, Mitch spiraled downward into a mental catastrophe. He now stares out blankly from his mop of tousled hair, looking as if he is  subjected to hourly  blows to the head. He stammers as if it requires severe effort to complete a coherent thought, as if speaking gives him abdominal cramps. Likewise, Mickey is a shadow of her former self, prone to waxing nostalgic as she stares into the past and that long-lost, brief-but-passionate relationship she and Mitch once shared. She has deteriorated into the bored, sad, fidgety wife of a man who sells bladder-control equipment to elderly people by day and fiddles with his model trains by night. Their marriage is the antithesis of the romantic ideal manifested in the Mitch and Mickey tunes now available only on dusty old vinyl.

Levy and O’Hara steal the show as suspense builds for their onstage reunion, and the question rises of whether their moments in the spotlight will spark any of their old fire. What I anticipated would become some sort of culminating catastrophe becomes instead a moment of surprising grace and sadness.

The rest of the cast is fun but frivolous. Ed Begley, Jr. earns some laughs as Lars Olfen, a folk-music-loving Norwegian with a fondness for Yiddish who uses his clout as a public televison executive to get the festival on the air. Bob Balaban is hilariously annoying as Steinbloom’s anal-retentive son, the “idea man” behind the event. Jennifer Coolidge and Fred Willard deliver the movie’s sharpest zingers during brief but inspired performances. Michael McKean, Harry Shearer, and Christopher Guest who made such a memorable noise in This is Spinal Tap! earn some grins as “The Folksmen.” Parker Posey positively glows as the overly enthusiastic new life in an anachronistic supergroup. And in what amounts to a cameo, Michael Hitchcock makes the Town Hall manager a memorable loony.

Unfortunately, several characters that show great promise remain undeveloped. Guest, who is usually the highlight of his own films, holds himself back. Other familiar faces like Larry Miller (Best in Show) and Bill Cobbs (Sunshine State, The Hudsucker Proxy) are introduced and then promptly disappear for the remainder of the film. Were their scenes just so flat that they ended up cut from the final film?

I have great admiration for Guest’s insistence on improvisation. He works with such inspired comics that their on-the-spot interactions are often funnier and more convincing than the best scripted comedy. But even the most talented artists have an off day, and you can feel that for all of the effort put forth in A Mighty Wind, they just never struck the comic gold that dominated the earlier films. The comedy engine is humming, but it stays at a low idle and never fully kicks into gear.

I come away wondering what it is that draws Guest to this theme again and again, from This is Spinal Tap to this, its folky cousin. They explore such a familiar theme — the glory of youthful days, when talent flourished, dreams were big, when hard work led to something memorable, when romance and passion ran hot.

But he is also preoccupied with characters past their prime, doomed to dream of days gone by. I do not sense the films leading us to any insights about how such a sorry fate can be avoided. But I think we can discern hints of wisdom about how we can avoid trudging into regrets and empty nostalgia.

Sure, we all experience memorable and wonderful things in our youth that fade with time and experience. But to spend one’s latter days looking backward is to admit that one’s passions were misplaced. These characters seem lost in nostalgia, unable to cope with aging, with the demands of committed marriages and relationships. They seem to have lost their devotion to singing a new song and now dwell on what has become stale. One character boasts about her superficial singing group, and you can see why she found it so fulfilling when you learn her previous experience was in the making of pornographic films. That is bitterly amusing, but it is rather frustrating to see that Guest includes no characters who have found anything truly fulfilling.

Perhaps the angst and sadness at the heart of these characters lies in the folly of their self-centeredness. They celebrate only the outer fringes of beauty and meaning. They like the spotlight. They like the attention. They like the rush of amorous love. But none of them are drawn to a compelling vision that draws them into selflessness, into sacrifice or service. The loves remain focused on rushes of hormones and emotions, not dedication and devotion. Marriages are dead, both spouses looking elsewhere with longing. The musicians hit bottom, focusing on crowdpleasing instead of art. Only “The Folksmen” seem somewhat balanced and focused in their work, spending some energy on craftsmanship and integrity and the joy of performance. Guest’s film, for all of its frenzy and frivolity, can serve as an inadvertent caution against ego, mediocrity, and redundancy.

“Nostalgia,” says Bob Dylan, “is death.” And he should know — he’s the most admirable champion of the folk music scene, and he remains a relevant artist by always breaking new ground, intent upon vision, beauty, truth, poetry, excellence, and authenticity. I think he’s probably laughed his way through this movie several times. 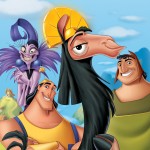