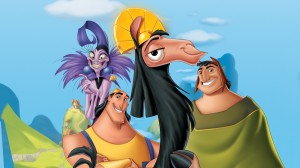 I walked into The Emperor’s New Groove expecting another formulaic Disney movie. I came out giddy with joy.

For all of the craftsmanship of this year’s smash family movie Chicken Run, The Emperor’s New Groove is ten times funnier and more creative. It’s one of the year’s… uh… the year’s best… NO! I can’t make myself say it! It’s a Disney movie! Aren’t Disney movies just predictable, made-for-marketing, and drenched in sentiment?

Sentimentality has slowly swallowed storytelling in Disney animated features since The Little Mermaid. It hasn’t been all bad. Aladdin had some inspired sequences. Tarzan had some dizzying animation. The Lion King had strong mythic backbone, but stumbled into touchy-feely sermons on “the circle of life”. And Pocahontas had… uh… nothing at all.

Disney’s remarkable tradition has been dying a slow death. Think back to the glory days. 101 Dalmatians. Pinocchio. Snow White and the Seven Dwarves. The focus there was on classic storytelling told with imagination and skill. But in the 90s, Disney movies were more about an Elton John theme song or a Robin Williams vocal performance than about a good story.

Disney’s least-promoted, least-marketable movie in years has arrived… The Emperor’s New Groove. Early buzz was bad, as word got out that it was a barely-salvaged movie that had originally been intended as a major epic along the lines of The Lion King. Lo and behold, it’s the most entertaining, perhaps the best, Disney movie in more than a decade. And there’s barely a shred of sentimentality in the whole thing.

Director Mark Dindal keeps this movie moving at an exhilarating pace. Groove introduces us to Emperor Kuzco (David Spade), a sarcastic, prideful emperor who likes to flaunt his power and outrage his peasant workers. Soon after he decides to build a swimming pool on the site of a loyal peasant family’s home, he finds himself the victim of a revenge plot enacted by a former employee, the nasty villain Yzma (Eartha Kitt). Yzma, with the help of her boneheaded bodyguard Kronk (the booming voice of Patrick Warburton), plants a potion in the king’s drink in hopes of killing him. The potion goes wrong, and the Emperor is now a llama.

Kronk tries to dispose of the Emperor Llama, but loses track of him, and soon the llama’s life is in the hands of the peasant family that he was about to displace. Pacha (John Goodman) is a lumbering good-hearted shepherd who wants to teach the Emperor some humbling lessons before helping him find the cure to his curse. When evil Yzma finds out the Emperor is still alive, the chase is on.

Plot is almost secondary in this movie. Comic timing is its masterstroke. Lickety-split banter between brilliantly conceived characters, chase scenes that leave you breathless with laughter and surprise, and how-will-they-get-out-of-this-one predicaments that pay off in the end… this is a whole new ballgame for Disney.

The characters are all unforgettable, thanks to their designers and voice talents. Kuzco is the most worthwhile thing David Spade’s ever done. He’s mean-spirited and cynical, but you can sense a likable guy under all that guff (and all that hair.) Eartha Kitt’s superhuman vocal performance as the villain is a hoot. Yzma may resemble Cruella DeVille and Madame Medusa, but she’s more fun to watch than either of them, and where she ends up in the end…well I won’t tell, but it’s NOT where the villain usually goes in a Disney movie. Kronk is the movie’s unintentional center, a man of baffling moral dilemmas that are fought by his “shoulder angel” and “shoulder devil”. His astounding stupidity is equaled only by his self-confidence and charm. Kronk is my favorite Disney character since…uh…Evinrude of The Rescuers.

The animators seem determined to keep the audience guessing. You never know what you’ll find around any particular corner. Lost in the jungle, the llama-king must obviously avoid jaguars and quicksand, but who knew that the greatest threat of all is a temperamental squirrel? Occasionally the movie freeze-frames so the llama can make some remarks about the progress of the story. And conventions, like tracking the progress of characters’ travel across a map, are cleverly altered for good laughs.

Best of all, there is not a single sappy Oscar-begging pop song. There’s only a Tom Jones show tune that firmly establishes Kuzco’s character. Disney studios finally had mercy on us. Apparently this was a last-minute decision. Poor poor Sting, who wrote five or six songs for the film, saw them cut from the final product. That was unfortunate for him, and he has every right to go after Disney for unfair play, but it’s good news for us that the movie is so mercifully uninterrupted. I like Sting’s music, but I’m glad it didn’t trip up the pace of this film. Besides, he does get to sing the end-credits anthem, and it’s a pleasant soundtrack for those who stay to read the names of the people who made this film such a shockingly fun time at the movies.

Some may find that Groove is so in-your-face outrageous, so over-the-top, that it falls short of oldies like Lady and the Tramp. They’re right. The Emperor’s New Groove feels more like a movie-length Ren and Stimpy episode than it does Lady and the Tramp. But I’d rather see Kuzco the half-crazed llama than another uninteresting lovesick hero whose parents have died and who must find his place in the circle of life and then throw the villain from a high place to his death. We’ve suffered that tired old story enough. No more independent young heroines yearning for love, no more baby animals lost in the woods. This time, for the first time in ages, Disney has sung a new song. Rejoice.

I am astonished to find myself calling this… okay, I’m going to say it… one of my favorite films of the year. 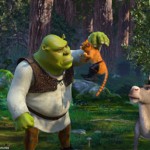