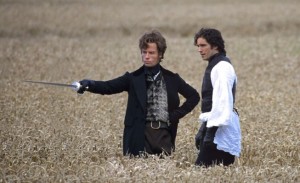 [This review was first published at the original Looking Closer website in 2002.]
–

Director Kevin Reynolds, responsible for the bloated Waterworld and the misguided Robin Hood: Prince of Thieves, has chosen a strong cast and a solid script for his adaptation of Alexander Dumas’ The Count of Monte Cristo. The result is not a great film, by any means, but it reveals that Jim Caviezel (The Thin Red Line, Frequency) can be a compelling big screen hero and Guy Pearce (Memento, L.A. Confidential) can be an effective villain.

You probably know the story. The arrogant, self-centered Fernand, who will inherit the title of Count, and his boyhood friend Edmond Dantes, find themselves increasingly at odds. As Fernand draws closer to inheriting his noble title, his prejudice against those without “noble blood” increases. When Edmond becomes engaged to a beautiful woman named Mercedes, Fernand gets jealous. After all, why is Edmond so happy when he’s not a noble? Doesn’t the nobleman deserve to be happier?

Things turn bad for Edmond when, acting out of kindness and honor, he naively betrays his country, unwittingly giving Napoleon an advantage in the war. When this unintentional treachery is discovered, Edmond is unfairly imprisoned in an island dungeon. There, he meets a fellow prisoner, a priest (Richard Harris), who challenges him not to give up on God. The priest educates Edmond in reading, writing, and swordsmanship, preparing him for the slim chance of escape.

But when Edmund seizes the chance, will his desire for revenge ruin all his hopes for happiness?

The Count of Monte Cristo succeeds where Gladiator, in my opinion, failed. Gladiator looked better, and it was far more intense. But the movie focused on the bloody battles in which Maximus works his way toward revenge. It failed to give an adequate sense of how its hero grew and what he learned during his trials and suffering. A lot of Maximus’s potentially enthralling story was overlooked in the movie’s mad rush towards the bloody last act. Once it got there, despite the lip-service paid to honor, vengeance was given big-screen glory.

Monte Cristo, on the other hand, takes its time, so we can suffer alongside the hero, and contemplate with him how he will rise above his trials and regain his freedom and his beloved. Thus, when Edmund finally gets his chance, we know the road he has walked. We also are well aware that if he does carry out his revenge as planned, he might do more damage than good, while Gladiator glorified vigilante vengeance as heroic.

The film’s script, written by Jay Wolpert, is also bold enough to raise questions about how God uses evil for good. Edmond is tempted to give up on God when he suffers for years in prison. But God brings him a counselor who comforts him and assures him that God will have His way in the end.

In spite of these good questions, Monte Cristo unfortunately loses its convictions. While it offers an insightful portrayal of the damaging effects of vengeance upon the man who wreaks it, there is a big cop-out in the conclusion, as our hero answers the call for vengeance anyway. “Not by might, and not by power, but by my Spirit,'” says the Lord, but really… who wants a story to end like that? Oh well, at least the movie acknowledged the issue.

Jim Caviezel’s performance is surprising. He convincingly portrays Edmond’s journey from idealistic youth to weathered experience, from awkward to an accomplished swordsman. The changes in his gaze and his physicality are subtle and convincing. He’s not a show-off, like so many leading men who want to wow us with their chameleon qualities. I found myself wondering if Caviezel could have been a more convincing, authoritative, weather-beaten Aragorn than Viggo Mortensen was in The Fellowship of the Ring. He has the piercing gaze of Daniel Day-Lewis, and commanding voice, and the ability to express gentleness and compassion as well as rage and desperation, a quality that many actors underestimate.

Guy Pearce also proves he can win an audience’s dislike. As Fernand, he carries the wicked edge of his Memento character to a snarling extreme.

Even though I was an English lit major in college, I still haven’t read the novel, so I cannot speak to how closely the movie adheres to its source. I imagine that many complexities are lost, and that the movie’s characters speak with far more contemporary, movie-ish language than those in the novel.

But for the most part I was encouraged to see an action-adventure challenge its audience to think for a while. Maybe, with this and other current releases like Memento and In the Bedroom, audiences will pause and consider the ethics of revenge, and question the typical big-screen endorsements of vigilante justice. Maybe all of those Ah-nold revenge epics will start to leave us feeling betrayed, as they should. I doubt, however, that action fans will bother to see In the Bedroom, or that they will stop to think about the wickedness in Memento‘s leading man.

Monte Cristo, in spite of its occasional moments of daring, remains a safe crowdpleaser. And as such, it’s far more admirable and enjoyable than most of its kind. 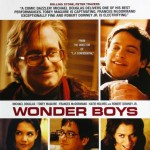