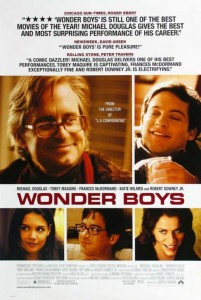 Mel Gibson, take note. Harrison Ford, look at this very very closely. You needn’t stay in the narrow confines of your past roles. You can step out. You can break new ground. You can re-invent yourself and remain interesting. Paul Newman did it, in The Hudsucker Proxy and Nobody’s Fool after all. And now Michael Douglas had done it.

For years, Douglas has been our most dependable sleaze-ball, a suit-and-tie mephistopheles with a flair for dangerous women and big money. Hopefully, those days are gone for good. Douglas has found a new character, a challenging role, and he’s made it the most interesting and engaging character he’s ever played. And Wonder Boys may be the best film to bear his name in the credits. It took some humility and good humor to play Professor Grady Tripp. The performance shows Douglas aging gracefully… and willingly, an accomplishment that only a couple of famous leading men — namely, Newman and Gene Hackman — have achieved in recent years.

In fact, there are a lot of similarities between Nobody’s Fool and Wonder Boys. In Nobody’s Fool, Paul Newman played a foolish but warm-hearted and endearing old man who learns that it’s never too late to turn your life around, to do something meaningful. The movie was far more interested in characterization than teaching, though, and this made the lessons within all the more powerful, because we believed in the characters so fully. It’s a great film.

Wonder Boys makes the same smart move. Filmed with the eye of an observant storyeller, and smartly written, it draws us into a specific community, full of individuals who defy our expectations and take on surprising dimension.

English professor Grady Tripp is an eccentric 60’s survivor who is more comfortable hanging out with his students than he is at the formal English Department events. In his home office, before the typewriter, he wears the pink bathrobe of an ex-wife. Occasionally he pulls on his black stocking cap and strolls out to the front porch for a puff of marijuana. He lives sloppily, moving through multiple marriages, disrespecting the establishment, and awkwardly bearing the cross of fame that he found when he published an award-winning novel, The Arsonist’s Daughter. But that day in the sun was seven years ago. His agent is hounding him for the follow-up, which is now thousands of pages long with no end in sight. And Grady just keeps showing up for work, sharing one of his two passions with his students… the love of good writing.

His other passion is secret… he’s in love with the wife of the arrogant chairman of the English Department. Thanks to Grady, she’s pregnant now, and he’s facing a tough choice: let her abort the child and keep her marriage, or take her up on her unspoken invitation to rescue her from the unhappy marriage and then raise the child.

As his students grope for meaning and order in the chaos of their lives, experimenting with drugs, sex, and nihilism, Grady tries to ignore his own waywardness, watching everyone else stumble into and out of trouble. One night at an English Department party, his most promising student, James Leer (Tobey Maguire), starts slipping down the slope to suicide. Grady intervenes… in the most casual way. But nobody can escape the inevitable consequences of moral apathy. Grady soon finds that he’s facing more consequences than he ever imagined, and he and the boy Leer are in a stolen car and running from the law.

The movie might have, at this point, become a wacky comedy of errors. What sets it apart is that director Curtis Hanson refuses to back away from his three-dimensional characters. The comedy stays convincing. As in that rare and wonderful buddy movie Midnight Run, one wild caper after another goes by without losing the film’s firm grip on the reality of the situation. Tripp’s bisexual agent Terry Crabtree (Robert Downey Jr., brilliantly cast) soon joins the adventure, pressuring Tripp to finish his novel, and investigating the publishing potential of young Leer even as he prods the boy toward sexual experimentation. Grady can’t believe what’s happening. Sneaking around the campus and the town, he slowly finds that his indifference and his infidelities have drawn him to the brink of disaster. Like Newman in Nobody’s Fool, he’s a fool alright, and he needs Aimee Mann to come sing her song from the movie Magnolia: “It’s not going to stop/ Until you wise up.”

Hanson’s last film was the tightly-wound suspense thriller L.A. Confidential. This is so entirely different, and still so accomplished, that actors will start lining up for his future projects if they’re not already.

What drew him to Michael Chabon’s novel about academia after a film about corrupt cops and Hollywood sleaze? Perhaps there are some common threads. Here is another world where appearances are deceiving, where the accomplished and successful live lives of secret sins, where even a simple good deed is a complicated and risky maneuver. Otherwise, this film is the tortoise to L.A. Confidential‘s hare; it’s strengths are in its leisurely tangents and in conversations after-hours rather than in fisticuffs and macho confrontations. Dante Spinotti’s camerawork is so inventive that even the slower chapters keep us busy investigating the busy lived-in rooms, the student backpacks bulging with details and secrets.

Unfortunately, the film’s last fifteen minutes finally let the sense of reality slip from its grasp. The conclusion shows too much of a transformation, too happy a result. In a situation as tangled as this, nothing so perfect is plausible; better to show us some growth, a deep sigh, and a resolution to do better next time. But I find it hard to be severe with Hanson for this. I feel that I’ve been privileged to step into another community and see people making changes in their lives for the better.

Among the comedies of the last decade, Wonder Boys stands out as a film of rare sincerity and hope. If it had come out three weeks earlier, maybe we would have seen Michael Douglas walk away with a well-deserved Oscar. 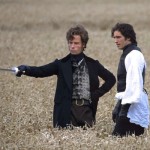