This review was originally published at Christianity Today on March 26, 2004.
–

There is an unforgettable scene in Dogville. It is unconventional, risky, unsettling, and it sums up writer/director Lars von Trier’s rage against human hard-heartedness. In a wordless moment, the camera, the actors, the stage and the silence offer us a sobering observation. All that comes before it has set the stage for this moment, when the movie makes its chilling revelation.

Like Jesus’ parable of the Good Samaritan, Dogville tells a simplistic fable of man who takes care of a stranger while others abuse and take advantage of her. Alongside its biblical references, there are echoes of Greek tragedy, Mark Twain, Nathaniel Hawthorne, and Flannery O’Connor. With its 1930s Colorado mountain town setting and the pleasant voice of its narrator (John Hurt in a brilliant unseen performance), the film’s most obvious allusions are to Thornton Wilder’s celebrated play Our Town.

Von Trier is ambitious to place his story in contrast to such essential mythologies. His films have always had an air of self-importance and indulgence. And yet, while his bombastic style would make Beethoven blush, it is hard to deny his visionary talent. With each film, he brings a sledgehammer to filmmaking conventions. Audiences are compelled as much by his innovations as they are by his willingness to wrestle difficult questions, no matter who gets hurt. Dogville,while not his most original story, becomes the first feature in which the ideas he presents make worthwhile the ordeal of sitting through it.

Again, von Trier has chosen a brilliant cast, led by Nicole Kidman. In Breaking the Waves, Emily Watson had the role that made her an international star. Bjork deserved the awards she won for her uncannily heartfelt performance in Dancer in the Dark. Kidman’s work, while not as complex, is memorable as well.

She plays Grace Mulligan, a beautiful fugitive sneaking up Dogville’s mountain to escape gun-wielding gangsters. She doesn’t get far. Moses the vigilant watchdog reveals her to the local philosopher, Tom Edison (Master and Commander‘s Paul Bettany).

Sensing her innocence, Tom takes Grace into his care. But it’s not just charity. Tom wants to teach his town a lesson. “I’ve got nothing to offer them,” Grace protests. He disagrees: “No, I think you’ve got plenty to offer Dogville.” Upon a second viewing of the film, that line becomes positively chilling.

Dogville seems a fine community at first glance — “Reserved but friendly, not without curiosity,” says the narrator. But you can’t trust this narrator. Von Trier, like David Lynch, zooms past the quaint exterior to reveal the evil at work behind closed doors. Dogville’s insular community is populated with self-protective liars who behave with contempt and defensiveness when strangers come to town. Tom sees Grace’s arrival as an opportunity to expose the selfishness of the townsfolk.

After Tom talks the town into giving Grace a chance, nobody seems to need her help with anything. She cannot find work. But she presses on, and soon finds a crack in Dogville’s cold façade. First, Ma Ginger (Lauren Bacall) lets her tend gooseberry bushes outside the general store, and eventually she’s invited into each home to serve some small purpose. She visits the local beauty (Chloë Sevigny), the sullen hard-working farmer (Stellan Skarsgård), the farmer’s wife (Patricia Clarkson), and Tom’s hypochondriac father (Phillip Baker Hall.) Like Amelie, Grace even becomes the eyes of the local blind man (Ben Gazarra, in the film’s most riveting performance).

That’s when things get nasty and the dark side of human nature rears its ugly head. One by one, the people begin to exploit Grace’s generosity. Viewers are sure to become quite uncomfortable with the extremes to which Grace must go to appease their baser appetites and keep her hiding place secret.

Okay — here is where that revelatory moment is played out. When one of these violations of Grace’s dignity occurs, the camera pulls back to the edge of town … and we can still see the crime taking place in the distance.

That is because Dogville takes place on a stage without walls. It’s basically a play on a minimalist set.

The film opens with a “God’s-eye view” (quite literally) of the town, complete with chalk outlines of homes, the shop, gardens, even the doghouse. When we see things from a human being’s point of view, at eye-level, we can stare past the townsfolk as they putter about in their enclosed worlds. With this one shot, one of many perfectly captured by cinematographer Anthony Dod Mantle, von Trier captures a powerful truth: We are closer to each other than we think we are. The barriers that divide us are porous, insubstantial and misleading. None of our sins are private. One person’s selfishness influences everything and everybody. The audience can see that, even if these characters can’t.

The graphic nature of this portrayal of cruelty will come as no surprise to viewers familiar with von Trier’s extreme tactics. The Danish director is preoccupied with stories of heroines whose kindness singles them out as a target for human evil. Once her tormentors are made aware of their sins, they would rather destroy the one who shows it to them than repent or seek healing. Only von Trier could (or would) transform Lauren Bacall from a small town shopkeeper to someone resembling Hannibal Lecter in just a few hours.

Hopefully, viewers will get past the shock to realize what von Trier is revealing. He is not merely a sensationalist, but his audacity tends to draw more attention than his storytelling. Dogville throws a lot of fuel on that fire.

Von Trier’s contempt for America is painfully clear here, even distracting. The film’s biggest flaw is the way it makes such a pointed and specific attack, an approach that lessens the story’s universality. Von Trier’s never been to America, but in Dancer in the Dark and Dogvillehe pictures it as a place almost devoid of mercy, love, or kindness, stained with a history of slavery, greed-driven capitalism, and luxuries gained through the exploitation of cheap labor.

It is worth asking whether any of his criticisms are deserved. Like it or not, America’s contribution to mythology is the story of the lone cowboy in the Old West who brings about justice his own way, with guns a-blazin’. In Dogville, von Trier brings the dynamic of vigilante justice back to America to unleash judgment of his own. In a sense, he’s saying, “How dare you call yourself a ‘Christian nation’ when you behave grace-lessly to the poor at home and abroad, and when you act in the arrogance of judgment elsewhere?” If this voice of conscience is “anti-American,” then so are many of our foremost artists, including the aforementioned Hawthorne and O’Connor—and Bob Dylan too.

To be fair, there is a possibility von Trier is including himself in the guilt of arrogance. Tom’s moralizing and self-righteousness could be a stand-in for the pious filmmaker. Tom’s the manipulative artist who “tunneled through … the human soul, deep into where it glittered.” (These souls do glitter, but more like hell’s embers than gold.) “I love you,” Grace tells him, “because you don’t demand anything of me.” But upon gaining her confidence, we’re told Tom feels “a fine sensation of mastery … new for him in terms of the opposite sex.” He, like everyone else, is assigned blame for the persecution of Grace.

But anyone arguing that von Trier is merely representing human failings will have a hard time ignoring the parting shot of the end-credits sequence, which shows pictures of Americans suffering and causing others to suffer to the tune of David Bowie’s “Young Americans.”

Another problem — this is von Trier’s third story about a gracious woman suffering terrible cruelty. This preoccupation courts accusations of sadism. His heroines seems to have “Kick Me” signs around their necks. Love seems to require them to sit still while they are persecuted to the point of absurdity. While there’s more restraint shown here than in Breaking the Waves, I fear that his audience will tire of running these relentless laps around the track of misery.

Still, many defended the wearying violence in Mel Gibson’s The Passion of The Christ by saying, “We have to face the truth of how Jesus suffered.” In that case, perhaps we can justify this portrayal of Grace’s suffering. She’s a Christ figure, after all. “I think I understand the folks in this town,” Tom tells Grace, “but when I try to decipher you, I get absolutely nowhere.” Sounds like von Trier’s own expression of bewilderment at the idea of Christ. Like Gibson, he portrays intense evil to make us wonder at the resilience and generosity of Grace, that “alabaster” saint who exemplifies her name … to a point.

Dogville concludes, however, quite differently than The Passion. Just when we think we know where this spiritual allegory is going, von Trier delivers an unexpected masterstroke that makes this his most profound work.

I will not spoil it for you, but I will say this: Dogville is, in the end, evidence that von Trier is wrestling with the difference between a God of fire and brimstone (what some would call “the Old Testament God”) and a God of grace (“the New Testament God.”) He poses the question: Should human beings who have been given so much be forgiven for their gross abuses of each other?

He comes to a conclusion that you may find deeply unsettling. But it may also provoke us to take even more seriously what a scandal Jesus Christ has presented to us — that God would not only love us, but would take upon himself the severity of the judgment for our sins. Dogville is thus a powerful expression of what those who reject Christ must consider as the alternative.

After seeing Dogville, a friend of mine said, “I think I’m going to start praying for von Trier. When your fundamental image of God is wrong, your view of the world is also wrong, as well as your view of yourself and all of the relationships in your life.”

Prayer may indeed be the best response to such a piercingly perceptive portrait of human evil. We can pray for the artist, that he will find peace and a deeper understanding of grace… although we must be careful not to presume that we know what he understands, because art does not necessarily reveal the opinion of the artist. We can pray for humankind, our nation, and our often-insular church communities, that evils akin those we see in works of art like this (bigotry, hatred, arrogance, selfishness, lust) will be exposed, confessed, and forgiven. But before we concern ourselves with others, we should search our own hearts. If we do embrace Christ’s promise of forgiveness and hope, we should ask to be kept from the temptation to judge others or exploit them. We should admit our need for grace, and seek to mirror his gentleness, his selflessness, and his everlasting forgiveness. 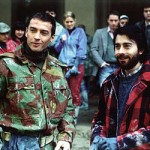 March 28, 2005 The Best of Youth (2003) - A Guest Review by J. Robert Parks
Browse Our Archives
Related posts from Looking Closer