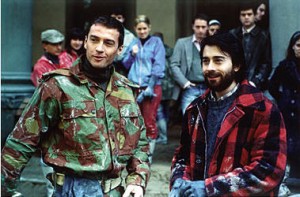 This is a guest review contributed by J. Robert Parks.

How can I convince you to devote six hours of your life to a single movie? Especially when that movie is an Italian film starring actors you’ve probably never heard of. And unlike Hollywood’s marketing obsessions, there’s no sex, little violence, and no special effects. Why would anyone travel up to Chicago’s Music Box theater (starting this Friday) for such a thing when spring is hopefully around the corner?

Well, let me put it this way. You may not find a richer, more engrossing story than The Best of Youth all year long. The narrative focuses on two brothers, Matteo (Alessio Boni) and Nicola (Luigi Lo Cascio). It’s the end of the university year, and both are studying for their oral exams. Literature student Matteo, in a burst of anger and frustration, walks out of his. Medical student Nicola passes with a high grade, in part because his professor credits him with the “sympathetic factor”–the belief that a doctor’s ability to be sympathetic to his patients is more important than what he knows. Surrounding these two figures are some of the most interesting characters I’ve seen in months of moviegoing-the bickering but loving parents, the older responsible sister, the younger sister who idolizes her brothers, the fellow student and friend, a beautiful but troubled young woman, an idealistic music student who protests against the government, a pretty photographer from Sicily. We watch all of them grow older and mature as the movie unspools their stories over the next several hours.

The acting is universally strong, and the ensemble work is exquisite. Nicola’s aging from a teenager to a man approaching old age isn’t quite believable, but every other character grows dramatically richer over time. And the movie’s patience means that we have the great joy of watching even minor characters reappear and surprise us. My favorite was the idealistic economist Carlo, so it was especially delightful for me to see his wedding that closes the movie’s first part and then watch as his family grows through the second. But I suspect each audience member will identify with a different person.

One of the great advantages of the film’s length is that it can let its characters develop slowly. Not every utterance out of someone’s mouth is the be-all-and-end-all of that character. Instead, the movie portrays life in the way that we live it, filled with little moments of joy and pain, tenderness and anger, rather than all-defining scenes of LOVE or HATRED or BETRAYAL, which is often how even good films have to handle their two-hour plots.

The Best of Youth takes a similar approach to history. The movie spans the years from 1966 to 2003 and deals with some of the pivotal moments in Italian society during that time: the 1966 Florence flood, the protests of the late ’60s and early ’70s, the rise and fall of the Red Brigade, the Sicilian Mafia’s murder of various magistrates. But Best of Youth treats these historical events as markers in time, not the all-consuming forces in which epics often revel. It realizes that for most of us, our lives are defined not so much by who was elected president but by the women we married, the friends we met, the children we raised, the parents we buried. It finds a beautiful balance between the personal and political, recognizing how the latter influences the former but never assuming that the grand gesture is more important than the small kiss.

That balance extends to how the characters perceive themselves. You might assume that a film with the title “Best of Youth” might privilege passion over experience, but that’s not the case. Neither, though, does it mock the follies of youth. It rather has the amazing ability to portray all sides with grace and understanding. The freedom and endless possibilities of the young and their burning desire to make a mark are held up as worthy of admiration. Even their naivety is embraced. Early on, Nicola travels through Norway and is compelled to exclaim, “Everything is beautiful.” And while the rest of the film casts doubt on that belief, the movie ends with another young man coming to the same conclusion. But the disillusionments and compromises of old age aren’t ridiculed, either. A small, funny rhyme happens late in the film when a much older Nicola curses a young man for driving too quickly. What Nicola doesn’t remember but we do is that he himself enjoyed speeding down the narrow roads as a younger man. It’s an ironic moment, but not a mean one. It doesn’t mock Nicola’s age but instead gently reminds us of how we all change as we grow older.

And while the movie may focus on its storytelling, it also has a sturdy visual style. Straightforward and realistic in most places, it also celebrates the Italian landscape. A subplot set on the island of Stromboli is an interesting counterpoint to Roberto Rossellini’s famous 1950 feature. More important, though, is the film’s theme of photographs. Director Marco Tullio Giordana presents them not only as personal mementos but also records of history, things that you pass on as well as objects that you share. They are a way to capture a moment in time but also a reminder of the fleeting nature of memory. Late in the film, Nicola is looking at a photo of his brother and reminiscing with an old acquaintance. “Remember that summer when we were young?” he asks. “Who was I?” The question is particularly piercing given who he’s talking to (I won’t spoil the surprise), but it’s one that can apply to all of us. And the film itself becomes a photograph that embodies all of these aspects.

Hopefully, this rave has peaked your interest. To make things even easier, the Music Box is showing the movie in two three-hour parts (separate admission required), with a screening of each part every day. So you don’t have to commit to the whole six hours. Check out part one, and if you like it, come back later in the week for part two. Given the film’s “sympathetic factor,” I’m pretty sure you will.

March 28, 2005 At last! Paul Thomas Anderson's got a new movie!
Recent Comments
1 Comment | Leave a Comment
Browse Our Archives
get the latest from
Entertainment
Sign up for our newsletter
POPULAR AT PATHEOS Entertainment
1