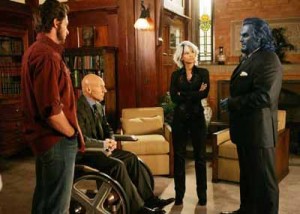 Okay, I’ve just seen a promising 90-minute highlight reel for an X-Men movie. It was wild! A beautiful lake exploded, and Jean Grey came back from the dead! Magneto declared war on humanity! And the heroes were joined by a big, blue, furry fellow who sounds like TV’s Frasier!

Wait… that wasn’t a long preview? That was the movie?

X-Men: The Last Stand, directed by Bret Ratner, achieves one clear objective. It establishes Bryan Singer, who directed the first two films of this series, as one of the great action movie directors working today.

Alas, we can only shake our heads and think about what might have been. Singer left the franchise to go and direct Superman Returns, leaving this third (and apparently “final”) chapter to Ratner. Oh how I wish Singer had stayed. He might have made this series the only saga I know to deliver three great installments in a row.

Okay, to be fair, Ratner’s direction here isn’t a disaster. In fact, he manages to sustain the look of the previous films fairly well, and he choreographs an army of characters through this complicated storyline without confusing the audience. But the script is far weaker, and Ratner isn’t able to conjure any truly memorable moments.

The Last Stand does have its share of big, noisy, even operatic sequences. The most arresting new character, Angel, who boasts a massive white wingspan that would make the angels in Wings of Desire sorely jealous, gets a great scene early in the film. But then the movie forgets about him, bringing him back for one moment of painfully contrived closure near the end. That’s Wasted Opportunity Number One.

Another eye-popping spectacle involves a levitating house with a hurricane inside, which culminates in a shattering, unexpected twist in the fate of the X-Men. But the special effects overpower the actors, and turn what should be a heartbreaking scene into so much sound and fury. The scene, like the scenery, falls apart. Wasted Opportunity Number Two.

Number Three involves Rogue, one of the two most interesting characters in the franchise. Here, she’s reduced to pouting jealously over her boyfriend’s infidelity. Anna Paquin’s expression of betrayal and dismay might be more of an act of rebellion against the movie’s mishandling of her character than an actual performance.

Wasted Opportunity Number Four: The first X-Men movies employed the characters’ powers in ways that revealed a great deal about their inner struggles. Here, Ratner seems more interested in using actors as projectiles than as characters. I lost track of how many times poor poor Wolverine was hurled into walls or trees.

The plot serves primarily as an excuse for scenes of mayhem, and Ratner’s mayhem is unremarkable. This time around, the villainous Magneto rounds up an army of mutants to try and eliminate a threat. “They want to cure us,” he declares, referring to the discovery of a mutant (Cameron Bright of Birth) who negates other mutants’ powers. “Well, I say they’re the ones who need the cure!” Okay, the X-Men comics aren’t exactly Shakespeare, but the series has inclined itself toward cultural relevance. And thus, these dramatic lines could be interpreted as a parallel to “de-gayification,” or to issues of “curing” various disabilities. Or it could be seen as raising the dilemma of a culture ruled by men who prefer conformity to diversity. But The Last Stand never really explores this territory. Like the villain, who wants his people to rush prematurely into war, the movie pauses for a few self-important lines on its way to to blowing stuff up.

What would have been different, had Singer stayed? I suspect he would have demanded a better script, one that allowed him to craft a more engaging storyline, sustaining the unconventionally substantial characterization developed in the first two films. The dialogue in this film is as flat as can of Sprite opened yesterday morning. And he would have slowed things down, giving the actors time to breathe during their scenes. The Last Stand has too many central characters, and not nearly enough time to develop them.

Further, we would have been allowed to see performances. Here, the actors have time to strike a pose and snap a line, and we’re on to the next thing. The only member of the team who really gets to act is Famke Jannsen, playing a resurrected and wrathful version of Jean Grey, but her story is so rushed and misguided that it’s hard to enjoy her work. Patrick Stewart is criminally underused. Hugh Jackman is reduced to smart-aleck lines in a character-devolution similar to Han Solo in Return of the Jedi.

Most unfortunate is the way that The Last Stand reduces the menace of Magneto. Ratner and company should have realized that it doesn’t make Magneto scarier when he wears that goofy helmet. And it’s almost embarrassing to see him escorted everywhere by a posse made up of unemployed members of Prince’s mid-80s entourage. When he speaks, I don’t sense that sinister intelligence that we encountered in the first two films. Even though the special effects impressively show us a younger Magneto this time around, he just seems like a grumpy old man. The whole Golden Gate Bridge routine–the film’s biggest special effects spectacle–seems to exist only so he can make a wince-worthy remark about “building bridges.”

Cyclops? Wasted. Mystique? Don’t ask. And what about the introduction of Beast, played by Kelsey Grammer? You can see Grammer’s potential in the part, but this film is too short to show us what he could have done with the character.

I had the privilege of visiting the set of X-Men: The Last Stand, and I watched Ian McKellen and Hugh Jackman face off in the woods. I’m grateful for the opportunity, and my friend who worked on the film is a professional’s professional. It was a fascinating experience and a memorable day. But it’s a shame to see so much energy invested in a film that either evaporates from your mind the moment you leave the theater, or, if you care enough, it makes you frustrated.

For me, the saddest thing of all is that this film’s failure will tarnish any future viewings of Singer’s great installments. Those films really felt like they were leading us toward something extraordinary. Instead, we get a culminating clash as surreal and anticlimactic as the showdown at the end of Ang Lee’s Hulk. Remember when Alien 3 came along and killed off all but one of the characters we had grown to care about right in the opening moments? As with that regrettable conclusion, I sat for the second half of The Last Stand wishing that we as fans had the power to send it back and say “do over.”

Alas, we’re stuck with this. The X-Men series almost earned that oh-so-rare triple crown. But this one limps along and staggers off the track early, leaving us to wonder what might have been. When Jean Grey starts gasping, “Kill me!” it’s like she’s the voice of the franchise, begging to be put out of its misery before things get any worse.