“Through a Screen Darkly” – An Evening of Celebration and Gratitude

“Through a Screen Darkly” – An Evening of Celebration and Gratitude January 20, 2007 Jeffrey Overstreet 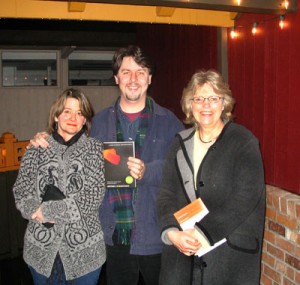 Last night, Linda Wagner (right) and her husband Larry (taking the picture) joined Anne and me for a late, celebratory dinner at Saltoro in Shoreline, Washington. We were celebrating, as you can see, the arrival of several big boxes of books… copies of Through a Screen Darkly.

It was Linda who first approached me at Seattle Pacific University in 1995 to invite me to join a writer’s group, and who co-edited an arts magazine with me called The Crossing for several years after that. For all of the years we’ve spent discussing that mysterious territory where faith and art intersect, this was the completion of a journey that we’ve shared.

And the evening also belonged to Anne (left), who has provided so many forms of support through the development and publication of this book — reading, editing, making sure I had everything I needed while I worked. I can’t imagine how I would have completed this project without her.

Of course, there are many people who belong in this photo with us… Marsha Marks, Don Pape, Lee Hough, Alex Field, Marlene Baer, the Promontory Artists Association, Mark Moring, a host of film critics, and, of course, my family. And many of you who are reading this. And all of you are welcome to join me on Saturday night, February 24, at 7:30 p.m., in the little town of La Conner, Washington, just about 45 minutes north of Seattle. The Next ChapterWe’ll be celebrating the release of the book at a bookstore called . I’d love to see you there.

I started writing the book in March. I finished it in June. I don’t think I’ll ever try to write a book in three months again… especially while also working a full-time desk job.

But there it is. It’s finished, and it’s on the way to mailboxes everywhere for those who have ordered it.

If you read it, I look forward to your comments. It was meant to be a conversation starter. Let’s talk.

For more information on the book, visit the Through a Screen Darkly site.

January 20, 2007 Death of an Angel
Recent Comments
5 Comments | Leave a Comment
Browse Our Archives
get the latest from
Entertainment
Sign up for our newsletter
POPULAR AT PATHEOS Entertainment
1