Question: What happens when a newborn baby ends up in the care of a lawless, gun-toting gangster?

Answer: That really depends on the gangster.

If Gavin Hood’s directorial debut, Tsotsi, is going to make a lasting impression on moviegoers, it will have to succeed on word-of-mouth reviews. It just doesn’t have the stuff that makes a flashy marketing campaign. Let’s skip the fact that most American moviegoers will have trouble pronouncing the title… Tsotsi is a tough, violent film about trash-talking thugs and hoodums in Johannesburg. And thus it’s probably not the kind of movie you’d go see expecting to be inspired. It includes no recognizable movie stars. And most American moviegoers will probably pass by a film set in a South African slum, especially if they have to read subtitles. (The characters speak Tsotsitaal.)

Take note: It’s time to turn over a new leaf. Tsotsi is one of the must-see movies of 2006. You’ll need a strong stomach, as the crooks who think they rule these shantytown streets are reckless, foul-mouthed, and willing to shed blood in order to get what they want. But don’t miss it. It’s the starkness of that darkness that makes Hood’s big screen adaptation of Athol Fugard’s novel such a satisfying story of redemption, the kind of thing to stir compassion in viewers’ hearts, and to remind us that sometimes God can reach even the most prodigal of his children.

Hood’s film follows a young gang leader through six days of crime, fear, and moral struggle. After he steals a woman’s car without thinking to check the backseat, Tsotsi (the name means “gangster”) discovers he has absconded with far more than he’d planned — namely, the woman’s infant son. Having never cared for a child before, Tsotsi debates whether to dump the child or to return him to his parents. But the cops are on his trail, combing the vast, chaotic Johannesburg townships for clues, and he’s forced to hide the baby in his apartment, keeping the screaming, hungry, frightened child concealed from his partners in crime.

Make no mistake — this isn’t another caper about childcare along the lines of Raising Arizona or Three Men and a Baby. This is a hard-hitting story about the tug-of-war between one young man’s sinful nature and the still, small voice of conscience that still whispers in his ear.

Some may view its tale of how a baby can melt a murderous heart to be sentimental or formulaic — and they’re right. But Hood gives the simple storyline a compelling urgency, as though it is a lament not just for this character but for the countless “feral” youth of South Africa, and for the families devastated by AIDS. His film has surprisingly jagged edges that get their hooks into you and pull you in, and he convinces you with a level of detail that speaks of first-hand experience with the people, their environment, and the economic crisis that divides them.

The whole endeavor is fueled by adrenalin-rush music, a blend of contemporary African styles called ‘Kwaito,’ which draws you along the troubling start to the riveting finale.

Fugard’s original novel was based in 1950’s South Africa, but Hood has done a fine job of updating the material, preserving its themes of conscience and redemption, while presenting audiences with an unnerving portrait of present-day Johannesburg, a sight that should spur viewers to deeper concern and braver action in serving a part of the world where God’s children are in desperate need.

Actor Presley Chweneyagae is well-cast, playing the strong, silent type of crook. He says very little, but he gives a complex and compelling performance, representing a generation driven by a need to survive, and lacking guidance and love.

And yet, Tsotsi succeeds in more than just illustrating African hardships. It also offers a powerful appeal for each viewer to appreciate the value of every human life, from infants to hardened criminals. It’s always worth remembering just how many great heroes have risen from lives of murder and crime. (King David and the Apostle Paul, to name two.) There’s no reason to believe it doesn’t still happen today.

As a Christian, I find myself surprised that the film has received so little attention and support in the religious press. With so many Christians speaking up in the media about the need for stories of redemption, it’s important that we acknowledge such a work when it arrives. Tsotsi is a vision of darkness and trouble, but out of its shadows beams a beacon of hope, like so many famous of scripture’s own redemption stories. In fact, it shines even brighter because of the authenticity and honesty in Hood’s depictions of darkness.

Moreover, the film also impresses upon us that crooks like Tsotsi don’t just materialize out of nowhere. Tsotsi is a boy without a family to care for him, without education to enlighten him about the consequences of his actions, and without role models to show him the way. He’s surrounded by a gallery of other gangsters, some like naïve children, others like soulless predators who look eagerly for an excuse to do harm. The damage that has wrecked their heads and hearts has not always been self-inflicted. Children learn about the world largely from their parents’ example. This is the key to finding compassion for Tsotsi, helpful in preventing others like him from straying off the straight and narrow.

So… if Tsotsi hasn’t developed a conscience through the tutelage of parents, clergy, or counselors, where does that still, small voice come from? He hasn’t had a role model to teach him right from wrong. Like the children of Calcutta’s Red Light district in the documentary Born into Brothels, who inform the camera that the men and women of their neighborhood are unequivocally wrong in their behavior, we have here another brilliant testament to the fact that eternity has been written in our hearts… that God’s voice is at work in all of us as we grow up, coaxing us in the absolutes of good and evil.

Finally, Tsotsi is a remarkable and rare work because of Hood’s willingness to give a crying, drooling, diaper-soiling infant so much time onscreen. This is not an idealized big-screen baby chosen to get viewers ooohing and ahhhing. The child confronts viewers with the vulnerability and need of this tiny human being. He is completely dependent upon others for survival. And actress Terry Pheto gives a sensitive portrayal of a woman who is willing to take risks in order to save him.

Does the scarcity of big-screen babies contribute to our societal disregard for infants and the unborn? Does our mainstream media shy away from visual reminders of our origins because it makes us uncomfortable and chips away at our pride and selfishness? If more filmmakers took the time to portray the beauty, fragility, and dependency of children, might we as a culture come to value them more?

For these reasons and more, I encourage you to make time for Tstosi.

January 18, 2007
Here they come! Copies of Through a Screen Darkly are On Their Way!
Next Post 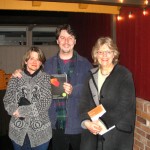 January 20, 2007 "Through a Screen Darkly" - An Evening of Celebration and Gratitude
Recent Comments
2 Comments | Leave a Comment
Browse Our Archives
Related posts from Looking Closer