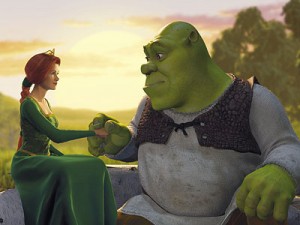 Anthony Lane at The New Yorker and Eric Metaxas at Books and Culture — these men are admirable and thoughtful critics. And both of them are upset about Dreamworks’ new animated movie. They  think Shrek is trying to teach us that we don’t need fairy tales.

With all due respect to writers whose work I have admired, I’m a little surprised that they’re missing the actual target of Shrek’s snarky and irreverent story.

Let’s start at the beginning: Shrek is a somewhat subversive fairy tale about a reclusive swamp-dwelling ogre who strikes a bargain with an egotistical, power-mad overlord.

The disgruntled ogre’s swamp has become crowded with fairy tale characters cast out of the castle where the wicked ruler Lord Farquand routinely tortures and abuses them. Shrek, demanding to be left alone in his unhappy existence, marches in to the castle and makes a deal: In exchange for a little peace and quiet back home, he agrees to rescue an imprisoned princess from a fire-breathing dragon so the conniving Farquand can marry her and become king. With sidekick Donkey in tow, Shrek ventures off on a journey that will teach him that the world does not have the right to call him ugly. Beauty… surprise surprise… is more then skin deep.

Even as it embraces a familiar fairy tale structure, Shrek pokes fun at the biggest Fairy Tale Dismemberment machine of all, Walt Disney Studios. The movie exuberantly and sarcastically skewers the clichés that have become Disney’s bread and butter, even as it pulls off some heart-warming and surprisingly meaningful storytelling of its own.

It’s also the flashiest animated feature yet from DreamWorks, the studio led by former Disney exec Jeffrey Katzenberg. With enthusiastic vocal performances by Mike Meyers (Shrek), Eddie Murphy (jabbermouth Donkey), Cameron Diaz (Princess Fiona), and John Lithgow (the moo-ha-ha menace Farquand), the movie never applies the brakes, plunging headlong through action, machine-gunning jokes, and innumerable pop culture references. It has an advantage in its devil-may-care attitude, which gives it a fresh and unique energy; but that same advantage dates the movie, shortening its shelf-life… and it makes the film off-puttingly cocky and arrogant. This doesn’t kill the fun, but it does unfortunately taint it with unnecessary flaws.

Still, while the film has an attitude problem, its primary observations are sound.

Shrek doesn’t want us to shrug off the beloved fairy tales of ages past… or even to critique them. No, this movie is dependent on the very fairy tale models that it lampoons. Rather than condemning traditional stories, I think Shrek is slamming what Disney has done to those stories by sterilizing them.

Disney studios and animators, with films like The Little Mermaid and Pocahontas enforces for children that only a certain Barbie-esque look is “beauty.” They also perpetuate a sort of pop culture paralysis, hammering into our heads the necessity of Diva-delivered pop anthems at any emotional turn in the story.

Worst of all, Disney force-feeds us contrived happy endings, contrary to the original fairy tales that aspire to tougher truths. Some of our best fairy tales soemtimes deliver tragedy and horror as well. (Read any Brothers Grimm lately?) Disney’s relentless happy-ending hysteria sets kids up for disappointment, and puts pressure on them to live up to superficial and materialistic standards of excellence. Better to take the long, hard road to a Joyful Ending — a substantial vision of hope — than to sell young imaginations a happy ending full of artificial sweeteners that eventually cause cancer.

[Update: Plenty of readers are answering Eric Metaxas’s critique in Books and Culture with objections.]

I will agree with many critics that Shrek is too reckless in its humor. Sex jokes and double-entendres are inappropriate in movies for children. And surely storytellers working with such vast resources could find something more inventive than the fart-jokes that fill what passes for “all-ages entertainment” in this country. But to some extent I agree with David Ansen at Newsweek, who asks, exasperated, “Why can’t scripts this smart and economical be written for flesh-and-blood actors?” He calls recent CGI movies like Shrek and Toy Story “throwbacks to the classical style of Hollywood filmmaking, where the story came first, the stars knew their place, and the movies were made to please the widest possible audience without stooping to the lowest common denominator.” While I do register a complaint about some unnecessary jokes in Shrek, I still agree with him.

But I also sympathize with Salon.com’s Stephanie Zacharek and The New Yorker‘s Anthony Lane, who express dismay at the film’s state-of-the-art animation. Lane summed up the complaint: “I don’t recall firing off indignant letters to Warner Bros. to complain about Wile E. Coyote and his insufficiently detailed snout. All I ever required of Road Runner was a drastic simplicity … and I still want the same thing.” Yes, digital animation can do marvelous things for movies. (Check out the effects in Moulin Rouge!) But must we waste resources and energy so we can pridefully show off our technical prowess in a kids’ cartoon? Toy Story‘s animation seems a good balance of skill and simplicity. Shrek, with its swirling 3-D Donkey fur, is perhaps taking things a touch too far. Don’t distract us from the storytelling with the latest technological flourish; use it only if it serves to enrich the storytelling.

Still, Shrek‘s pros outweigh its cons, making this overall a delightful and fun entertainment with a refreshingly honest message. You don’t have to look like Cameron Diaz to be beautiful. Beauty is a deeper thing. And plastic surgery is a waste of money. It is part of society’s downfall that we embrace the Princess Fionas when they’re glamorous rather than real.

While we owe many thanks to Disney studios for some of animation’s highest achievements, they have been asking for a rebuke like this for a while. Early on in the movie, when one of the characters prepares to break into a platitude-heavy pop song, the grouchy ogre furiously tells him to shut up, and the story marches on. Kids and grownups alike laughed and applauded appreciatively. That moment made the point brilliantly. For those of us weary of Disney formulas, DreamWorks’ Antz and Shrek are evidence of animation’s exciting future. Disney is like pop music for the masses, clean, cheesy and dreamy; DreamWorks is rock ‘n’ roll, rebellious, rowdy and real. Let’s hope Disney is paying attention. And let’s hope Katzenberg has worked out his grudge, and can now go on to stronger storytelling, leaving cheap shots and in-jokes behind.

May 26, 2008 Has Terry Gilliam Found His Don Quixote?
Browse Our Archives
Related posts from Looking Closer