Thanks again to Dr. Morefield for taking the time to give us an early look at an upcoming film. This time, it’s an American film by the director of Raising Victor Vargas.

It is supposed to be the world cinema and independent cinema at a festival that is, according to stereotype, so depressing. It can be, when it is supposed to be, but I’ve never been more depressed at a Toronto Film Festival screening than at Nick & Norah’s Infinite Playlist, and I don’t think it was supposed to be.

I am, I realized while watching this film, officially middle-aged.

I no longer understand young people. I don’t get what they see in Michael Cera. I don’t understand what’s so funny or glamorous about getting so drunk you are able to fish around in a vomit filled toilet for your cell phone. I don’t get the whole “friends with privileges” concept. (If it’s so commonplace, than isn’t there something doublespeakish about calling it a “privilege”? And isn’t the frank generation supposed to hate hypocrisy of all sorts, including verbal hypocrisy, above all things?) I don’t understand why so many people in their twenties and thirties are so nostalgic about a time in their lives they couldn’t wait to get out of. I don’t understand why you would want to be with someone who doesn’t want to be with you (okay, that one’s not unique to people of a particular age) or how sex can be casual and still be enjoyable (which is not the same as it being pleasurable). I don’t get why being an enabler is the highest form of friendship and why searching for a hidden rock band only makes finding it more satisfying while searching for true love isn’t worth the increased effort it might take over simply hoping that true love is searching for you.

There is one true moment in Nick & Norah’s Infinite Playlist, a film that I hoped would be a High Fidelity for a younger generation but avoided that film’s (and its source novel’s) attempts at coming of age by putting away childish things in favor of being an After Hours/Adventures in Babysitting atmosphere piece that purports to be about discovering your soul mate (musical at least) but is actually about being addicted to hooking up. In the film’s most true moment, Norah talks about breaking up with her boyfriend (or friend with privileges) of several years because she wanted to be “noticed” again. In that comment, I got a glimpse, albeit a small one, of the allure of a hooking up life style…it is the rush of potential…the experience of the moment where the other person could be the one.

The thing is, potential has to be watered with work and time before it blooms into a soul-mate relationship, and those qualities are nowhere to be found in a hook up culture that appears, as best I can tell to take the attitude that the faster you give up and move on the sooner you’ll cycle through all your failed loves and find that special someone. There is, then, something unintentionally ironic about the word “infinite” in the film’s title. That word is supposed to imply, I guess, that that magical moment can go on forever—that the point in time where one is so in love that one just wants to make mix tapes for the other person doesn’t have to fade.

There’s another word for being stuck infinitely in the same place. That word is hell. That the characters in the film desire that addictive feeling of the first pangs of love mixed with potential is understandable. That they can’t even imagine (and the film can’t imagine) the possibility of a deeper, stronger, fuller, sort of love is just bloody tragic. I don’t mean to suggest in some puritanical way that the film (or the culture it depicts) mistakes lust for love. I mean to suggest that it mistakes infatuation for love. You know what? I’ve been infatuated. It does have a “hurts so good” kind of glow to it that burns in your mouth like really dry gin, but it can’t hold a candle to being in love. Infatuation dissipates but love grows. All of which may be why my response to Nick and Norah was neither disapproval nor envy but pity.

Because despite Norah finally finding a guy that will bring her to orgasm and despite Nick finding a girl who will listen to and appreciate his mix tapes and despite Caroline’s relief that this time when she woke up from passing out the strange guys in the van she found herself in were not trying to rape her and despite the glee of an auditorium full of fans who would give their right pinkie to share a vomit flavored wad of gum with Kat Dennings or Michael Cera there was a sheen of sadness that permeated from the very pores of this film. Nick and Norah’s defenders—and there will be many if audience reaction at my screening is any indication—will say I’m just projecting my own feelings onto the film. Who knows, maybe, I am. But I’m suspicious of any person or film that tries this desperately to tell me that: a) they are having a good time; b) they are in love; or c) really, really liking the same band is a better foundation for a relationship than actually knowing the other person. 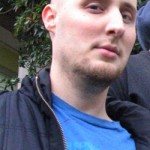