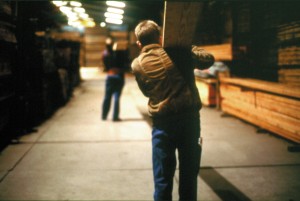 2012 UPDATE: Ten years ago today, Le Fils (The Son) played at the Toronto International Film Festival, sending a second wave of rave reviews around the globe. A few months earlier, the film had inspired audiences at the Cannes Film Festival; it was nominated for the Palme d’Or, won the Ecumenical Jury prize, and lead actor Olivier Gourmet won Best Actor.

I saw The Son at Seattle’s Grand Illusion theater in 2003, and knew immediately that I had enjoyed a film that would become a personal landmark for me in my moviegoing journeys. I was right. I look back to that day as the day I fell in love with the work of the Dardenne brothers, and a day when I lost my appetite for the excess of commercial American cinema. I had been losing that appetite for a while, but the strength of emotion that this film provoked in me, and the spaciousness it offered for questions, for exploration, for contemplation, and for interpretation was exhilarating. I have grown to love the film more every time I’ve seen it, and it’s among my all-time favorites.

It’s tricky to review the Dardennes brothers’ new film The Son without raising viewers’ expectations. If I rave about the film’s artistry, suspense, and acting, I’m likely to instill certain expectations in readers’ minds. The fact is, The Son — and all of the Dardennes brothers’ films, for that matter — are the antithesis of what most Americans consider “amusement” or “entertainment.” They are, rather, works of fine art, worthy of repeated viewings and close study.

The filmmakers have looked closely at a seemingly ordinary character and built a frame around him. We are invited to look at the picture. We are offered an opportunity to discover a profoundly moving story. But if we are to solve its mysteries, we must pay close attention, walk away, and then return to look at it again. “The truth must dazzle gradually,” said Emily Dickinson. The Son will dazzle you if you wait, patiently, thinking it through and discussing it. The effort you put into it will determine how much it rewards you in the end.

Olivier Gourmet won the Best Actor award at the Cannes Film Festival in 2002 (winning over Adrian Brody for The Pianist) for his role as Olivier the carpentry teacher in this latest film. He deserved it, just as the Dardennes Brothers have deserved widespread acclaim for their previous films, Rosetta and La Promesse. Gourmet’s performance is not striking , but it is exceedingly complex. And it comes across naturally. Olivier seems so real that the film takes on the feel of a documentary, and we wonder what is going on in his head during long silences as he washes dishes, does his daily sit-ups, and drives around the town.

This may sound tedious, but it is not. Right away, we sense Olivier has secrets. In his carpentry shop in the mundane Belgian city of Liège, he is teaching young boys how to measure, cut, and construct simple but solid things. He certainly does not look suspicious, blinking behind thick glasses, his expression opaque and unrevealing, his blue overalls as ordinary as they come. But he seems agitated. The handheld-video wavers, jumping anxiously from his shoulder where it shares his view, to across the room where we can see him observing his class. When a new boy named Francis (Morgan Marinne) arrives at the school, Olivier begins behaving strangely indeed, dashing down hallways so he can spy on the newcomer. Viewers may well begin to suspect that Olivier is a sexual predator, or perhaps a criminal fearing to be recognized.

But no, the truth is much more interesting. To say more about it would be to rob you of the reward of investigating for yourself. Suffice to say that there is a connection between the man and the boy. He knows it. The boy does not. And as they begin to work together and get to know each other, we begin picking up hints, slowly putting the puzzle together in our heads.

The Dardennes Brothers’ technique is to try and capture things without enhancement, without directing our attention to details. And yet, by giving us this extreme-close-up view of Olivier, by following him through routines again and again, the filmmakers begin to reveal what is important to him—accuracy, craftsmanship, discipline, second chances, kindness—and the elements of his daily life take on heavy metaphoric significance.

It seems a very deliberate choice of the storytellers that Olivier is a carpenter. As he carefully trains the boys in the importance of exactness, of cutting things “just so” and making sure the lines are straight, he is really speaking to them about their lives. As he carries heavy beams around the shop, he is giving us a picture of the hard work of bearing one’s moral responsibility, and of going beyond that, to take and bear someone else’s cross. In fact, the Dardennes have commented that the film could just as well have been titled “The Father”, a remark that argues further for a religious interpretation of the events depicted.

If we must call anything “Christian filmmaking” (and I would prefer that we didn’t), then I would recommend that we erase its current definition — which is associated with shoddy propaganda films for Jesus — and associate it instead with films that share the mysterious nature of Christ’s own parables. No one in this film professes to be a Christian, but actions speak louder than words. Even if the Dardennes were to insist that their characters have no religious affiliation, Olivier’s choices still add up to a passion play. This is as pure a “movie parable” as you’re likely to find.

Jean-Pierre and Luc Dardennes got started in filmmaking much the same way that Kryzysztof Kieslowski did — making political documentaries. As they have graduated into fiction, they have maintained that sense of realism, that avoidance of the adornments we have come to expect from big screen films. This film probably qualifies as a Dogma 95 film in its avoidance of external lighting enhancements, makeup, soundtrack, and special effects. But where Kieslowski’s themes were more questioning and philosophical, the Dardennes Brothers seem preoccupied with the routines of the working class, with the demands of survival. Rosetta’s story seemed to be one of survival over morality. But here, there is a deeper spiritual exploration at work. Rosetta was a journey of determination and practicality. The Son is a story of the spirit, of extraordinary courage and forgiveness.

Hold on, though. I’m concerned that when I say the film is about forgiveness, you will decide right away what kind of ending it has. You will be wrong. There is no “moral to the story.” There is no teary-eyed breakdown, no embrace, no swelling of the soundtrack. We don’t see Happily Ever After. Instead, we come to a deeper understanding of the difficulty involved with real forgiveness. We learn precisely because the film refuses to satisfy our desire for unrealistic emotional closure. We come away unsure whether the outcome of Olivier’s choice will cause him further difficulty, or whether he will be rewarded with peace and joy. Just like in real life.

I wish I could talk to you about the last moment in The Son. It is a perfect example of the artists’ genius. It is a seemingly arbitrary moment. And yet, in view of all that has come before, what we see onscreen is loaded with significance. It is meaningful in what we see the characters choosing to do. It is meaningful also in what the picture resembles. Watching them go about a simple task, I suddenly felt a chill run down my spine as what they carried suddenly seemed loaded with symbolic significance. This came without a single word from the actors. It happened because I was thinking about what I had observed, not what I had been told.

This is as fine an example as the cinema has to offer regarding the power of showing rather than telling. It is a manifestation of the first, most challenging, most rewarding rule of art.

I hate to end this review on such a vague claim, but perhaps you will see the film, and perhaps you will think to drop me a note and tell me what you think about the significance of that last image. I’ll be interested to see if you’re thinking what I’m thinking. Or if you have discovered something even more exciting. 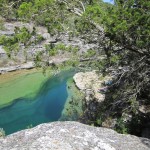 September 10, 2012
A Best-Selling Brain Scientist, a Renowned Memoirist, a Grammy-Winning Rock Star, a Legendary Book Reviewer, a Celebrated Poet, and a Fantasy Writer Walk Into a Texas Retreat Center...
Next Post