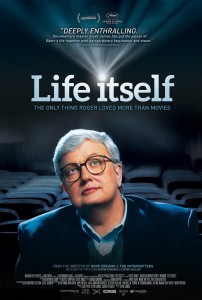 “Drama holds a mirror up to life, but needn’t reproduce it.”

Roger, Roger, Roger. Here I am watching a film about your departure, and I’m still jotting down things you said that will be worth quoting in my own film reviews.

There is a lot to love in this — Steve James’ raw, honest, and reverent documentary about the life of Roger Ebert.

Surprisingly, one of the most admirable aspects of the movie is that it is also a revealing, respectful look at the life of your longtime partner and nemesis, Gene Siskel.

I have written in my own film-reviewer’s memoir — Through a Screen Darkly — about how much the two of you meant to me in my childhood. I owe you such a huge debt of gratitude. It was fascinating to look behind the scenes at your rise as a journalist, your rigorous standards as an editor, your contentious relationship with Siskel (which brought out the best and worst in both of you), and your inspiring marriage to Chaz. I’ve been wounded by those self-righteous, judgmental “Christian media” voices that have condemned you for your “worldly” perspectives. Your attention to, and enthusiasm for, excellence, artistry, beauty, and truth have been one of the most instrumental influences in my life, drawing me closer to God and to an apprehension of life that humbles and blesses me.

Of the many amazing testimonies and anecdotes offered in this film, I was particularly moved by the words of Martin Scorsese and the testimonies of other filmmakers regarding what it meant for someone to come along and really pay attention to what they had done, to really care about helping audiences see.

And while we’re on the subject, Roger: I love Steve James, too; he was the best choice to direct this film. His films Hoop Dreams and Stevie are two of the finest documentaries I have ever seen — they have elevated the art form. I appreciate the clinical honesty he employs throughout this film — honesty that you insisted on.

But something tells me that the movie might have been a greater testimony to your life and your passions if it had been invested with more imagination, and little less focus on your hospital trials, and even fewer of the standard talking-head testimonies. As you yourself once wrote, “A movie is not about what it is about. It is about how it is about it.”

Having said that: Roger, you remain one of the ten most influential human beings in my life, and I am grateful for your work. It was a blessing to be invited with Mr. James into your last days and struggles, and to be reminded that, while you were irascible at times, you were more interested in helping us embrace life than in persuading us to be impressed with you. 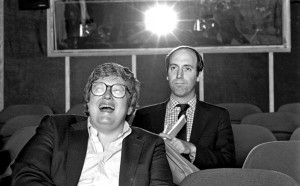 I suspect that God marveled at your passion, enthusiasm, intellect, and insistence on truthfulness. For good reasons, you had other “names” for God, other ways of engaging God, than most of us. But it seemed to me that this came from your drive for authenticity, and your refusal to let the Wonder and the Mystery be boxed up and exploited the way the Almighty so often is by those who prefer to resolve questions rather than explore them. (Perhaps this has something to do with why Terrence Malick’s The Tree of Life and To the Wonder — the film you reviewed last —  resonated so powerfully with you.)

Whatever the case, may you rest in God’s mercies and know his peace.

[Does this review seem familiar? It was first published on Letterboxd. Folks who follow me on Letterboxd often see my first-impression notes and reviews before they’re posted here.] 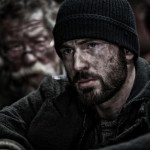 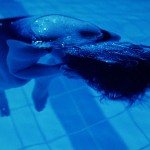 September 2, 2014 Best Use of Music in a Movie: Share Your Favorites
Browse Our Archives
Related posts from Looking Closer