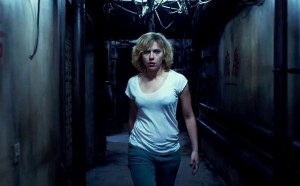 “I have a confession to make,” said a former professor of mine when we sat down to talk over lunch.

“Okay,” I said, a bit anxious, stirring the ice cubes in my tea.

He ran his fingers through his hair until it stood up straight. He glowered down at the shrimp in his stir fry. He sighed and said…

“And it was … it was just awful. It was so awful. That movie… it doesn’t have a single idea in its stupid head.”

Well, there’s a review of the new film by Luc Besson for you. But it’s just one review. I haven’t seen Lucy yet — I’ve been out of town at the Glen Workshop for the last couple of weeks. But the clash of opinions about it among critics I respect has been entertaining and intriguing. Some are exasperated by the film’s apparent stupidity. Others, admitting that the film is pretty stupid, are nevertheless reveling in the cinematic energy of it.

David Ehrlich, who reviews movies for The AV Club and The Dissolve, offered some off-the-cuff comments at Letterboxd:

… it packs more raw cinematic energy in 80 minutes than the Marvel universe has in 80 films (there are 80, right?).

Ken Morefield talks about Lucy in a podcast at The Thin Place.

Lucy is a summer popcorn movie, to be sure. But when a movie has this much God symbolism, you can bet The Thin Place is going to ponder what it all is supposed to mean…

At Christianity Today, Alicia Cohn is frustrated by the film:

… Lucy, despite the promise of the trailers, is not a movie about a woman drawn into a sci-fi scenario of superhuman enhancement. It’s a movie about tapping the full potential of humanism through drugs in which writer and director Luc Besson uses Johansson as a stand-in for a characterless stage in human evolution. … [It’s] particularly disappointing because the trailers suggest a journey by the title character toward controlling her own circumstances, while the movie actually portrays a woman who is the puppet of external forces.

Christopher Orr at The Atlantic warns readers about spoilers, but then rants:

… [W]hile Besson has made very, very bad films in the past—most recently, last year’s The Family—this is the first time he has made a film so idiotic that the only way to properly convey its flaws is to enumerate them.

And then he does.

But in a conversation at Arts and Faith, my colleague Christian Hamaker says,

It took about 20-30 minutes for me to realize just how much I was enjoying Lucy. It’s an energetic piece of filmmaking, and the audience laughed several times during the film. I never felt like it was mocking laughter of the what-sort-of-lame-film-is-this-anyway variety, but maybe I misread the audience’s reaction. I know only that my own laughter was caused by the pleasure of seeing well-executed action filmmaking….

I enjoyed far too much of Lucy to spend a lot of time discussing what I didn’t care for in it. Wanna hash out the implications of the plot? Go ahead. I’ll be standing in the corner, looking for others who didn’t take the film all that seriously but enjoyed it on other levels.

And Matt Zoller Seitz at RogerEbert.com sticks up for the movie too:

… you’d be hard pressed to identify one idea, scene or element in the picture that is not a cliche.

But the total package feels fresh.

“Lucy” is a fun, confident work. It’s fast and tight and playful even when it’s sadistic and violent, which is often. It lasts about 90 minutes and change but feels longer in a good way, because every second is packed tight. It’s full of itself, yet it still keeps winking at you. It wants to be taken seriously, but not so seriously that you don’t laugh at (and with) the sight of Lucy strolling into a gunfight wearing nosebleed heels, or making enemies writhe like marionettes on invisible strings. The movie is alive. It pops. 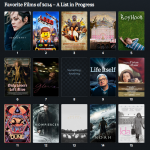 August 12, 2014 Who Among Us Is Thirsty? — A Reflection on the Loss of Robin Williams
Browse Our Archives
Related posts from Looking Closer