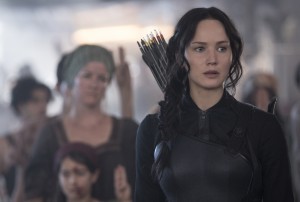 …because the role that’s making her iconic is about a young woman who becomes an icon for a whole world, who willfully plays the game of celebrity while trying to maintain her integrity, knowing that she’s being exploited, knowing that the people who love her now could turn against her in a moment, knowing that the media exploiting her only gives her this glory so long as it serves their ends.

Whatever the case, in The Hunger Games: Mockingjay — Part 1, she’s sensational. As Katniss Everdeen, Jennifer Lawrence is so committed, so persuasive, so emotionally authentic that she could walk into any other franchise we’ve got right now and steal it away from the leads with a single scene. 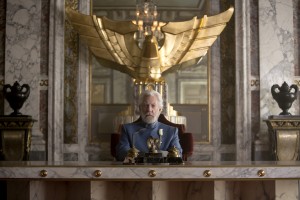 It matters that everyone around her makes an impression anyway — especially Woody Harrelson and Julianne Moore. Donald Sutherland could have phoned in his performance as the villain, but in his few screen moments he creates something truly diabolical here. Even though we know he’s going to beat the rebels at their own game in this one, still, the sight of him smiling through static on a screen near the end is absolutely chilling.

I hate the word “relevant,” but for lack of a better term, I can’t imagine a more relevant dystopic vision for today’s fantasy-saturated audiences than this one, or a series I would be happier to see young people reading, watching, and discussing. Our futures will be shaped by the capacity of rising generations to challenge and test what their screens and gadgets tell them about the world, and The Hunger Games is a parable for them, about them, summoning them to demand freedom, human rights, and the truth.

The ironies run deeper with each chapter as this conflicted heroine, so broken by loss and trauma, marches farther and farther along the road of rebellion, uneasy with the ethical compromises, unsettled by demands upon her to play the role of an avenging goddess when each arrow she launches will cost more lives among her oppressed people. 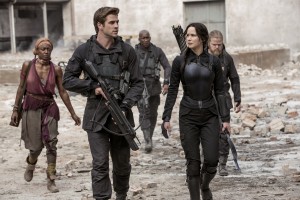 Some roll their eyes at the seemingly constant pathos and the high emotions of this series — oh, teen angst! — but I haven’t felt many false moments. The emotions seem earned. And in contrast to Peter Jackson’s “Tolkien Epic Fail” — a series undone by excess, in which the love for violence has undermined and nearly erased Tolkien’s honorable themes — this is a series in which every single episode has been integral to the storytelling. And contrary to almost every adventure series in recent years, the violence in The Hunger Games inspires not exhilaration and an appetite for more, but dread first, then dismay, and — inevitably — grief … which is as it should be.

It’s almost impossible to critique Mockingjay – Part 1 as a film because it’s only a chapter. But it’s an essential chapter, efficiently edited so as not to do the Jackson Sprawl, advancing the story and developing characters with every exchange, winding this epic so tight that I have high hopes for the concluding chapter — hopes I can’t say I’ve felt for any franchise since the moment the lights went down for The Two Towers. Bring on Mockingjay – Part 2.

November 21, 2014
Which Movie Captures Your Part of the World? Tell Me, and You Might Win a Great Book.
Next Post

November 24, 2014 Coming Not Soon Enough to a Troubled Neighborhood Near You
Recent Comments
2 Comments | Leave a Comment
Browse Our Archives
Related posts from Looking Closer

2 responses to “The Hunger Games: Mockingjay – Part 1 — My First Impressions”