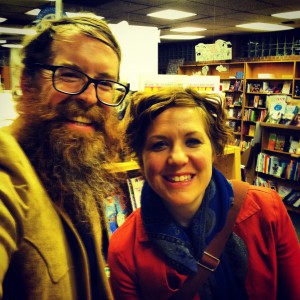 “David Taylor is one of the leading pastors in the church’s effort to reach out to artists.”

Thus sayeth the visionary painter Makoto Fujimura in his high praise for the anthology of essays about art and faith called For the Beauty of the Church: Casting a Vision for the Arts.

I first met W. David O. Taylor and Phaedra Taylor at Laity Lodge several years ago, and we only scratched the surface of our first conversation about art and faith. It was enough for me to discern that they were kindred spirits. Since then, alas, our conversations have been brief, fragmentary, fleeting — partly because we’ve been separated by distance and busyness. But I followed his progress at Diary of an Arts Pastor. And I’ve watched and admired the way David and Phaedra have followed the call upon them — moving from place to place and applying themselves in different capacities in order to inspire artists, cultivate art, and instill wisdom in churches about the forgotten purposes and powers of the arts.

They’re quite a couple — David and Phaedra.

He was born and raised in Guatemala City. She was born in Scotland, and moved to Dallas at age 13.

David studied at the University of Texas, Georgetown University, the University of Würzburg, and Regent College in Canada. He has degrees in theology and biblical studies, and earned his  ThD at Duke Divinity School, mentored by Jeremy Begbie and Lester Ruth. Phaedra earned a “Most Outstanding Student in the Visual Arts” award as she completed her BFA in sculpture at the University of North Texas. 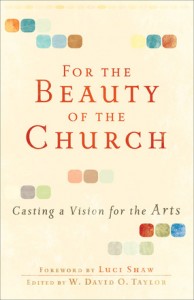 For 12 years David served as a pastor at Hope Chapel in Austin, Texas. Phaedra interned at the Chinati Foundation, in Marfa, Texas.

In 2010, David edited For the Beauty of the Church: Casting a Vision for the Arts (Baker Books), featuring contributions by Eugene Peterson, Andy Crouch, Lauren Winner, Jeremy Begbie, and more. I’ve seen his work in Books & Culture, Christianity Today, and Comment … and that’s only a few of the prominent journals that have published his work. Currently, he serves as Assistant Professor of Theology and Culture at Fuller Theological Seminary, and he is the director of Brehm Texas, an initiative in worship, theology and the arts. He is ordained as the transitional diaconate in the Anglican Communion of North America.

Phaedra has explored encaustic painting, printmaking, watercolor and assemblage, and her work has been exhibited around the globe. You can check out her work at etsy.com/shop/pjeanartmachine, etsy.com/shop/ambrosium, etsy.com/shop/bonnyblythevintage, and pinterest.com/phaedrajean.

They live in Houston with they are raising an altogether different work of art: a young daughter.

And guess what: They have some favorite Christmas music.

Tomorrow night is Christmas eve, and Looking Closer’s Christmas playlist parade is almost over. It seems right that David and Phaedra, whose live their lives in a fusion of art and faith, would take us a few steps closer to blessed event.

Phaedra and I were sitting at the breakfast table last Saturday. We each had our cups of Ahmad black tea. Blythe and I were eating the gluten-free pancakes we had just made, while listening to Sesame Street music through our Spotify account. Phaedra suggested we change things up and listen to an album by Pete Seeger. We pushed play and waited for the music to play, presumably from his “Traditional Christmas Carols” album. Instead we heard his voice. At first we thought this was simply an introductory commentary to the album.

As it turned out, Seeger kept speaking and the story he told quickly captured our attention, so much so that we stayed at the table for another forty minutes, listening, drinking down the pot of tea, giving each other looks that said, “This is amazing.” We eventually learned that the story he recounted had been written by Sholem Asch. A prominent Yiddish author, in 1939 Asch wrote a long novel in Yiddish, The Nazarene, about the life of Jesus. As the Smithsonian Folkways web page puts it:

“A few years later, at Moe’s urging [Sholem’s son and Folkways founder], Asch wrote a shorter work on the Nativity in English that would be of appropriate length for a phonograph record. The story remained unpublished and unrecorded until this Folkways release in 1963. Moe Asch was of the belief that the story should be recorded by ‘someone with an affinity for art and the folk idiom, and with a deep sense of social understanding as well.’ He decided on Pete Seeger (1919–2014), the legendary folksinger and activist. The recording also includes Seeger singing six Christmas songs. The liner notes provide background about the recording and Sholem Asch, and the text of the story.”

It is a remarkable re-telling of the Nativity story. Historical fiction in the spirit of Frederick Buechner, Walter Wangerin, Jr, Anne Rice and David Maine, Asch’s narrative finds its perfect match in Seeger’s voice. If you have a moment, or an hour and six minutes to be more exact, hear the story of Jesus, Joseph and Mary for the first time again. (You can buy it here on ITunes or here or here or on your own Spotify account.)

Yes, it’s not a song. It’s a reading. But when Pete Seeger reads it, the musical quality of his voice makes it sound like a song.

The Brilliance: Advent: Volume 1: “A Light”

The whole album is gorgeous, and it seemed impossible to choose just one song. This haunting song is pure loveliness. It helps me (Phaedra) imagine what it must have felt like to look up in the sky and to see a light like you’ve never seen, and then in one all-too quick moment for it to be gone. What stomach-churning longing would you have been left with? Knowing that it was perhaps the most beautiful and confusing moment you had ever had, and that you would most likely never see it again. Without any video footage to capture the image, you would have to rely on your own memory and the shared memory of your friends to keep the moment alive in your heart.

This sixteenth-century French carol has long been a favorite of mine (Phaedra). The line “Christ is born to the folk of the village” makes me think of how Jesus continues to come, quietly, largely imperceptibly, into unremarkable villages all over the earth. He comes to us: to village folk, to simple folk whose sense of need is persistent and acute.  I love the picture of children carrying torches to announce the birth of Jesus, and these dual voices so perfectly fill my ears with a sweet, delightful song.

I (Phaedra) love the minor key in this song and how its simplicity conjures up images of campfire singing or fireside family music. The consumer Christmas culture inundates me with worry and over-stimulating noises. This simple combination of voice and guitar provides a sharp antidote. It also helps me to do what often feels impossible: to stay content when everything around me is telling me that I should feel dissatisfied with what I already have.

This beautiful song, tinged with sadness, is a balm to those with hearts that ache feelings of severe disappointment and devastating loss. While starting slow and quiet, the lament builds into a victorious wishing of a Happy Christmas despite all the hurts we bring into this season. We especially love that the word “friends” is used in this song. So many people do not have families (like Phaedra’s family of origin) with whom they are able to enter into the full celebration of Christmas. It’s nice to hear a song that embraces a Christmas with friends as a full and beautiful thing.

(This is a live recording so you’ll have to bear with the audience out-of-tune, singalongy quality.)

December 24, 2014 Nurse Claire Nieman Presents a Christmas Playlist
Browse Our Archives
get the latest from
Entertainment
Sign up for our newsletter
POPULAR AT PATHEOS Entertainment
1