Love Is an Orientation

Elevating the Conversation with the Gay Community 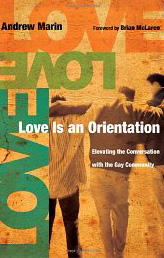 Awards for Love Is an Orientation:

Andrew Marin’s life changed forever when his three best friends came out to him in three consecutive months. Suddenly he was confronted with the gay, lesbian, bisexual and transgender community (GLBT) firsthand. And he was compelled to understand how he could reconcile his friends to his faith.

In an attempt to answer that question, he and his wife relocated to Boystown, a predominantly GLBT community in Chicago. And from his experience and wrestling has come his book, a work which elevates the conversation between Christianity and the GLBT community, moving the focus from genetics to gospel, where it really belongs.

Love Is an Orientation Participant’s Guide with DVD

Practical Ways to Build Bridges with the Gay Community 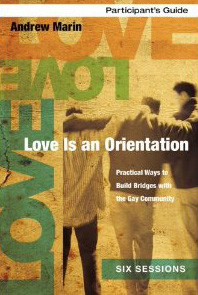 Much of today’s culture defines bridge building and reconciliation as a one-way street that leads to full theological, political and social agreement. Yet Christ demonstrated a different path of religious and cultural engagement to establish his kingdom here on earth. In light of such countercultural principles, the Christian community needs a new view on the issues that divide conservative believers and the lesbian, gay, bisexual and transgender (LGBT) communities. Using the practical applications Andrew Marin has learned over the last decade of living and working in the LGBT neighborhood of Chicago called Boystown, as well as his international speaking and consulting ministry, this six-session, video-based study offers a variety of practical teachings, insights and life lessons. Rather than avoiding the topic of homosexuality, Love Is an Orientation aims to equip the Christian community to bridge the gap between LGBT and religious communities. This is not a group study about ‘fixing’ gay people. It’s about getting to know them, engaging them, and loving them like Jesus does. After this study, you, your small group and your church will know what it means to peacefully and productively build bridges with the LGBT community.

Belong, Believe, Become: One Pastor’s Journey to Hugging a Man in his Underwear by Nathan Albert (Winter 2014)

“Theology of Embodiment as Healing between the Church and LGBT Community” in Doing Theology for the Church’s Mission (Winter 2015, forthcoming) by Wm. B. Eerdmans. Edited by Tom Noble and Jason Sexton.

Matthew 10 in The Way Bible (March 2012) by Tyndale Publishers. Edited by Mark Ostriercher.

Winner Take All? — A Political and Religious Assessment of the Culture War Between the LGBT Community and Conservatives (Journal of Political Theology, August 2011)

Why the Giglio Debacle isn’t the end of Public Evangelicalism (Leadership Journal, January 2013)

Andy Stanley, Al Mohler and the Theological Tensions of Homosexuality (Leadership Journal, May 2012)

What is an Evangelical? (Sojourners, October 2011)

From HIV to HAI (People of the Second Chance, #LabelsLie Campaign, January 2012)

Toward a Better Future for Gays at Evangelical Seminaries (Patheos, November 2011)

When Jesus Quoted the Old Testament…And Why It Matters (Red Letter Christians, May 2011)

When Teen Suicide is a Mainstream Medium (Crosswalk, October 2010)

Evangelicals and Gays: A New Medium of Engagement (Patheos, April 2010)