St. Monica on Parenting: When do parental responsibilities end? 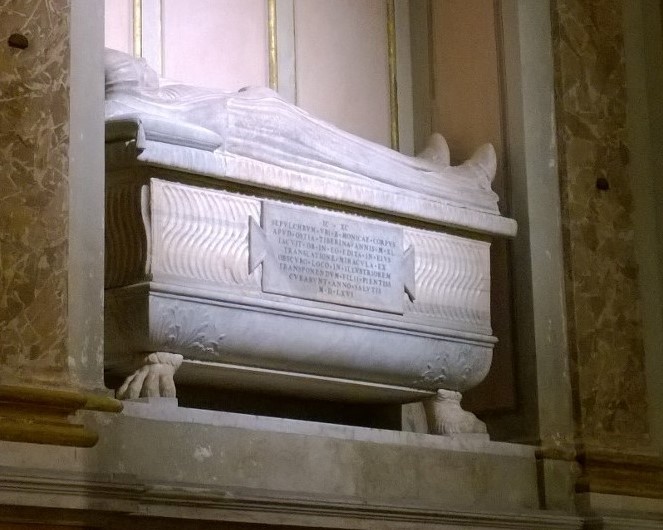 When I was in Rome attending a seminar for journalists last September, I happened upon the tomb of St. Monica.

It’s in the Basilica of Sant’ Agostino, just around the corner (literally) from the Pontifical University of the Holy Cross where my classes were held and near Piazza Navona.

I was scoping out places for daily Mass, and discovered the basilica. Once inside, I wandered the aisles and explored the side altars and alcoves, taking in the beauty and history (the original Madonna di Loreto by Caravaggio hangs toward the back).

I found her in a small chapel on the front left side of the church.

When I first saw it, I assumed it was just statuary. When I went closer, I saw the inscription.

It was truly the tomb of St. Monica.

Ever since I became a mom – and especially as my kids move further into adulthood – I’ve felt as though St. Monica and I are kindred spirits. In particular, we share the same philosophy on raising our children.

Parenting doesn’t end when they turn 18. Parents remain spiritually responsible for their children unto death. And beyond.

She worked hard to raise her children as Christians in spite of her abusively temperamental and pagan husband, Patricius.

When Augustine, as an adult, took to carousing and fell into the Manichean heresy, she strongly voiced her concern and disapproval.

She wept, prayed, and fasted for her son’s conversion.

She followed Augustine, his mistress, and son, Adeodatus, to Rome, even though Augustine had tried to give her the slip.

She trailed him to Milan, still patiently praying, fasting, and weeping for her son’s conversion.

Finally, Augustine came under the good influence of St. Ambrose, then bishop of Milan. Ambrose and Monica were friends, and I suspect that had some impact on the relationship between Augustine and Ambrose.

Augustine converted to Catholicism and became one of the Church’s most famed and loved saints of all time.

I’ve asked myself many, many times:

What would have happened if Monica, like most modern-day parents, had washed her hands of Augustine when he turned 18?

St. Monica got it right.

She understood something that few other parents do:

Parents are responsible for their children’s well-being for their entire lives.

Their spiritual well-being. That’s not the same as being a helicopter parent, hovering and constantly trying to govern everything your child says and does. Children must learn to make their own decisions and take responsibility for the consequences. They need to learn to manage their own affairs and are entitled to privacy in their affairs.

They are not entitled to spiritual demise because a parent held back on offering spiritual assistance (i.e., prayer, fasting, and even weeping) or refrained from pointing out imminent spiritual danger.

Look. “Admonish the Sinner” is the third spiritual act of mercy, according to the Church. By “sinner” is meant any sinner, not any sinner except your over-18-year-old children.

Here it is in the Catechism of the Catholic Church, emphasis mine:

The works of mercy are charitable actions by which we come to the aid of our neighbor in his spiritual and bodily necessities. Instructing, advising, consoling, comforting are spiritual works of mercy, as are forgiving and bearing wrongs patiently. The corporal works of mercy consist especially in feeding the hungry, sheltering the homeless, clothing the naked, visiting the sick and imprisoned, and burying the dead. Among all these, giving alms to the poor is one of the chief witnesses to fraternal charity: it is also a work of justice pleasing to God. (CCC, 2447)

I have, not only the right, but also the obligation to charitably and prudently advise my children in regard to spiritual matters regardless of their age or state of life.

Here it is in the Gospel of St. Matthew:

Jesus said to his disciples:
“If your brother sins against you,
go and tell him his fault between you and him alone.
If he listens to you, you have won over your brother.
If he does not listen,
take one or two others along with you,
so that ‘every fact may be established
on the testimony of two or three witnesses.’
If he refuses to listen to them, tell the church.
If he refuses to listen even to the church,
then treat him as you would a Gentile or a tax collector. (Mt 18:15-17)

Jesus said, “your brother,” meaning both kinsmen and non-kinsmen. He did not qualify his words by directing us only to admonish the sins of those under 18.

Did Augustine resent Monica’s persistence? Judge for yourself:

“And when we were at the Tiberine Ostia my mother died. Much I omit, having much to hasten. Receive my confessions and thanksgivings, O my God, for innumerable things concerning which I am silent. But I will not omit anything that my soul has brought forth as to that Your handmaid who brought me forth—in her flesh, that I might be born to this temporal light, and in her heart, that I might be born to life eternal. I will speak not of her gifts, but Yours in her; for she neither made herself nor educated herself. You created her, nor did her father nor her mother know what a being was to proceed from them.” (Confessions IX, 8)

Our Lord has asked us to help one another on our spiritual journey, to assist in keeping each other on the straight and narrow, and to point out missteps for the sake of the sinner and the Body of Christ.

That includes our over-18-year-old children.

St. Monica knew that, and that’s why she did all in her power to help St. Augustine to turn away from sin and toward Christ. She didn’t leave him to himself once he turned 18; she realized her responsibility as his mother and fulfilled it.

Her son’s spiritual well-being was the only thing St. Monica lived for. On her  death bed, she told him,

“I do not know what there is left for me to do or why I am still here, all my hopes in this world being now fulfilled. All I wished for was that I might see you a Catholic and a child of Heaven. God granted me even more than this in making you despise earthly felicity and consecrate yourself to His service.”

I feel the same way as St. Monica toward my children. In that respect, we’re kindred spirits.

By the way, I wrote about this at length in my book, Strengthening Your Family: A Catholic Approach to Holiness at Home. I also frequently speak on this topic.

August 28, 2015 Let ISIS Force Our Faith In, Not Out
Recent Comments
0 | Leave a Comment
Browse Our Archives
Related posts from Catholic to the Core