Pope Francis to Schoenstatt Fathers: Contemplation, Service, Fraternity – a Lesson for Us, Too 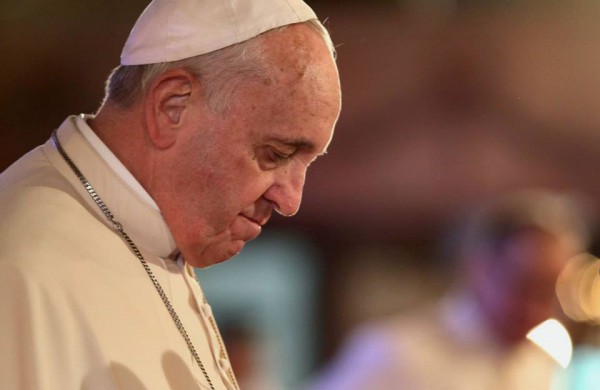 Today Pope Francis met with the participants of the General Chapter of the Schoenstatt Fathers, an event that occurs just once every twelve years. This year is the 50th Anniversary of the community’s founding.

The Secular Institute of the Schoenstatt Fathers was founded by Fr. Joseph Kentenich in 1965 with the mission to serve the Apostolic Movement of Schoenstatt.

The Schoenstatt Movement was founded in 1914 by Fr. Kentenich as a Catholic movement of moral and religious renewal. It’s based on a Covenant of Love with Mary and its center is the Marian Schoenstatt Shrine, of which there are more than 200 worldwide.

The Schoenstatt Fathers met privately with the Holy Father to present the chapter conclusions – including the installation of new international leadership – and to pledge their faithfulness to Pope Francis in the service of the Church.

Pope Francis encouraged the Fathers to keep alive Schoenstatt’s foundational charism and to transmit it to the younger generation. Charism only grows through contact with reality, he said, otherwise it becomes a museum piece.

The Holy Father also encouraged the Schoenstatt Fathers to truly live the two pillars of an authentic spiritual life expressed by Fr. Kentenich:

“…with the ear on God’s heart and the hand on the pulse of time.”

Those two pillars aren’t only for Schoenstatt Fathers; they’re for all of us who want to live an authentic spiritual life.

Then Pope Francis gave one of the most beautiful descriptions of the priesthood that I have ever heard:

In the reading of the Divine Office today, Saint Gregory the Great speaks to us of the priest who is a watchman on the heights in the midst of the people so that he can see from a distance what approaches (cf. Homily in Ezekiel,Book 1, 11, 4). Thus is the priest. I am referring to the priest who is awake, because the one asleep, no matter how high up he is, sees nothing. So is the priest. As the rest of his brothers, he is also in the plain of his weakness, of his little strength. However, the Lord calls him so that he will arise, so that he will go up to the watchtower of prayer, to the height of God. He calls him to enter into dialogue with him: a dialogue of love, of a father with a son, of a brother with a brother, a dialogue in which is heard the beating of God’s heart and one learns to see further, more profoundly.

I think we all can learn from Pope Francis’ description of the importance of prayer:

The Lord awaits us in prayer — please, do not leave it –, in contemplation of His Word, in the praying of the Liturgy of the Hours. It is not good to neglect prayer or, worst still, to abandon it with the excuse of an absorbing ministry, because “if the Lord does not build the house, in vain do its builders labor” (Psalm 127:1) It would be a grave error to think that the charism is kept alive by concentrating on external structures, on schemes, on methods, on the form. God keep us from the spirit of functionalism! The vitality of the charism is rooted in the “first love” (cf. Revelation 2:4). Of Jeremiah’s second chapter: “I remember the years of your youth, when you followed me happy through the desert,” – the first love, to return to the first love. That first love renewed day by day, in the willingness to listen and to respond with enamoured generosity, in contemplation, opening ourselves to the novelty of the Spirit, to surprises, as you said. We let the Lord surprise us and open paths of grace in our life, and that healthy and necessary decentralization happens, in which we put ourselves aside, so that Christ can occupy the center of our life. Please, be de-centralized; never be at the center.

I don’t even want to count the number of times I’ve either shortened or put aside entirely my prayer time because I had too much to do.

Pope Francis also spoke to the Fathers on the nitty-grittiness of community life. But his words rang home for me, not just in terms of the community in which I live (family, apostolate, etc.), but in the greater community of the world.

When we meet with our brothers, especially with those who in our eyes or in the eyes of the world are less agreeable, what do we see? Do we realize that God loves them, who have the same flesh that Christ assumed or do we remain indifferent to their problems? What is the Lord asking of us in that situation? To take the pulse of reality requires contemplation, a familiar relation with God, constant prayer, so often boring but which ends in service. In prayer we learn not to look away from Christ who suffers in his brothers. In prayer we learn to serve.

The Holy Father warned the Schoenstatt Fathers to avoid the “ladder of promotion” and instead to seek genuine fraternity, calling it “the great school of discipleship.

I know folks who are not priests and need to heed that warning – myself included!

Please, may there never be indifference in your communities. Conduct yourselves as men; if disputes or differences of opinion arise, do not worry, the heat of discussion is better than the coldness of indifference, real sepulcher of fraternal charity. In the end, everything is surmounted with love, understanding, dialogue, sincere affection, prayer and penance, and fraternity take on new strength, new impetus, filling your priesthood with joy. Learn to endure one another, to quarrel and forgive each other. Above all, learn to love one another.

I first was attracted to this news item because of my affiliation with the Schoenstatt Movement.

But, as I read through it, it became more and more apparent to me that, while the Holy Father was addressing the Schoenstatt Fathers, his advice is vital for all of us.

September 12, 2015 Why Venerate Mary's Name?
Recent Comments
0 | Leave a Comment
Browse Our Archives
Related posts from Catholic to the Core