The same Left that is outraged by Trump encourages a culture of sexual immorality October 12, 2016 Mark Meckler

Amid the outrage brought on by Donald Trump’s sexually explicit remarks caught on tape back in 2005, the Left has quickly forgotten the sexually charged culture it has embraced, encouraged and continues to forge.

Encapsulating this stunning display of hypocrisy is author and Thomas W. Smith Fellow, Heather Mac Donald, who wrote a piece called “Trumped-Up Outrage” over at City Journal. From her perspective, liberals have responded as if this is the most shocking thing ever said about women while acting like they are innocent of ever saying questionable things in a private space.

But what about what is said in the public sphere? Remember, actual supporters, even friends, of the Clintons and the Obamas have said similar things to millions with their blessing. Take for instance Beyoncé, whose lyrics speak of her own sexual prowess and her choreographed moves emphasize it. Is it any better that Beyoncé’s fans, many young females, are exposed to hearing things like, “When he f*** me good I take his a** to Red Lobster?” To date, there has been no outrage from the Left over this. Mac Donald adds that in the video for that song, Formation, a very young girl appears twerking and yet, “No objections to that destruction of the innocence of childhood from the DNC.”

Mac Donald writes how Mrs. Clinton found Trump’s words “horrific” but has stayed silent on the lyrical content of Beyoncé’s music or her husband Jay-Z:

President Obama has singled out Beyoncé for praise, and the singer is a big Hillary Clinton supporter, to not a word of protest from Clinton regarding her status as a role model for young girls. Bill Clinton met with Beyoncé and her husband, rapper Jay Z, in September. If Bill or Hillary thinks the lyrics of Jay Z’s “Big Pimpin‘” “horrific,” in Hillary’s words, they are not letting on.

Needless to say, “Big Pimpin’” speaks of nothing wholesome.

Clinton has supporters in Hollywood who have never shied away from exploiting sexual vulgarity to boost their own careers. Amy Schumer, for instance, has said, “I have used sex as a marketing tool and it has worked. I mean, my TV show is called Inside Amy Schumer.” Then there’s Lena Dunham, who not only regularly appeared naked on her HBO show Girls, but also wrote about fondling her sister’s genitals for fun when they were kids in her book. Dunham enjoys being an official mouthpiece for the Clinton campaign without ever once being called out on her past indiscretions.

Mac Donald then tears apart the hypocrisy among feminist thought:

The sudden onset of Victorian vapors among the liberal intelligentsia and political class at the revelation of Trump’s locker-room talk is part and parcel of the Left’s hypocrisy when it comes to feminism and sexual liberation. A routine objection to Trump is that he makes, in the words of the New York Times, “gutter attacks on women.” But why should women be exempt from Trump’s gutter attacks on anyone he wants to humiliate? Trump’s gratuitous nastiness to men and women alike, kicking  people when they are down, unfits him to serve as the premier civic role model for the nation’s children. But the feminists can’t have it both ways: declaring that women should be equal to men in all things and then still demand a chivalric deference to female’s delicate sensibilities. Either women are the same as men or they’re not. It is particularly galling to see the selective resurrection of Victorian values from the same crowd that has been pushing transgender locker rooms on the world, in an effort to destroy the last shred of girls’ innate sexual modesty.

A great moment in the second debate was when Trump hammered Clinton on her husband’s past sexual sins of which she had no defense. Mac Donald writes:

Trump said in his defense that Bill Clinton “has said far worse to me on the golf course.” That may be the most credible thing that Trump has ever uttered… though there is a huge difference between the reality TV star Trump bragging about his libido on a studio bus and Bill Clinton exploiting the power of the presidency to seduce a young intern. But Democrats are the most shameless in their outrage over the Trump braggadocio, having dismissed Bill Clinton’s White House and gubernatorial escapades for years, and standing as the party of maximal sexual liberation, unlike the Republicans. The New York Times rejects the relevance of Clinton’s predatory White House behavior on the ground that “Mr. Clinton is not running for president.” But the Times did not find Clinton’s behavior significant when Clinton was in office, either.

Democrats feel a moral superiority to everyone else. When it’s politically convenient, they will call out immorality. Otherwise, they celebrate it as liberation. 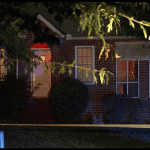 October 12, 2016
Georgia Homeowner Shows Why We Have the 2nd Amendment
Next Post 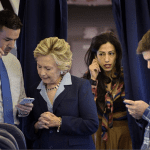 October 14, 2016 The Clinton Campaign's Secret Propaganda Machine: the Mainstream Media
Recent Comments
287 Comments | Leave a Comment
Browse Our Archives
get the latest from
Politics Red
Sign up for our newsletter
POPULAR AT PATHEOS Politics Red
1