New Atheists Need to Get Their Narrative Straight

If you are going to proclaim yourself the hardened, tough adults who stand for Humanity Come of Age as you glory over theists, the weaklings on crutches whose beliefs originate in the “bawling and fearful infancy of our species”, then for heaven’s sake (get it?) man up and stop sniveling, you wusses!

Mature adults don’t sue because they had to turn off the television to avoid the topic of religion or news announcements about a Day of Prayer. They don’t offer girly sobs about how they had to alter their conversation to avoid the topic of religion. Metallic men of the future who look into the abyss and laugh don’t get a tremble in their voices about how they feel like “outsiders” when mean theists at the Cool Kids table talk about prayer.

Dearest atheists, consider taking some free advice from somebody who bats for the opposite team. You know who you guys could take a cue from? Christian martyrs. Roast ’em, mash ’em, stick ’em in a stew, they take a licking and keep on ticking. Gouge out their eyes and they laugh and turn it into a fun feast day. (Happy Feast Day to my grand-daughter, the Cuteness). Barbecue them and they say, “You can turn me over. I’m done on this side.” Heck, Perpetua was so badass that she actually helped the unnerved executioner in the arena by holding the tip of the sword to her throat so his trembling hands could deal the coup de grace. So New Atheists: Next time, pay attention to all those Christians you butcher by the millions and see if you can pick up some tips about how to cowboy up and deal with a little suffering. Those were men and women who could take it. Atheists who screech like little girls at the sight of a world not to their liking are not going to be very effective Vanguards for the Revolution because, you know, sheesh! What a bunch of sorry pantywaists!

My advice: learn to cope with the fact that, with the exception of brief moments in history when people with major personality disorders who lack normal social and affective abilities take over and impose their will with blood and iron on a prostrate populace, atheists will always comprise a small minority, and even 21%of them are so confused about what “atheism” means they declare that they believe in God. So yeah, there’s a reason you feel like an outsider: you are. As a Catholic who is also an outsider in American culture, my suggestion is: have fun with it. One of the pleasures of outsideriness is that you get to be a subversive weirdo who is as exotic as a Hottentot. You can actually make friends who are fascinated by your counter-cultural lifestyle–that is, unless you are a sullen grouch who files suit and mutters about everybody around you praying. Then, you can just expect to be the unhappy isolated person you will inevitably be.

It needn’t be that way. There are alternatives such as the happy, engaged-with-life, intellectually curious (and, I expect, not going to be an atheist forever) Leah Libresco, who does not get the vapors when confronted by the fact that most people are theists. Instead, she cheerfully conducts open-minded, open-hearted conversations with them in a spirit of bonhomie. Try to be like that. To be sure, there is always the risk that when you stop sealing yourself in an airless vault of resentment and wimpy self-pity you might actually find yourself liking and agreeing with theists and questioning your own fragile ideology. But if Leah can man up and do it, so can you.

December 14, 2011 You Are Not to Know...
Recent Comments
92 Comments | Leave a Comment
Browse Our Archives
Follow Us!

Do Catholic Feminists Wish to Smash...
suspended in her jar
Related posts from Catholic and Enjoying It!

Catholic
Yes, You Can Eat Halal Cooking
Catholic and Enjoying It!

Catholic
The illusion of the conservative white American Christian...
Catholic and Enjoying It!

Catholic
Pseudo-Profundity from Fake Voltaire
Catholic and Enjoying It!

Catholic
In Honor of Presidents Day...
Catholic and Enjoying It!
TRENDING AT PATHEOS Catholic

Bible on "One, Holy, Catholic, and Apostolic" Church
From my book, Revelation! 1001 Bible Answers to Theological Topics (Oct. 2013; also available... 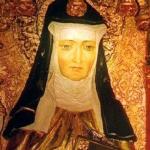 Deaconesses: Examination of Biblical & Patristic Data
Pope Francis has agreed to set up a commission to study the...
view all Catholic blogs
What Are Your Thoughts?leave a comment
Copyright 2008-2020, Patheos. All rights reserved.