There is a story told about St. Lawrence:

At the beginning of August 258, the emperor Valerian issued an edict that all bishops, priests, and deacons should immediately be put to death. Sixtus was captured on 6 August 258, at the cemetery of St. Callixtus while celebrating the liturgy and executed forthwith.
After the death of Sixtus, the prefect of Rome demanded that St Lawrence turn over the riches of the Church. St. Ambrose is the earliest source for the tale that St Lawrence asked for three days to gather together the wealth. He worked swiftly to distribute as much Church property to the poor as possible, so as to prevent its being seized by the prefect. On the third day, at the head of a small delegation, he presented himself to the prefect, and when ordered to give up the treasures of the Church he presented the poor, the crippled, the blind and the suffering, and said these were the true treasures of the Church. One account records him declaring to the prefect, “The Church is truly rich, far richer than your emperor.” This act of defiance led directly to his martyrdom

This is the Holy Spirit: the Spirit of the Catholic Faith. And here is another example:

The Holy See press office has confirmed the news of the burial of a homeless man in the Teutonic College cemetery within Vatican City State. Willy was a homeless man of Flemish origin.  His exact age was unknown but he was believed to have been around 80 years of age. He died on  December 12 last year and was buried in the Teutonic Cemetery on January 9 this year.

Willy was a familiar face to many in the area of the Vatican. He attended daily Mass in  Sant’Anna parish in the Vatican and spent his days and nights on the streets around St. Peter’s Square, Borgo Pio and Via di Porta Angelica. The pastor of Sant’Anna in the Vatican, Father Bruno Silvestrini, had dedicated the Nativity Scene at Christmas to Willy, adding a homeless man among the shepherds. He loved to pray, he had a good heart, attended the morning Mass at St. Anna every day and always sat in the same place. Read more at Vatican Radio

Willy stands in a long tradition of poor pilgrims who lived close to the heart of Jesus Christ.  Some of them, like St. Benedict Joseph Labre, are canonized.  But all of them–every last one–is, we are assured by Jesus Christ, Jesus himself.  Inasmuch as we do it to the least of these, we do it to him.

Pope Francis, knowing this, has honored this poor man in exactly the way biblical and Catholic tradition–and St. Lawrence–does.

So how do the Greatest Catholics of All Time at Pewsitter report this?  Abbey Roads has the story: 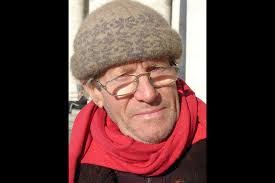 Memo to Dives, the editor of this deeply and sinfully unCatholic headline and to every consumer of Pewsitters’ insults to the pope and the poor who did not shower Pewsitter with rebukes for it.  In your malice against the Holy Father,  the successor of Peter, you have now insulted Jesus Christ in his precious poor one in the very hour of his death.  Mary Magdalene went out of her way to anoint the body of Christ.  You went out of your way to spit on it.  If you value your soul, meditate on this and repent before it is too late:

“There was a rich man, who was clothed in purple and fine linen and who feasted sumptuously every day. And at his gate lay a poor man named Lazarus, full of sores, who desired to be fed with what fell from the rich man’s table; moreover the dogs came and licked his sores. The poor man died and was carried by the angels to Abraham’s bosom. The rich man also died and was buried; and in Hades, being in torment, he lifted up his eyes, and saw Abraham far off and Lazarus in his bosom. And he called out, ‘Father Abraham, have mercy upon me, and send Lazarus to dip the end of his finger in water and cool my tongue; for I am in anguish in this flame.’ But Abraham said, ‘Son, remember that you in your lifetime received your good things, and Lazarus in like manner evil things; but now he is comforted here, and you are in anguish. And besides all this, between us and you a great chasm has been fixed, in order that those who would pass from here to you may not be able, and none may cross from there to us.’ And he said, ‘Then I beg you, father, to send him to my father’s house, for I have five brothers, so that he may warn them, lest they also come into this place of torment.’ But Abraham said, ‘They have Moses and the prophets; let them hear them.’ And he said, ‘No, father Abraham; but if some one goes to them from the dead, they will repent.’ He said to him, ‘If they do not hear Moses and the prophets, neither will they be convinced if some one should rise from the dead.’ ”(Lk 16:19–31).

March 2, 2015
Beautiful Music from Some Wonderful Nuns
Next Post

Catholic
On this Friday in Christmas...
Catholic and Enjoying It!

Catholic
Today's chance to do a work of mercy
Catholic and Enjoying It!
TRENDING AT PATHEOS Catholic