If you fit these two profiles

If you fit these two profiles November 11, 2017 Mark Shea

Then I submit that you have an absolute moral obligation to help defray the medical costs of every victim of a mass shooting:

And if you are even slightly inclined to give any credence whatsoever to the lies the Gun Cult tells in order to deflect blame for their idolatry to culture war enemies (such as the *lie* that the shooter in Sutherland was Antifa (a lie circulated by InfoWars and eagerly regurgitated by the Right Wing Lie Machine before the bodies were cool), or that the Vegas shooting was somehow “faked” and the victims were actors who deserve death threats, or that Sandy Hook was faked by evil parents who should be tormented and tortured in addition to enduring the death of their children, then you should have every last penny you have ever earned not only go to pay for the medical costs of victims, but anything left over go to pay for damages to the people you have victimized as an accessory to murder after the fact.  Then you should be thrown in jail.

It is, I think, a new phenomenon in American culture that there now exists a well-organized right wing lie machine that swings into action within seconds of any tragedy to a) shriek “don’t politicize tragedy!” at anybody who wants to prevent the next slaughter while simultaneously pumping out lies that the shooter was Antifa/Muslim/insert right wing culture war enemy here in the total absence of any facts.

On Monday, I was hearing from multiple Good White Christian gun zealots who were telling me that the shooter in Sutherland was “antifa” and “Muslim” and, when challenged to provide documentation, they simply replied “prove me wrong.”  This speaks to the intense need of the Gun Cult to pin their responsibility for putting the technology of slaughter in the hands of angry white males like themselves on everybody *but* themselves.  The perverse genius of the lie is that it reinforces the lie that they need the guns to protect themselves from the bogeyman of Antifa or Muslim terror when it is they themselves who are the threat.

And meanwhile, the White Supremacist in Chief refuses to address the fact that white terrorism is a much bigger domestic threat than brown terrorists.  But he is doing a crackerjack job of making sure shooting victims are crushed by medical debt.

This is a prolife issue. 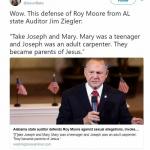 November 10, 2017
How Low Will the Party of Nihilist Misogynous White Spite Sink?
Next Post

November 13, 2017 Jesus is not ethnocentric...
Recent Comments
0 | Leave a Comment
"Late to the game, but while I agree with him that the end doesn’t justify ..."
Catherine Hobbs Building Bridges of Trust vs. Winning
"I also think netflix is more evil than good, the things they have and support ..."
Jackson A reader struggles with scruples about ..."
"I am pretty sure remote cooperation is evil unless with proportionate reasons..."
Jackson A reader struggles with scruples about ..."
"Just one nit - the Dickey Amendment (the bit of law that supposedly "forbids" the ..."
Jon Heresy of the Day: Antinomianism
Browse Our Archives
get the latest from
Catholic
Sign up for our newsletter
POPULAR AT PATHEOS Catholic
1