Prayer and Works of Mercy Requests

Stand with the poor families
With 32$ a month, you can bring a smile on the face of the child be blessed and make their lives change for better.

Who can realize, this little Marium is the one before with her grandmother before mercy for life came in to their lives
You can choose a child you support and change his or her life like Marium
May God bless all who stand to help the poor amen amen
http://paypal.me/mercyforlife

In addition, a reader writes:

I met Kerri Lewis 5 years ago as Joshua’s amazing occupational therapist and I had also met her husband at our parish. Their family has become such good friends to our family and Sarah has been their all-time favorite babysitter before going to college. This is the family that took us in when the tree hit our home 2 years ago. Kerri’s son, Blake has PANS (Pediatric Acute-Onset Neuropsychiatric Syndrome).  PANS is a misdirected immune reaction from exposure to infectious or environmental agents, where antibodies attack a portion of the brain causing inflammation. The brain inflammation then causes abrupt onset of neuropsychiatric symptoms, such as obsessive-compulsive disorder, tics, severe eating restriction, anxiety, ADHD-type behaviors, bowel/bladder changes, school regression, personality changes, emotional lability, and sleep disturbances. Most of the initial research and cases where documented on PANDAS (Pediatric Acute-Onset Neuropsychiatric Syndrome associated with Streptococcal Infections)  in the 1990s showing a link between strep infections and sudden onset of OCD. PANDAS is under the umbrella of PANS with PANS showing with same symptoms but triggered from other infections or environmental triggers.

What was so shocking about this is that Blake had not shown signs of being very sick the months leading up to this change! His symptoms started shortly after an oral surgery.  (This is from Kerri’s write up.)

Kerri has also been diagnosed with some health issues that she describes also in the write up: “I have had several symptoms on/off for the last 17 years however last February after a 2nd knee surgery (to repair a torn ACL), followed by an illness,  all of my symptoms seemed to come on at once. It was like a tornado of physical, neurological and mental symptoms taking over my body all at once! Blake’s diagnosis of Lyme Disease made me investigate further the possibility of this for myself. I was diagnosed with Lyme Disease last May (along with co-infections of Bartonella and Babesia),  an active Epstein Barr Virus (mono), an H Pylori infection and Small Intestinal Bacterial Overgrowth. I was suffering from extreme immune difficulties and adrenal fatigue. Most likely I have had Lyme for years but it remained “dormant” in my body until the stress of Blake’s illness and my immune system could no longer fight the battle. “

Kerri has had to cut back significantly on her work, as she describes, due to Blake’s illness as well as her own. Her hardworking husband, Jesse, who is in the service as a recruiter, faithfully provides to the best of his ability. Blake is prayed over and has been anointed on a regular basis and this family is a faithful Catholic witness, giving their expertise, time and energy to so many children with disabilities over the years.

I know how far and wide the Love of Christ is through the Body and would greatly appreciate it if you would post this appeal on your blog and ask your readers to donate what they can and most of all, to pray for healing for both Blake and his devoted mother, Kerri, as well as the rest of the family.

Thank you so much, dear brother!

Please help and pray!  Thanks so much! 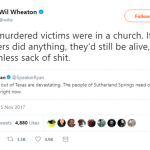 November 7, 2017
Wil Wheaton Lost His Temper and Apologized
Next Post 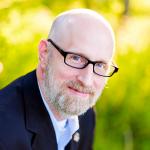 November 8, 2017 David French Brings a Voice of Decency to NRO
Recent Comments
0 | Leave a Comment
"Late to the game, but while I agree with him that the end doesn’t justify ..."
Catherine Hobbs Building Bridges of Trust vs. Winning
"I also think netflix is more evil than good, the things they have and support ..."
Jackson A reader struggles with scruples about ..."
"I am pretty sure remote cooperation is evil unless with proportionate reasons..."
Jackson A reader struggles with scruples about ..."
"Just one nit - the Dickey Amendment (the bit of law that supposedly "forbids" the ..."
Jon Heresy of the Day: Antinomianism
Browse Our Archives
get the latest from
Catholic
Sign up for our newsletter
POPULAR AT PATHEOS Catholic
1

Catholic
On this Friday in Christmas...
Catholic and Enjoying It!

Catholic
Today's chance to do a work of mercy
Catholic and Enjoying It!
TRENDING AT PATHEOS Catholic