Truly this is the End of Days! 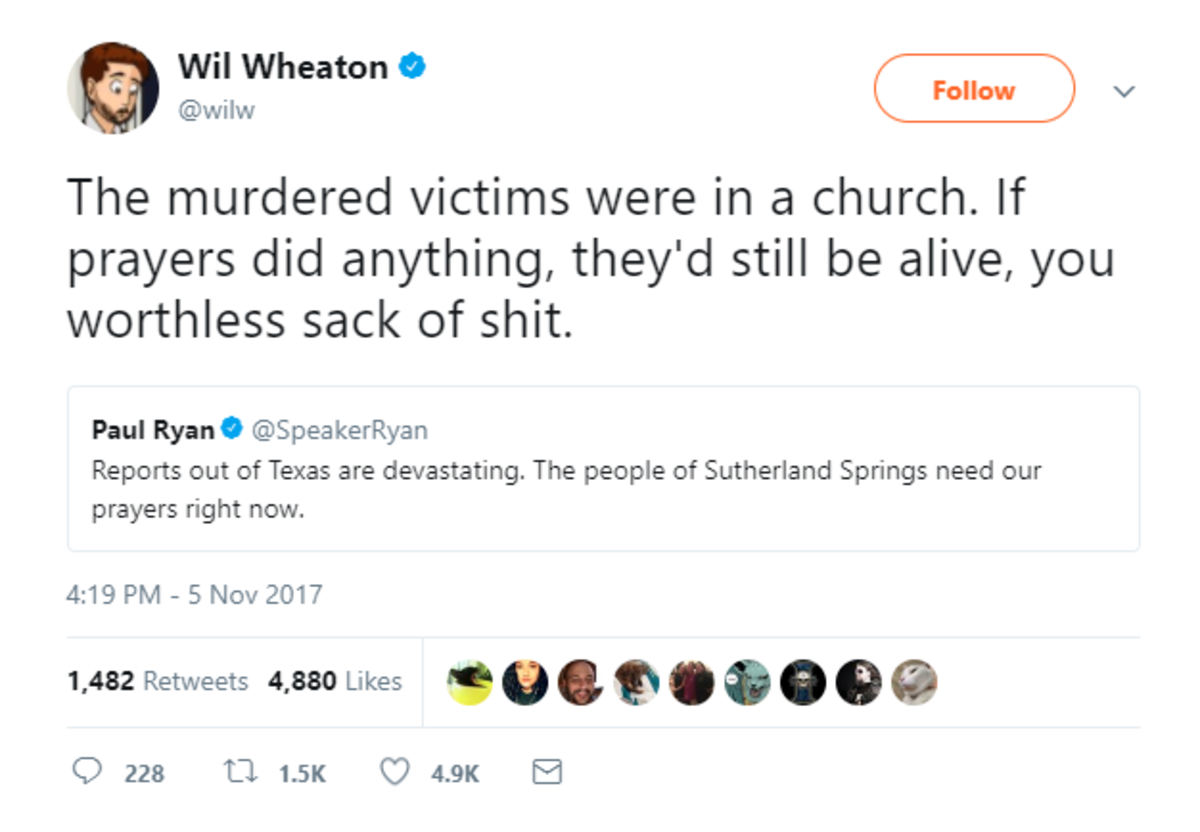 FOX News, of course, leapt on this and immediate started ginning the Persecuted American Christians narrative.

But the reality is that the worst thing Christians can do in this moment is complain that people rolling their eyes at “thoughts and prayers” after the latest massacre are somehow attacking or persecuting us. Even if it were true (which it largely is not) we should keep the focus on the people who need it: the victims and not turn this into an occasion of self-pity. It’s Not About Us.

Here’s reality: the fury about “thoughts and prayers” is fury at the use of gooey piety as a shield against *action*. When Wil Wheaton, an atheist, lets loose a blast at thoughts and prayers, he does so in response, not to all Christians, but to Paul Ryan, because Ryan *always* does the Thought and Prayer schtick in order to put a thick layer of gooey piety over his complete and utter whoredom to the NRA and his adamantine will to make make sure that absolutely nothing about our gun regime changes, up to and including even a CDC study of gun violence. In short, he calls Jesus “Lord, Lord” and refuses to do what he says in the fifth commandment. Rather than make even the slightest move toward sanity, he joins his party in refusing to so much as study the problem of gun violence. He is totally committed to making sure that 35,000 more human sacrifices are offered to the arms industry profits next year as they will be this year. If he has his way, he will continue to work tirelessly to makes sure that Vegas and Sandy Hook and Sutherland happen forever and ever and ever, not to mention the thousands of other deaths you will never hear about. His “thoughts and prayers” are lies and an insult to God Almighty.

That an atheist can see this is not an insult to our faith in the slightest. Indeed, it is a healthy sign that Wheaton agrees with Jesus Christ on the fifth commandment. That he lost his temper (and immediately apologized lest sincere people of faith feel targeted)

Because I want to be sure sincere people of Faith see this: I spoke in anger, and I apologize to you.
https://t.co/O4JW2yA531

is, I think, worthy of respect. That right wing culture warriors are treating his outburst as some sort of persecution against the Church and refusing to forgive it is both a refusal of Jesus’ command in the matter of forgiving 70X7 and yet another sign that the culture war perverts the gospel. It is Ryan’s phony “thoughts and feelings” refusal to act, not Wheaton’s demand that he do so that is the real insult to the gospel.

My attitude here is governed by the principle Jesus articulates in saying that those to whom much is given, much will be required. I don’t expect Wheaton, an atheist, to have any regard for prayer at all. That he dials back his anger and shows respect for believer is well done.

That so many Christians refuse to forgive him even when he apologizes is much more serious, because they are supposed to know better.

As to the theological content of his original tweet, his crack about prayer not preventing death is best heard as the cry of anger and anguish that it is, not battled as a false theological proposition. Coupled with conservative Catholic culture war BS, it results in a toxic brew like this stupendous piece of Sheldon Cooper levels of Apologetics Subculture jerkishness:

Those who persecute the church and those who mock Christians for trusting in Almighty God rather than Almighty Government may believe that the bloodshed in Texas proves the futility of prayer. But we believers see the shooting in Texas as proof of something far different—proof that Christ has counted us worthy to suffer dishonor for his name and proof that no amount of dishonor, persecution, or violence can stop him from answering our prayer to deliver us from evil.

Theological correctness coupled with inhuman, unfeeling, proud stupidity. All that comes out of that hideous piece is “Liberals are stoopid for grieving murder and love government, not God”. For which any unbeliever grieving the slaughter of children can be excused for responding, “Screw you and your sick religion.” That piece is the polar opposite of evangelism and one of the many reasons we are losing the next generation. It has all the marks of what Chesterton defines as madness: logical perfection and cramped, spiritual contraction.  It turns the glory of the martyrs into a FOX news editorial for the splendor unfettered gun slaughter.

So yeah, I cut the penitent atheist a lot more slack than I do the smug Christian apologist for the gun culture, particularly if that apologist adds refusal to forgive the penitent to his culture war campaign.  And above all, I cut no slack the pol who uses phony piety as a cover for his commitment to maintaining the rate of 35,000 gun slaughters a year as human sacrifices to the arms l0bby that he serves. 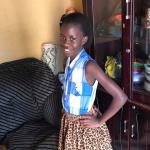 November 7, 2017 Prayer and Works of Mercy Requests
Recent Comments
0 | Leave a Comment
"Late to the game, but while I agree with him that the end doesn’t justify ..."
Catherine Hobbs Building Bridges of Trust vs. Winning
"I also think netflix is more evil than good, the things they have and support ..."
Jackson A reader struggles with scruples about ..."
"I am pretty sure remote cooperation is evil unless with proportionate reasons..."
Jackson A reader struggles with scruples about ..."
"Just one nit - the Dickey Amendment (the bit of law that supposedly "forbids" the ..."
Jon Heresy of the Day: Antinomianism
Browse Our Archives
get the latest from
Catholic
Sign up for our newsletter
POPULAR AT PATHEOS Catholic
1