The Parable of the Bridge

A couple of years ago, the I-5 bridge spanning the Skagit river collapsed. Suppose that, due to pressure groups working to limit the Department of Transportation’s power, the DOT was limited only to stretching a piece of tape across I-5 a hundred yards ahead of the bridge and handwriting on it: “BRIDGE OUT!”

Technically, they would have “done something” about the danger of the bridge, though not enough to stop hundreds of cars from hurtling into the Skagit River anyway.

Now suppose that, in a feat of daring, the state decides to pass another law mandating that, instead of a piece of tape stretched across the freeway, somebody has to run out there, dodging traffic and putting out sawhorses with handrwritten “BRIDGE OUT” signs taped to them.

The first three are struck and killed but a couple of sawhorses are put in the lanes for a minute, till they are run over and smashed by cars hurtling to their dooms.

At this point, the anti-DOT forces swing into action and declare that laws are futile and government is a waste of time. “Let’s enforce the laws we have, not pass more laws!” So 35,000 cars are allowed to plummet into the river each year as the “price of freedom”.

Perhaps you can see where I’m going with this.

The standard jaw of the Gun Cult since Sutherland is “The shooter had received a discharge from the Air Force that was supposed to bar him from getting a gun but he got one anyway because some clerk failed to file the right form. Let’s enforce the laws we have, not pass more laws!”

If the system you have is not doing the job, you make a better system. You don’t stick with the system you have that does not work. A system which comes down to one fallible clerk with a piece of paper standing between a maniac and the tools of mass slaughter is a crappy system: tape across the freeway. What there should be is multiple failsafes and redundancies making it well-nigh impossible for maniacs to so much as get within a mile of such technology. Which means, yes, more laws. 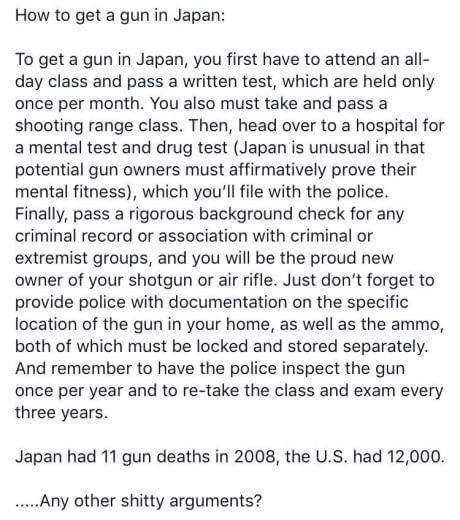 The core issue is that Americans are dominated by a well-funded subculture dedicated to the supremacy of arms profits over human life.  So the whole tilt and slant of the discussion is away from “How do we keep schoolrooms full of children from being slaughtered in cold blood” and toward “What is the absolute least we can do to think about change and the absolute most we can do to whip up fear of change?”  In that environment, even *studying* the problem is feared and hated.

And the backbone of that culture calls itself “prolife” while it battles to make sure that Sandy Hook and Vegas and Sutherland go on forever and ever and ever with slogans like “we have enough tape across the freeway laws”.

November 14, 2017
There could hardly be anything more deeply symbolic...
Next Post

November 15, 2017 That thing of when the Christian adulterous creeper
Recent Comments
0 | Leave a Comment
"Late to the game, but while I agree with him that the end doesn’t justify ..."
Catherine Hobbs Building Bridges of Trust vs. Winning
"I also think netflix is more evil than good, the things they have and support ..."
Jackson A reader struggles with scruples about ..."
"I am pretty sure remote cooperation is evil unless with proportionate reasons..."
Jackson A reader struggles with scruples about ..."
"Just one nit - the Dickey Amendment (the bit of law that supposedly "forbids" the ..."
Jon Heresy of the Day: Antinomianism
Browse Our Archives
get the latest from
Catholic
Sign up for our newsletter
POPULAR AT PATHEOS Catholic
1