A woman with a proclivity for calling brown people apes: 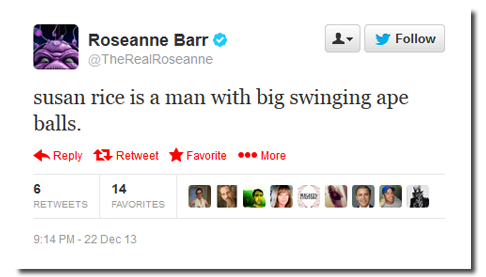 …got hired to do a reboot of her show by ABC last year.  Note the date on that tweet.  Everybody knew she was an unstable kook given to nutty bigotries and crazy conspiracy theories:

But, as the retweets make clear, she was a nut who who is popular with the conspiracy-monger in the White House and his dull son.  So ABC decided to reboot her show, knowing that she is an unstable kook.  One-third of the electorate is a lot of money.  So why not give her a forum and see if that demographic might not be milked?

She’s been tweeting nutty stuff through the run of the show.  But this weekend, the woman who thought this was funny decided to relieve herself of her racist nuttery yet another time with this observation:

For some reason that I do not understand, this tweet, out of all the crazy tweets she has posted, stuck out and a backlash occurred.  Realizing that this one was not going to go unnoticed, she pulled it down and apologized (a rarity for a Trump supporter and something for which I give her credit).  But the damage was done.  By mid-day yesterday, Wanda Sykes had resigned, then ABC cancelled the show, then her management dropped her like plutonium, then even her old show was cancelled in reruns.

The moral of the story is this:

And this brings us back to the real problem, which is the Orwellian, doublethink, magical, reality-denying mind of the Trumpkin, who proudly displays his love for racist kooks while pretending it does not exist:

ABC tried to make a quick buck off of exploiting this brood of vipers and got bitten in the process. One cheer for their “courage” in giving this racist kook the broom. But they still tried to suck up to and not confront this mob. They asked for it. Let’s hope they learn from this mistake and don’t try to repeat it in some other form. MAGA is nature’s way of saying “Don’t touch.”

May 29, 2018
Pete Vere on Phil Lawler's Ongoing War on the Holy Father
Next Post

May 31, 2018 Something to think about
Recent Comments
0 | Leave a Comment
"Late to the game, but while I agree with him that the end doesn’t justify ..."
Catherine Hobbs Building Bridges of Trust vs. Winning
"I also think netflix is more evil than good, the things they have and support ..."
Jackson A reader struggles with scruples about ..."
"I am pretty sure remote cooperation is evil unless with proportionate reasons..."
Jackson A reader struggles with scruples about ..."
"Just one nit - the Dickey Amendment (the bit of law that supposedly "forbids" the ..."
Jon Heresy of the Day: Antinomianism
Browse Our Archives
get the latest from
Catholic
Sign up for our newsletter
POPULAR AT PATHEOS Catholic
1