To recap: Last week we were supposed to accept the screams for resignation of the only pope to act against McCarrick because a guy with a known grudge said so, even though he refused to provide any evidence and changed his story multiple times and even though that man himself did nothing about McCarrick when he was the sole person on American soil who could have done so.

This week we are supposed to tell the lying slut Christine Blasey Ford to shut up about her sexual assault claims against Brett Kavanaugh she was willing to have verified by lie detector because the Sex Predator in Chief with a long history of calling women pigs and dogs says that the rich white guy who claims the President is above the law would never assault a woman.  We are to believe that a woman with 200 character witnesses who stands to gain nothing but a massive smear job from the GOP is lying while a man who stands to gain a Supreme Court seat and who has already lied under oath several times is telling the truth.  Why?  Because she is a woman and he is a rich white man.

In its zeal to apply the normal “nuts and sluts” approach to Christine Blasey Ford, the Right Wing Lie Machine immediately ginned up the mob–and sicced them on the wrong person in their zeal to ruin the woman:

But the stories identified the wrong Christine Ford. The real accuser is Christine Blasey Ford, who teaches psychology and statistics at Palo Alto University. The one the right-wing sites targeted was Christine Adams Ford, a professor of human services at California State University, Fullerton.

The incorrect articles went viral, prompting the web sites to pull them down and issue corrections. Those doing so included Gateway Pundit and Grabien, along with right-wing agitator Jack Posobiec.

Grabien, a news website, sent readers to student reviews of the wrong professor.

“Many interested in learning more about who Ford is have come across her students’ reviews on RateMyProfessors.com,” read the article, which had no author listed. “They’re… not good.”

Grabien issued a correction within hours, but the story had already gone viral, receiving a link on The Drudge Report’s homepage. “CHRISTINE FORD’S STUDENTS RAVAGE HER IN REVIEWS,” the link read.

Fox News host Laura Ingraham also shared the Grabien post to her Facebook followers and later deleted it. Posobiec, one of the initial pushers of the Pizzagate hoax, linked directly to the wrong RateMyProfessors.com page from his Twitter account on Sunday night.

When that first lie went down in flames it simply ginned up a new one: the claim that Kavanaugh’s mother ruled against the parents of Christine Blasey Ford, Kavanaugh’s accuser.  This too is a filthy lie:

However, by December of that year the Blaseys were able to refinance the mortgage, and in January 1997 UMLIC filed a motion to dismiss their earlier petition. Judge Martha Kavanaugh granted that motion on 4 February 1997, thus formally bringing an end to the foreclosure proceedings against the Blaseys.

The claim that Kavanaugh “ruled against” Ralph and Paul Blasey, central to the conspiracy theory about their daughter’s sexual assault allegations made 21 years later, is therefore false.

The couple kept their house, ownership of which they transferred into a Blasey family trust in June 2014. This fact also undermines the putative logic of the claim that Christine Blasey Ford was motivated by vengeance against Martha Kavanaugh: not only did Judge Kavanaugh not “rule against” the Blaseys in 1996, but the outcome of the case in question was favorable to the family, who ended up keeping the house.

Not only does the “foreclosure” claim constitute a failed, factually baseless attempt to impugn the motives of Christine Blasey Ford in giving up her anonymity to make sexual assault allegations against a would-be Supreme Court justice, but it offers a prime example of a common feature of many conspiracy theories: mistaking coincidental and tangential encounters for meaningful and substantial conflicts and connections.

That’s because the Party of Trump has goals, not principles. And the people most eager to lie and lie and lie in pursuit of those goals are the “prolife” Christianist enemies of God who will spread this crap as far and wide as they can. Because power, not Christ the Truth, is their god.

Victims only matter to that crowd if they are useful.  When they get in the way, that mob, so recently full of fake dudgeon at Francis, behave exactly like the Catholic bishops described in the Pennsylvania AG report.

Indeed, the fascinating thing is the hypocrisy of the people who have been going on endlessly about the “Lavender Mafia”.  When sexual abuse involves men or boys, the level of hysteria is considerably higher than when it’s a girl or woman who is the victim.

Here, for instance, is a guy who spends his time selectively attacking the Catholic communion and ignoring the grave problems in his own, suddenly full of compassion, not for the victim of sexual assault with a credible case but for Brett Kavanaugh (who is, via the wealth and power machine installed to make him a SCOTUS judge calling her a liar and giving full cooperation and support to the Smear Machine): 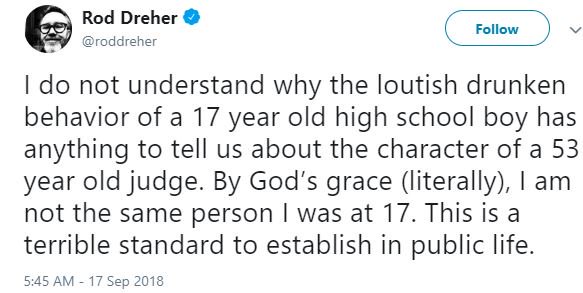 But, of course, the issue is the lies being told to shame, humiliate, and degrade a victim of sexual assault right now.   That is happening, not to a 17 year old horndog, but courtesy of a 53 year old rich white guy in full possession of his faculties.

Simcha Fisher writes about the incredible “Vile liberal Puritans!  Who among us has not attempted to rape a 15 year old girl when we were young?” argument that was the instant go-to defense by Kavanaugh’s male supporters–to the astonishment and horror of women:

Dear men: When you defend attempted rape as normal hetero teenage hijinks, I assume it’s because you yourself have attempted to rape someone, and there is nothing that will put that thought out of my head.

We can no longer pretend that it’s only the deviant left or the hypocritical right who harbor sex predators. It’s everywhere. It’s everyone. And that makes it harder to cling to the old binary political fairytales of good us vs. evil them.

One thing hasn’t changed, though. When a woman comes forward and says she’s been assaulted, we can still come together as a country and tell her it’s all her fault.

And that’s the reason the whole “Lavender Mafia” analysis of the Church’s woes is a dead end.  It’s everywhere and it is being illustrated right now by the Righteous who imagine that the abuse problem is caused by All the Gays and All the Liberals while they go to the mat to destroy a woman who comes forward at nothing but immense cost to herself to say that a rich, white heterosexual male assaulted her.  Sure she has 200 character witnesses. Sure, the 65 “Kavanaugh is definitely not a sexual assailant or anything” witnesses that he just happened to have at the ready (like you do when you are certainly not anticipating a sexual assault charge) have been remarkably hard to locate.  She’s still obviously part of a plot to make the Good Guy look bad.

It’s exactly how every enabling bishop saw every victim.

Until the victims are treated with respect and their voices are allowed to be heard with out further abuse, we can basically divide people into two camps: those who listen to victims and those who regard them as useful or as enemies.

The issue is not All the Gays and All the Liberals and them only.  It is abusers, gay and straight, and those who enable them.  As the attackers of Ford are making abundantly clear, that ain’t just bishops.  This does not, of course, let enabling bishops off the hook.  Rather, it illustrates yet again that bishops–up till the reforms in the mid-00s–behaved like every other institution.  And that the Party of Trump still does.

And so do the people who, just last week, were painting themselves as the Saviors of the Church from the Pope.  Because the overlap between them and the Party of Trump is massive.

If you are arguing this is all a conspiracy against Kavanaugh (as they used to argue that Maciel’s and Corapi’s accusers were all part of a conspiracy), here is a reader’s response to all that rubbish:

“This is entirely plausible and you are amazingly insightful to have figured this out.

Six years ago, a professional woman with a PhD and a career falsely claimed to her husband and her therapist that Brett Kavanaugh drunkenly groped her in high school. She pushed him off and ran. Nothing else happened.

She brought this up in therapy because she had been recruited by Hillary Clinton.

Because Hillary Clinton knew that someday, out of the hundreds of highly qualified judges in the country, Brett Kavanaugh would someday be nominated to the Supreme Court, and Hillary Clinton also knew that someday a Republican would be president after a relative moderate left the court and offered that Republican a chance to appoint a conservative justice. And that Republican would pick Brett Kavanaugh.

Hillary Clinton can see that far into the future.

And, furthermore, Clinton coached her sleeper cell terrorist to report, not that Kavanaugh raped her, or even touched her naked breasts. Rather, Clinton coached her sleeper cell saboteur — sabotrix? — to make a rather minor claim — that Kavanaugh merely groped her and was unable to so much as remove an inch of her clothing before she was able to throw him off of her.

Not sure why the sleeper cell sabotrix came up with that plot, but you are sure that this is all part of a diabolical plot.

You have also discovered that Dianne Feinstein held on to the letter accusing Kavanaugh NOT because the letter’s author did not want to be exposed, because she knew that what is happening now would happen. That she would be set upon by crazy haters and misogynists and called a liar, a whore, and a sabotrix.

No. That’s not why Feinstein held on to the letter. To protect the author’s anonymity, BECAUSE THAT’S WHAT THE AUTHOR REQUESTED.

And it was only when it appeared clear that Kavanaugh was, yes, going to be on the SCOTUS that the accuser decided, for the good of the country, to sacrifice her anonymity and go public.

No, you see right through that, you do.

WIMMIN, DEMS and OTHER ENEMIES OF MAGA!!!!!

Thank heaven for clear thinking patriots like you, is all I can say.”

Catholic
The Feast of the Holy Child Martyrs of...
Catholic and Enjoying It!

Catholic
Advice to Dems: Fight Smarter
Catholic and Enjoying It!

Catholic
Tia Marshall is a brave and good woman...
Catholic and Enjoying It!

Catholic
A reader offers a summary of Kavanaugh's lies
Catholic and Enjoying It!
TRENDING AT PATHEOS Catholic