The Feast of the Holy Child Martyrs of Covington

The highly selective Concern of the MAGA cult is disgusting and laughable.  They have ginned themselves into a royal Panic du Jour.  The Prez has reliably done his bit to shout “Fake News“. And the MAGA Media are reliably doing their bit to Horst Wessellize the kids into mascots for white supremacy:

“Stand your Ground” is white supremacist code for “Black kids in hoodies should be murdered, but rude white kids in MAGA hats are heroes of the white race against the brown invaders.”

Was the initial misreading  of “Aggressive MAGA kids bully old Native guy” wrong?  Yes.  And the media immediately did what they always do when they make a mistake: they retracted and apologized.  So did I for the matter of that.  It’s what you do when you are wrong.

But here’s the thing: This stopped being about the kids on Monday.  Now, as the Locked and Loaded language of that “Stand Your Ground” meme makes clear, this is about the total exoneration of the entire white racist MAGA cult, using those kids as human shields.

You see, another unnoticed phenomenon here is that the MAGA Cult and MAGA media, being nihilist predators with no shame have, in fact, exploited the mainstream media’s civilized capacity for shame. The MSM got a story wrong and feel bad about it and are trying to atone by providing balance. All the major media have published hand-wringing, soul-searching articles poring over how they got it wrong and gthe dangers of rash judgment and so forth.  The supposedly “smug” liberal media that always allegedly knows they are right and never allegedly listen to anybody outside their effete liberal bubble have spent the last week in minute self-examination and self-flagellation.  That’s why the Today Show has Nick Sandmann on (but not Nathan Phillips).  That’s why two Covington kids are allowed on the air to tell us, with straight faces, that blackface is a sign of Covington “school spirit” but nobody is allowed on to say, “That is exactly the problem.”

The thing is, I don’t remember the MAGA media ever apologizing to David Hogg for the massive torrent of lies (eagerly passed along by the Christianist cult online) charging him with being a “crisis actor” and smearing him with a host of ugly claims that he was part of an FBI conspiracy to make the Gun Cult look bad, or was some fake from out of state or all the other lies they told about him.

That kid, and the others from Parkland were not a group of Young Brett Kavanaugh dudebros who were rude to an old man for a bit and got caught on camera.  They were not part of an irksome group of teens wearing MAGA hats and acting douchey, as they shouted things like “It’s not rape if you enjoy it!”

No.  Hogg and the Parkland kids were young people who endured watching friends, family, and teachers be slaughtered, some of them before their very eyes.  And for that sin, the MAGA media poured out a torrent of lies about them and passionately urged the Cult to make examples of them.  And the Cult, looking to their Dear Leader responded: 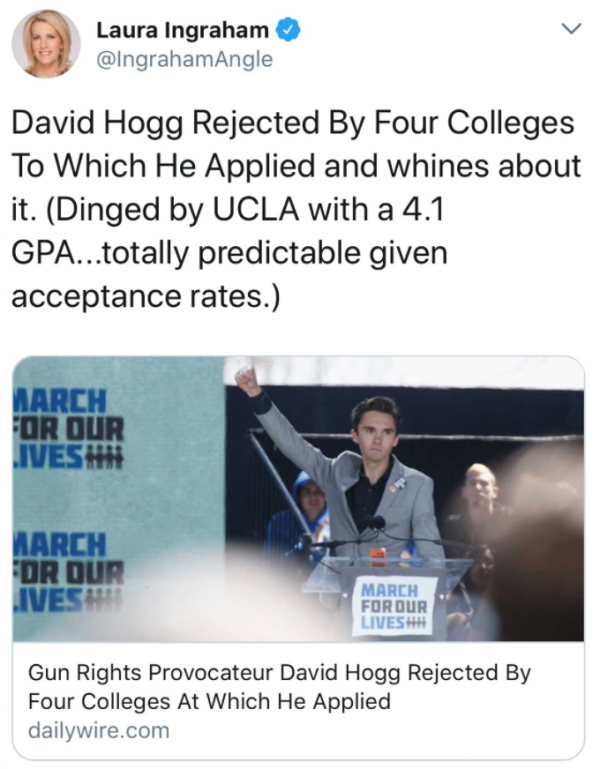 As a result, they have been threatened, mocked, lied about, and treated with contempt for a solid year by the same Cult that is now clutching its pearls over the Ruined Lives of the Holy Child Martyrs of Covington. (You know, the kids whose rich parents have hired a PR firm run by a buddy of Mitch McConnell.) Indeed, I remember being flayed, on a priest’s page, no less, for daring to suggest that Hogg was not a crisis actor in the pay of George Soros. No apologies were ever received from that mob either.

Nor have we heard any other apologies from the Right Wing Panic Machine for its absymal targeting of those kids.  No apologies from the Cult for insulting his looks, or judging his soul, or making fun of his grades or spending a year attacking him and his fellow victims of a GUN SLAUGHTER. Not one word of apology from that evil, lying Cult. They made his life and the lives of other victims hell and have never ever ever done what the alleged “FAKE NEWS” did this weekend: immediately retract and correct.

God’s name is blasphemed among the Gentiles because of you, Mr. Herreid.

When real media make mistakes they correct and retract, as they immediately did when more information became available. When MAGA media pour out lies to defame the innocent, they just press on, never admitting they are liars. And, by the way, never granting forgiveness to the media who retract and correct.

Why?  Because they have goals, not principles. And like the liar they serve, they do nothing but lie.  The Feast of the Holy Child Martyrs of Covington is nothing other than the Horst Wessellization of some rude kids in order to legitimize all the lies and brutalities and racism of the entire MAGA Cult.  I see you, MAGA media, and I’m not buying it.

And, by the way, neither is the next target of a MAGA Panic du Jour and smear campaign, Bp. John Stowe.

January 25, 2019 Feast of the Conversion of St. Paul
Recent Comments
0 | Leave a Comment
Browse Our Archives
Related posts from Catholic and Enjoying It!