The “Abortion is Our Number One Priority” Shell Game

Mark….the Catholic Bishops have declared that abortion for us voters is the “most important issue” for citizens to consider while casting a vote. Pope Francis has agreed with statement. END OF DEBATE…Vote as you wish Mark but on our faith will follow Holy Father and US Bishops guidance….CASE CLOSED….Next Thank You for playing.

I agree that abortion is the most important issue.

Now here’s the thing: There are two parties. One is the party that established our abortion regime (with Roe) and entrenched it (with Casey).

One party has refunded Planned Parenthood for 40 years and consistently refused to undo the abortion regime it created and entrenched.

One party has taught the “prolife” movement to, like you, pit the unborn against every other form of human life it wants to rob, harm, bomb, poison, torture, sexually assault, and murder.

One party that has re-funded PP at least ten times since Trump took office.

One party has raised PP funding 8% last year and will give them $550 million more this year, because their number one priority is not abortion, but building Trump’s Wall.

The other party is the Democrats.

Think about that last point concerning the Wall, because it lays waste the ridiculous fiction that dominates the MAGA Christian claim that abortion is their #1 priority and that they are “just listening to the bishops”.

During Pres. Trump’s first year in office, when the GOP controlled both chambers of Congress, the White House, and had a favorable Supreme Court, what was accomplished in terms of federal legislation on abortion? A third trimester ban? Mandatory ultrasounds? Waiting periods? Defunding of Planned Parenthood?

Answer is: none of the above.

In 2019, under President Trump, Planned Parenthood received its highest ever level of government funding and performed a record number of abortions.

And don’t forget the Cult Leader is giving PP $550 million more this year. Why? you may ask.

Gather round, children, and I will tell you how the MAGA “prolife” cult actually functions.

That is the standard shell game every time a MAGA Christian lies that he is “prioritizing” abortion.  The trick that is played is that the unborn are not prioritized, the defense of whatever evil Trump is up to today is prioritized and the unborn are brandished as human shields for that evil.  This is achieved by pitting the unborn against the human beings the MAGA cult wants to rob, harm, kidnap, sexually assault, unjustly punish, bomb, poison, or kill instead of relating them to these people.

So, for instance,  to be a “prolife” MAGA Catholic and support the death penalty you must embrace three positions.

Or you could just try listening to and obeying the Magisterium and then take all the time you waste making war on the Magisterium of the Church in order to kill innocent people so that you can kill people who do not need to be killed and spend it on defending the unborn you claim are your Number One priority.

Similarly, when Trump deports a mother and her two sick kids back to Honduras, what the MAGA cultist spends his real time and energy on is defending that act of sadism, not the unborn.

When Trump is impeached, the MAGA cultist wastes his time shrieking that Jesus Christ is being impeached, not defending the unborn.

When the Cult needs to defend Trump’s sadism to a mother and her newborn baby, then that, not the unborn is Priority #1:

When Trump destroys 50 years of clean water protections with the stroke of a pen, defending that, not the unborn, is the #1 priority of the MAGA cult.

And on and on.  The MAGA cult is not about the sanctity of human life.  It is about the power and glory of Donald Trump and his GOP Crime Syndicate. And it is not, by the way, about fidelity to the Magisterium or the Holy Father either: 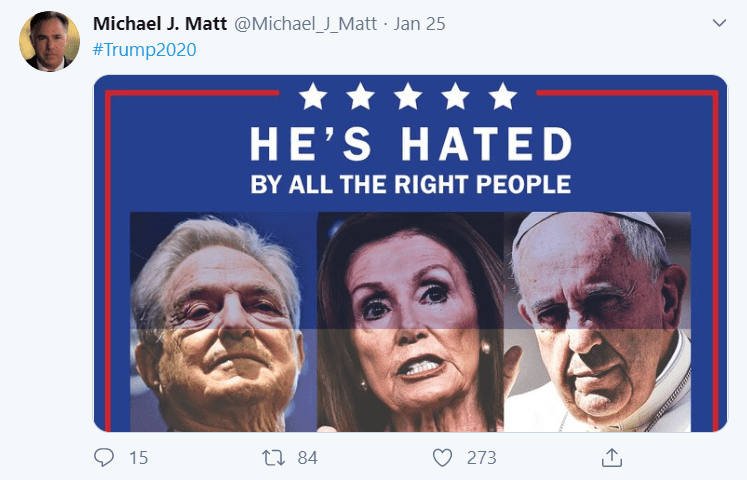 Here’s what the MAGA cult has actually done: it has accepted the Nine Rings of Power from Trump thinking that it can now finally defeat abortion.  Instead, it has become a slave to his will.  They will give him everything.  He will take everything from them.

There are still people who believe that human life is sacred from conception to natural death. But they are not among the slaves who support Trump.

To get a man’s soul and give him nothing in return–that is what truly gladdens the heart of Our Father Below. – Uncle Screwtape

February 6, 2020 The Massive Failure of the "Prolife" MAGA Cult
Recent Comments
0 | Leave a Comment
Browse Our Archives
Related posts from Catholic and Enjoying It!

Catholic
If You are Not Against Trump, You are...
Catholic and Enjoying It!

Catholic
One small counter-argument against the torrent of Trump...
Catholic and Enjoying It!
TRENDING AT PATHEOS Catholic