Here’s a taste of a piece I wrote on Pope Paul VI, who will be canonized a saint tomorrow, along with Oscar Romero, the great Salvadoran martyr (to American brutalist policy in Central America, but that’s another story):

On October 14, 2018, Pope Francis will canonize Pope Paul VI, along with martyred Salvadoran Archbishop Oscar Romero. Pope Paul VI, despite his enormous impact on the Church—the most obvious being the reform of the liturgy brought about by the Second Vatican Council—is curiously obscure to many Americans. He is perhaps best known for his 1968 encyclical “Humanae Vitae” (“Of Human Life”), which upheld the Church’s controversial ban on the use of artificial birth control.

Paul VI has the disadvantage of being sandwiched between two far more charismatic personalities: Pope John XXIII and Pope John Paul II (elected after Pope John Paul I’s month long reign). His was often the unglamorous work of a bureaucrat, not of a beloved papa figure like John or a superstar evangelist like John Paul II. But as the man charged with implementing an enormously controversial council and shepherding the Church in its transition to facing the modern world as a renewed evangelistic force, he faced titanic challenges with intelligence, resolve, and deep holiness.

Giovanni Battista Enrico Antonio Maria Montini was born on September 26, 1897, the last pope born in the 19th century. He was ordained in 1920, became a bishop in 1954, and was named a cardinal in 1958. He was a cleric groomed for the papacy by his work in the Vatican, serving in the Secretariat of State (1922–54) and witnessing the torments of what was arguably the most violent century in history.

At the pope’s request, from 1939 to 1947, Montini created an office that worked to find over 11 million displaced persons and provide refugees with shelter, food, and other material assistance. In addition, he helped escaped Allied POWs, Jews, anti-Fascists, Socialists, Communists, and others. It gave him a unique perspective and skill set for the work to which God would call him when Pope John XXIII died in the summer of 1963, having convened the Second Vatican Council in October 1962.

John XXIII initially hoped the council would be able to finish its work by December 1962, after a single two-month session. Montini, with a more realistic grasp of the immense challenges facing the Church, remarked of his friend wryly, “This old boy does not know what a hornets’ nest he is stirring up.”

As pope, Paul VI accomplished so much that it is difficult to summarize in a mere 2,500 words. His biographer, Peter Hebblethwaite, gives a reasonable assessment of his crowded papal career (stretching from June 1963 to August 1978) with these words:

“He managed to complete the council without dividing the Church. He reformed the Roman Curia without alienating it. He introduced collegiality without ever letting it undermine his papal office. He practiced ecumenism without impairing Catholic identity. He had an Ostpolitik [way of negotiating with Communists] that involved neither surrender nor bouncing aggressivity. He was ‘open to the world’ without ever being its dupe. He pulled off the most difficult trick of all: combining openness with fidelity.”

Pope Paul’s most obvious achievement was, of course, to shepherd the Church through the Second Vatican Council (1962–65), the largest rethink of its tradition since the Council of Trent, 400 years earlier. He understood, better than most, that the paradigms that had governed the Church’s engagement with the world since the 16th century were no longer sufficient. This did not mean that the Gospel was inadequate, of course. But it did mean that the Church needed to return to the sources of its tradition—particularly the Scriptures and the Fathers of the Church—and approach the world with a view not of defending a fortress under assault, but of proclaiming good news as the early Church had done.

Paul VI understood that the Church needed to proclaim the faith with a unified voice, an irony given the hostility the council would meet. The priorities he laid out for the council were a better understanding of the Church, Church reforms, advancing the unity of Christianity, and dialogue with the world. He requested the council fathers to avoid new dogmatic definitions and to restate the faith in simple language. For Catholics born before 1960, perhaps the most notable change was in the liturgy. Priests faced the congregation instead of the altar and spoke in the vernacular instead of Latin, and laypeople were encouraged to take a more active role in worship.

Pope Paul VI was also notably solicitous of the goodwill of the representatives of other Christian traditions at the council, sought their forgiveness for the sins of Catholics that had contributed to the disunity of Christendom, and took particular care to remind the council that many bishops could not attend because they lived under Communist rule. He understood that Christians now stood together in a world that both desperately needed the Gospel and presented the Church with a host of threats that it could not afford to meet with internecine squabbles.

Pope Paul VI sought to affirm whatever could be affirmed in common with those from other faith traditions. “Unitatis Redintegratio” (“Decree on Ecumenism”) and “Nostra Aetate” (“Declaration on the Relationship of the Church to Non-Christian Religions”) are the two great models for this approach. Compare them with the documents of the Council of Trent, and the immense shift in tone is plain. Trent reveals the mind of an embattled Church, struggling to condemn one false proposition after another in the heat of combat with the Reformation.

At Vatican II, under Paul VI’s guidance, the Church emphatically shifts to a glass-half-full approach to other Christian traditions and to religious traditions beyond the Christian sphere. Again and again, the Church, while not papering over the real differences between the Catholic communion and other traditions, focuses on what can be affirmed in common.

As a result, Pope Paul made unprecedented strides in healing some of the Church’s ancient and open wounds. For instance, his meeting with Ecumenical Patriarch Athenagoras I in Jerusalem led to rescinding the excommunications of the Great Schism of 1054. Similarly, after nearly 2,000 years of what had amounted to monologue (and countless shameful persecutions by Christians culminating in the horrors of the Shoah) he inaugurated respectful interreligious dialogue with various representatives of the Jewish people, as well as conversations with other religious traditions, both Christian and non-Christian. 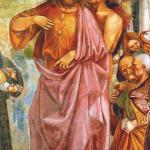 October 12, 2018
I keep getting asked what I mean by "Christianism"
Next Post

October 15, 2018 Francis-Hatred and the Drip, Drip, Drip of Girardian Scapegoating
Recent Comments
0 | Leave a Comment
Browse Our Archives
Related posts from Catholic and Enjoying It!

Catholic
The Saint Monica Club
Catholic and Enjoying It!

Catholic
On the Canonization of Anna Kolaserova and the...
Catholic and Enjoying It!

Catholic
St. Dorothy Day, Now More Than Ever
Catholic and Enjoying It!