I keep getting asked what I mean by “Christianism”

I keep getting asked what I mean by “Christianism” October 12, 2018 Mark Shea 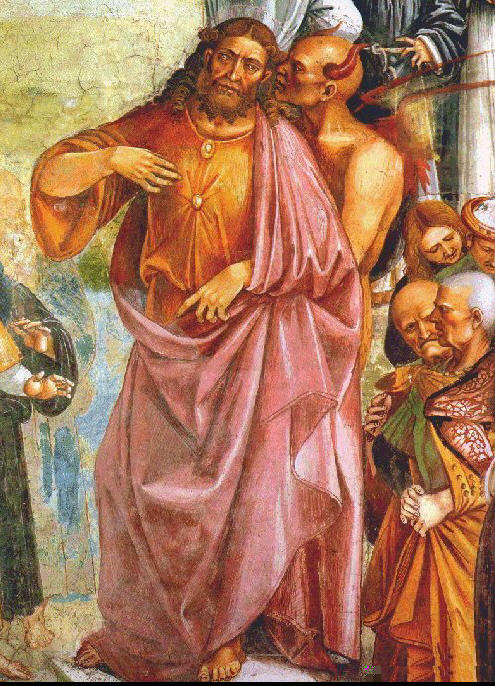 Signorelli: Antichrist and the Devil

A Christianist is an adherent of a political cultus centered on Donald Trump and informed by a magisterium of FOX, right wing talk radio and right wing social media, which uses Christian imagery and jargon in the service of a diabolical antichrist gospel of racism, war, torture apologetics, gun fanaticism, misogyny, mammon worship, cruelty to the least of these and hatred of both science and orthodox Christian belief. One of its defining features is a soteriology which states that “Talking about opposing abortion taketh away the sins of the world–including the sin of supporting abortion if you are a Republican.” Accordingly, it is a fertility cult which uses the unborn as human shields in order to make open war on the actual teaching of the gospel which calls for the protection of all human life from conception to natural death.

A Christian, in contrast, is a disciple of Jesus Christ.  A Christian attempts to obey Jesus Christ at all costs.  As a Catholic, I believe the fullness of Christ’s gospel subsists in the Catholic Church and that, therefore, discipleship to Jesus means heeding and obeying all the Church’s magisterial guidance, not just the bits I happen to like.

Christians believe Jesus died for sinners and we are to do likewise. Christianists believe in killing those whom they feel threatened by, using their precious, precious gun.

Jesus said “Suffer the children to come unto me.” Christianists believe in torturing and caging children at the border.

Christians practice baptism and believe Jesus give it as a gift to cleanse us from sin. Christianists say, “Waterboarding is how we baptize terrorists.”

Christians believe Jesus gave us his body, blood, soul, and divinity to eat to make us sharers in eternal life. Christianists believe God gave them the poor to eat, body and soul, to make them sharers in the American Dream.

Christians believe Jesus said “Love your enemies.” Christianists say, with their lord and savior Donald Trump, “If somebody hits you, hit them back ten times as hard.”

Christians are the mortal enemies of Christianism because Christianism is an antichrist false gospel, created in hell to deceive the faithful.

It cannot be said often enough that just as truth is at the heart of the worship of Jesus–the Way, the Truth, and the Life–so lies are at the very heart of “prolife” Christianism, which imitates its lord and savior Donald Trump in pouring out a torrent of lies.

Lies are the mainspring that drive it. Lies are the core of the Christianist’s hope. The deepest, most heartfelt lie of its soteriology is that opposition to abortion taketh away all the sins it passionately loves. And the corellative hope it has founded all its ideology upon is that every Supreme Court justice it has lied, cheated, and stolen to support is a massive liar when he says that Roe is settled law and that he will uphold it. That’s the hope: that Roberts, Gorsuch and Kavanaugh are liars who have successfully deluded enough people, snuck on to the Court by lying about their support for Roe, and who will now use their gift of lying to overturn Roe.

It’s possible that will happen. It’s possible that the Christianist hope in their lies will result in Roe being overturned. But what never seems to occur to the Christianist lover of lies is that, as in 1992, when they placed exactly the same hope in exactly the same lies, they will be betrayed by the liars in whom they place their trust and get another Casey decision. My money is on that happening as it did then–and with the same result: that they learn nothing from it.

For what is so amazing is the blinding power of their towering pride. It does not and, indeed, cannot occur to them that they have been wrong to trust the Party that is 100% responsible for the establishment (in Roe) and expansion (in Casey) of our abortion regime. It is is unimaginable to them that while they offer hosannas to Trump and his party of nihilist predators as the “most prolife President in history” even as they re-fund Planned Parenthood eight times, they are being laughed at by that party as the suckers they are. Because that would involve the unthinkable possibility that they–the Greatest Christians of All Time, anointed by God Almighty to sit in judgment of all others, including the Holy Father himself–are wrong and that there might be another approach to our abortion regime than theirs.

Christians uphold the whole teaching of the Church because they are disciples of Jesus Christ himself, not of bits and pieces of what he said that they can use to accessorize their lust for earthly power.

Christianists are mortal enemies of the whole teaching of the Church and do everything in their power to make war on every bit of it that is a threat to their worship of Trump and his party and their obedience to the daily downloads and panics du jour that are the stuff of the Right Wing Noise Machine.

Does the pope say something about care for the environment? We will denounce him as a commie tree hugger and say “How can he talk about climate change when babies are dying?” (Because the unborn are the opposite of the biblical command to care for the Garden.)

Does the Church teach about just war? We will denounce the Church as a liberal UN-loving NGO and say, “How can they talk about the prudential judgment of war when babies are dying and that is intrinsically immoral?” (Because the unborn are the opposite of the dead innocents killed in war.)

Does the Church teach about a living wage and say that families should have enough to be able to afford the babies “prolife” Christianists claim to care about? We will denounce the Church as a bunch of socialists who do not understand economics and say, “How can they talk about the minimum wage when babies are dying?” (Because the unborn are the opposite of the ability of families to afford them.)

Does the Church teach about gun violence? We will denounce the Church as a liberal pack of gun grabbers and say, “How can they talk about guns when babies are dying?” (Because the unborn are the opposite of the 35,000 dead from guns each year.)

Does the Church teach about capital punishment and call for its abolition? We will denounce the Church as heretical for this obvious and logical development of doctrine and say, “How can they deny us our pound of flesh at the cost of four innocents out of 100 when babies are dying?” (Because the unborn are the opposite of the dead innocents killed by capital punishment and because being “prolife” means asking “How many people do we get to kill?” not “How can we keep from killing people if at all possible?”)

Does the Church teach about justice to the alien, the orphan, and the widow and condemn the caging of children at the border and xenophobia to desperate refugees? We will denounce the Church as ivory tower fools trying to kill us all at the hands of murderous Mexicans and say, “How can they talk about the border when babies are dying?” (Because the unborn are the opposite of the children caged, tortured, and sexually assaulted at the border.)

Does the Church teach that the Shepherd leaves the ninety and nine to go rescue the one lost lamb and say there is more rejoicing in heaven over one sinner who repents than over 99 who do not need to repent?  Christianists like Austin Ruse (who defended the invitation extended to actual Austrian Nazis for the inauguration of Donald Trump) are exquisitely happy when people are driven from the Church by scandal.  Don’t misunderstand his point.  He only begins by commending them for their honesty.  But what he means by that is not “They are honest about the pain of scandal they could not endure.”  No.  What he means is “I thank you, O Lord, that I am not like these worthless hellbound scum, who finally admitted that they have no faith.  Good riddance.  I am a Real Catholic[TM] and these faithless ones can rot in hell outside the Church.  I’m glad they are gone.  I hope they burn as the apostates they are.”  And then he urges others he deems impure to likewise cut themselves off from the Church and the grace of the sacraments.  In short, he wants, insofar as it lies within his power, to urge people to go to hell.  Because the #1 goal of Christianism is the prevention of those outside the Church from entering and the expulsion of as many of those inside as possible.

Christianism, in short, seeks the first for the least of these and the second death for all.  It is a lie from hell.

Because Christianists are People of the Lie, enemies of the gospel, and enemies of Christ.

October 13, 2018 Pope St. Paul VI: Bridge Builder
Recent Comments
0 | Leave a Comment
"A colossal lie. When those cities had GOP mayors, were conditions better?The poor inner city ..."
Michel An African Cardinal Pushes Back Against ..."
"It's interesting, liberal cities are cesspools of poverty, crime, racism, and murder....all because of liberal ..."
Maggie Sullivan An African Cardinal Pushes Back Against ..."
"Pro-lifers exhibit the ultimate hypocrisy, claiming to care for human life, but supporting rightwing politicians ..."
Michel An African Cardinal Pushes Back Against ..."
"It seems Patheos prohibits authors who leave Patheos to write farewell posts pointing the readers ..."
Hernán J. González Memorial Day
Browse Our Archives
get the latest from
Catholic
Sign up for our newsletter
POPULAR AT PATHEOS Catholic
1

More Important than Belief in the...
Messy Inspirations
Related posts from Catholic and Enjoying It!