Thanksgiving and the Puritan Paradox

This week’s piece for the Catholic Weekly, in honor of Thanksgiving:

On November 22, we Yanks will be celebrating Thanksgiving. It’s not quite an exclusively American feast. Our Canadian neighbours celebrate it too, but in October, which I think is more sensible since eating turkey twice in one month (November 22 and December 25) is a bit much.

The Anglican Church of their day was, they thought, impure because it still preserved a lot of Catholic piety and beliefs that they wanted to purge. They were second generation fanatics bent on Doing It Right and showing Mom and Dad what Real Christianity [TM] is.

They disliked the Romish ways of their Anglican fathers and their compatriots in England would, about 30 years after the landing at Plymouth Rock, cut off the head of King Charles for failing to be as intolerant as they wanted him to be.

One hilarious consequence of this is seen in King’s Chapel in Boston. Built by the prosperous local burghers in the 17th century as a Calvinist shrine, it contains not the slightest trace of imagery depicting Jesus, Mary, or the saints.

But the local merchants who paid for the joint were not going to be denied their shot at advertising to the worshippers. So King’s Chapel is stuffed to the rafters with statues and busts—aka “graven images”—of rich men.

The Puritans also hated Romish feasts and holy days. Some of the more fanatical ones even wanted to rename the days of the week ‘First Day’, ‘Second Day’ etc. since they felt it was a sin to name pagan gods.

This killjoy spirit had trouble taking root in America beyond New England because the Puritans never managed to dominate the other colonies. We Yanks started as a mongrel breed of various Europeans and the fun of certain Christian holidays won out over Puritan buzzkill in the end.

One of the curious paradoxes of this is that the legendary feast the Puritans themselves celebrated to thank God for surviving their first winter took hold as a piece of the American mythos. 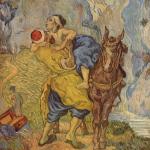 November 20, 2018
The Curious Reality of Christian and Diabolical Ecumenism
Next Post

November 22, 2018 Some Psalms of Thanksgiving, In Honor of the Day
Recent Comments
0 | Leave a Comment
"A colossal lie. When those cities had GOP mayors, were conditions better?The poor inner city ..."
Michel An African Cardinal Pushes Back Against ..."
"It's interesting, liberal cities are cesspools of poverty, crime, racism, and murder....all because of liberal ..."
Maggie Sullivan An African Cardinal Pushes Back Against ..."
"Pro-lifers exhibit the ultimate hypocrisy, claiming to care for human life, but supporting rightwing politicians ..."
Michel An African Cardinal Pushes Back Against ..."
"It seems Patheos prohibits authors who leave Patheos to write farewell posts pointing the readers ..."
Hernán J. González Memorial Day
Browse Our Archives
get the latest from
Catholic
Sign up for our newsletter
POPULAR AT PATHEOS Catholic
1

Damien of Molokai, Patron Saint of...
Femina Ferox
Related posts from Catholic and Enjoying It!