Deacon Steven Greydanus notes a new bit of argument in the scientific community:

A pro-choice doctor and a pro-life doctor have jointly authored a paper for a leading bioethics journal challenging the claim (which they say was never really a consensus) that fetal pain is impossible before 24 weeks.

Among other things, they argue that the experience of pain is distinct from a fully conscious self-awareness of being in pain, and the idea that pain depends on the cerebral cortex may be a fallacy.

I’ve always thought pro-choice arguments were weak and woolly.  From the silliness of saying that you aren’t human till you breathe to debates about “when ensoulment happens” the side defending abortion seems to always go for the mystic woo woo while any Christian  or Jew who opposes abortion can gladly affirm my favorite Atheists for Life poster:

“For the Embryology Textbook tells me so.”

That’s not a salmon, spotted owl, or octopus fetus.  That’s a human fetus.  Get real.

Likewise, I find the whole pain debate to be repulsive with the pro-choice side crowd taking the position of the date rapist who argues, “How can I have violated her so-called ‘dignity’?  She couldn’t feel a thing after all the drugs I fed her!”  In the end, it doesn’t matter what a human being can feel while you harm them.  It matters that a human being has a dignity intrinsic to them as a human being and you cannot violate that whether they can feel and understand it or not.

And if they can, in fact, feel it, as the argument above suggests, the pro-choice argument is not just indistinguishable from the date rapist’s justification, but is actively arguing that we should just shut our eyes and fire into the bush and cross our fingers that there is not a hunter in there.

So I cannot and never have been able to shake the conviction that abortion remains what it has always been: an abominable crime.

More than that, I regard it as but one more manifestation of something weird and violent in the fallen human race–the insistence on shifting violence down the ladder to somebody who cannot defend themselves rather than change ourselves or challenge the power up the ladder.

In the US in 1973 (and 2020, for that matter), we had barely begun crawling out of the pit of shame we dug for ourselves in our shifting violence down to black people (and don’t get me started on Native Americans, who we screwed over just as hard).  LBJ sagely characterized 400 years of American history like the savvy politician he was when he said:

If you can convince the lowest white man he’s better than the best colored man, he won’t notice you’re picking his pocket. Hell, give him somebody to look down on, and he’ll empty his pockets for you.

That was precisely the strategy the rich and powerful used to set poor whites against even poorer blacks for centuries in the US and it worked extremely well.

Likewise this is the same strategy of shifting violence to the weak: 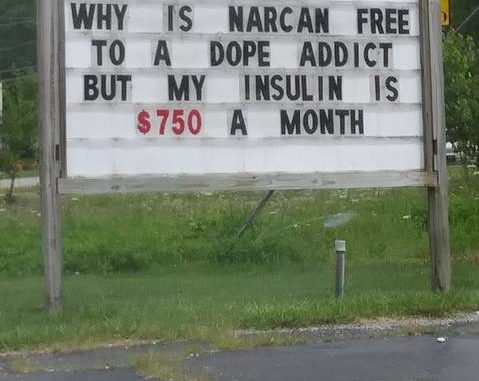 What this sign should say is “Why is my insulin $750 dollars a month?”

But we have been taught to shift our violence to the person weaker than we are rather than challenge those who are actually stealing from us and hurting us. So we punish the addict, not the people who are actually exploiting diabetics.

Abortion in the US is, in huge percentages, just one more manifestation of that same pattern. SCOTUS decided that, instead of addressing the pathologies that create the demand for abortion as we shift our violence down to women, we would just shift the burden further down–on to the unborn instead.

Despite their lies to the contrary, that sea change was achieved by the GOP via their SCOTUS appointees.  All the Dem appointees could have been in the loo and the verdict on Roe would have been identical. It was written by a Nixon appointee.

More than this, the dreamt-of GOP supermajority that will someday overturn Roe?  That happened in 1992 with an 8-1 GOP court and a prolife Dem as the sole member of the other team.  It gave us Casey, which entrenched abortion.  The GOP has lied that it will magic abortion away for 40 years, all while turning the “prolife” movement into the most ideological slaves of Trumpism in the US. And Trumpism is 100% about the rich and powerful telling the people they exploit that the real threats are the people weaker than themselves: desperate refugees and poor people.

So now we live in a regime that cynically uses prolife rhetoric, not to save unborn lives, but to brainwash a demographic that used to be prolife into being fanatically supportive of every GOP initiative to rob, harm, neglect, torment, and kill whatever victim group the Cult of Trump designates as the enemy. The MAGA “prolife” movement are the docile cheerleaders of Yemeni genocide, murdering journalists, kidnapping children, sadistic deportation policies, taking food out of the mouths of hungry kids, sexual assault of refugees by ICE (and by Trump), murdering refugees by thirst, and any other lie, crime, or evil Trump commits. Like a zombie, the MAGA “prolifer” chants “But abortion” as their justification for it all, brandishing their Precious Feet pin as their talisman that taketh away all their sins which now are the real focus of their time and energy. Spitefully making lib snowflakes cry, not saving the unborn, is now the real purpose of the MAGA “prolifer”.

Being prolife, according the Church, means respecting the dignity of human life from conception to natural death, because the life of the unborn is related to every other human life on the planet.

Being prolife, for the MAGA cult, now means pitting the unborn against every human life the Dear Leader and his GOP Crime syndicate want to grab by the pussy, declare to be animals, designate as scum, subject to “second amendment solutions”, decree to be unworthy of health care, beat up and haul out of a Trump rally on a stretcher, despise as “shithole countries”, declare to be sons of bitches for peacefully protesting cops who feed homeless people sandwiches full of feces (and get their jobs back), kill on death row, and (of course) do this:

In the effort to defend all that while joining in the lie that the guy who has re-funded Planned Parenthood at least ten times since he took office (the last time raising their funding 8% and refunding it this year to the tune of $550 million), the MAGA “prolife” movement has utterly sold its soul in the worship of this dimestore antichrist. And they back not only his vile misogyny, but his policies that punish poor women and ramp up the pressure on them to abort. Because they don’t care about the unborn. They care about punishing the weak rather than changing themselves or challenging the strong. All he had to do today to buy their silence was show up at a prolife rally and ramble on about himself and the totally overlooked the fact that he is getting ready to kick old people off Medicare. Say! Anybody remember all that stuff about “death panels” that the Cult where accusation is always confession used to talk about?

So I am observing today as a Day of Mourning for a “Prolife” Movement that has been radically co-opted and perverted. I pray for it to return to its original mission and repent its radical prostitution by finally remembering the authentic meaning of “prolife”: respect for the dignity of the life of every human being from conception to natural death.

Be more prolife, not less!

January 22, 2020
I love it when Catholics Nerd Out
Next Post

Catholic
In Honor of Presidents Day...
Catholic and Enjoying It!
TRENDING AT PATHEOS Catholic