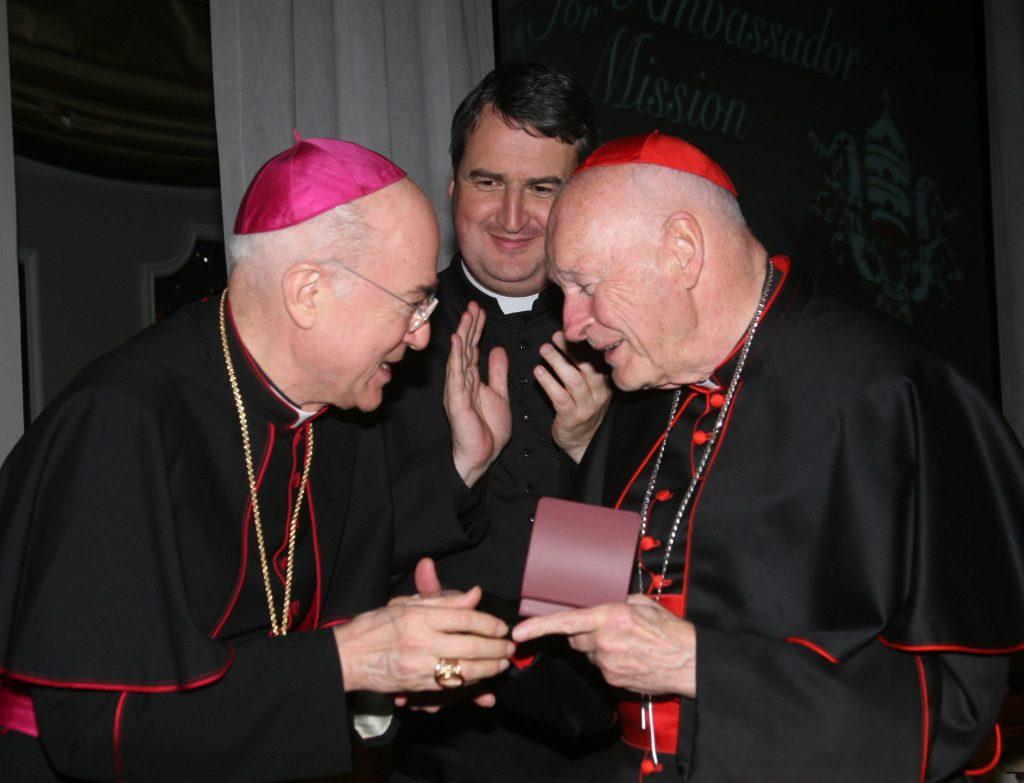 Look at the picture. It says it all. Vigano (on the left) was the one man on US soil from 2011-2016 who could have done something about McCarrick (on the right). By his own confession, Vigano knew about McCarrick’s crimes. But, as you see here, he wined and dined and feted McCarrick with papal medallions. They were ever so chummy.  Then, this past summer, when McCarrick’s crimes became public, Vigano realized the jig was up and people would demand to know why he did nothing.

Solution: invent the lie that he had placed McCarrick under Double Secret Probation and then scream at the top of his lungs that Francis–the one guy who had actually done something about McCarrick–was the guilty party who lifted those imaginary sanctions and should RESIGN!!!!”

It was easy.  He, of course, did not not go to real media because they would have asked for evidence before publishing his phony “testimony”.  Indeed, when the Washington Post asked for such evidence, Vigano’s response was to say that now was the time for “prayer and silence” before disappearing into hiding.  So Vigano turned exclusively to hack right wing Catholic sites to break his phony story.  And since he had in EWTN, Raymond Arroyo, the National Catholic Register, 1 Peter 5, Lifesite News and various other passionate members of the Francis-hating Right Wing Media a willing group of accomplices who have hungered for years to destroy Francis and achieve a palace coup, he knew he could count on them to marshal all their resources in a shock and awe campaign to destroy Francis and, most importantly, distract from his own failure to do a thing about McCarrick.

The problem was, his lies quickly fell apart and he fled from view, refusing to provide any evidence for his lies. All that was left was the stench of the feces he had flung and a base of suckers and accomplices who did their best to smear it on and thickly as they could.  That same base of suckers and accomplices now believe they are anointed by God to likewise heap all blame for the scandal on gays and libs while excusing themselves, like Vigano, for their utter failure to confront straight priests and their conservative enablers, like Vigano.

So now Vigano is back, making an ostentatious display of public piety for the delectation of that same base. “Repent! For the sake of your soul!” he dramatically says to McCarrick, the very man he failed to call to repentance when he had the power to do something about him.

This is all–100%–CYA from Vigano. He is a master of pointing fingers to keep people from ever asking “Where were you from 2011-2016? Why did you do nothing when you yourself admit you knew?”

It is only natural that conservative Catholic culture warriors at war with the Francis since the day he was elected would fasten on this visible-from-space fraud as their hero.  They have been so wrong about so much so many times for so long, why should they not be epically wrong here too?

January 16, 2019
Repeating myself for the umpteenth time since I still seem to be a mystery to many readers
Next Post

Catholic
A reader sent along this prescription for the...
Catholic and Enjoying It!
TRENDING AT PATHEOS Catholic