Repeating myself for the umpteenth time since I still seem to be a mystery to many readers January 16, 2019 Mark Shea

There is no prolife party. There is the party that is 100% responsible for the creation (via Roe) and entrenchment (via Casey) of our abortion regime and then there are the Democrats. Roe and Casey are GOP creations. Totally. And in addition, the GOP has authored and passed 8 spending bills since Trump was inaugurated, all of which funded Planned Parenthood. Did they shut down the government rather than fund PP?  Of course not.  And did the prolife movement expect them to or complain when they did not?  Of course not.  The prolife movement doesn’t care about that.  The prolife movement is too busy cheering for shutting down the government so that Trump can have an idiotic wall.  And the prolife movement’s Great White Sex Predator Hope, Kavanaugh?  He just sided with Planned Parenthood as well and turned away a chance to re-examine Roe.

Here is reality: The GOP and the Dems both support Roe and will never ever ever ever dismantle our abortion regime. Why would they? They both profit from it, both personally and politically. The GOP leadership, with Trump in the lead, have benefitted from multiple abortions for their wives and mistresses. But above all, they benefit from it by manipulating their base. Dems gin up their base with the fear that abortion will be outlawed. The GOP gins up their base with the lie that any day now, they will outlaw it. This kabuki has played out for 38 years.  But the truth is that only 20% of Americans want it outlawed, just as only 20% want abortion on demand without apology. 60% of Americans dislike abortion and would prefer not to think about it while that same 60% have absolutely no intention of outlawing it or telling desperate women in a crisis pregnancy what they can and cannot do. Result: at any time you can argue that 80% of Americans disapprove of abortion and 80% of American don’t want it outlawed.

And so it won’t be. Because the GOP is cunning and not stupid and knows that “prolife” Christianists are easy to manipulate and will eagerly lie even to themselves. Are there really prolife Christians? Of course. But the overwhelming majority are not prolife.  They are anti-abortion and, above all, pro-Republican.  What matters to them is the success of the GOP.  The unborn long ago became human shields for that overriding goal.

How did that happen? Millions of prolife Christians have bought–hook, line, and sinker–the lie that the GOP is “prolife” and that the sole approach to abortion is “Vote GOP or the baby gets it”. And once that bait is taken, the GOP knows that nearly all prolifers can be and are easily manipulated into supporting everything the GOP demands while they dangle the prolife carrot and never deliver. They give you participation trophies like the Mexico City Policy and then do nothing. Meanwhile, they buy from Christians their very souls and turn them into passionate apologists for unjust war, torture, the death penalty, tearing children from their parents and caging them at the border, Nazi marches, poisoning the planet, screwing workers out of a just wage, Trump’s criminal treasons, and anything else they want. Indeed, most of the energy of the Christian “prolife” Trump zealot winds up being funnelled, not to the unborn, but to daily defenses of whatever the Cult of Trump is doing today.

Meanwhile, what is totally overlooked in the monomaniac devotion to “getting prolife justices” is two things. First, you had your GOP supermajority on the Court in 1992 when it was 8-1, with a prolife Democrat. That Court gave you the Casey decision. Yet the “prolifers” learned nothing from that betrayal, nor from any other betrayal by the GOP, because they are so full of pride that it is inconceivable to them that wisdom will not die with them.  So when one criticizes an accountability-dodging grifter and altar-desecrating priest like Fr. Frank Pavone for defying his bishop, you can be certain that the “prolife” Catholic will not say, “Hey!  That’s right!  This is hurting the credibility of the prolife movement and endangering the lives of the unborn!”  On the contrary, the whistleblower will be called (and I quote) a “twisted snake” and asked how much the Jew Soros is paying him.  The goal is no longer to defend the unborn.  It is to defend the GOP MAGA machine that the prolife movement has become.

But the reality is that abortion is not going anywhere, so we can either face that fact and try to approach the problem in a new way or keep doing the same thing over and over and failing.

Indeed, more than failing. Because in whoring itself out to the Cult of Trump, the prolife movement has not only lost the prolife fight, they have actually become more corrupt than the Democrats they hate and vilify.

Jesus warned the Church, not of persecution, but of seduction. Do not fear those who harm the body, but the one who can destroy both body and soul in hell. That one is you and me. We can destroy ourselves. And the prolife movement has completely destroyed itself with apologetics for a sex predator, with cheers for mockery of the disabled, with vile comparisons of a perv like Roy Moore to the Holy Family, with vile lies that the Holy Family were not refugees (since that would humanize their victims at the border), with vile cheering for Nazis and white supremacists, with sadism and cruelty and selfishness. They have alienated an entire generation of young people with their lies.

And for what? Trump. A lying con man and bully who promised them earthly power if they would bow down and worship him.

The prolife movement thinks only in terms of supply, not demand, with abortion. But it consistently supports sadistic GOP policies that increase demand. The #1 abortifacient in the US is poverty. And nobody loves cruelty to the poor and the brown more than the GOP or its conservative Christian apologists. Meanwhile, abortion rates have consistently dropped under Dem administrations (reaching their lowest point since Roe under the Great Satan Obama) while experiencing an uptick under Republican presidents. They will go up under Trump too.

Why? Because people don’t have abortions for fun, but because they are desperate.

So my suggestion is to try listening to the Church and crafting a state policy that actually respects all of the least of these and does not use the unborn as human shields for war on the poor and brown. Seek first the kingdom and you will get what you want as well. Or keep being played by the GOP. 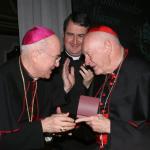 St. Mary Magdalene Was Not a...
Femina Ferox
Related posts from Catholic and Enjoying It!