Can a Catholic Be a Socialist?

Trent Horn of Catholic Answers has a new book out asking the musical question Can a Catholic Be a Socialist?

Trent Horn says no. Right on the cover and everything, which gives the ending away and spoils all the fun. 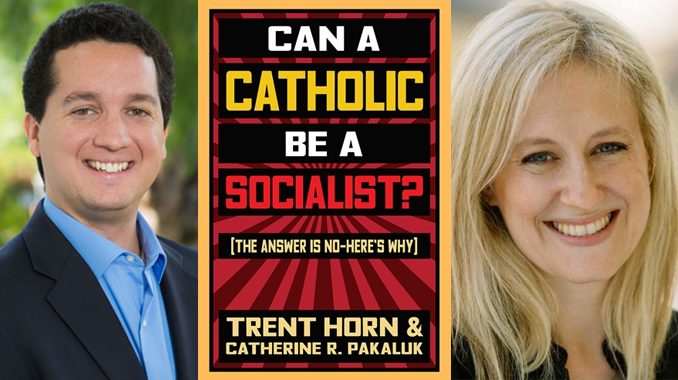 But in Europe, in the nineteenth century, the two models were joined by a third, socialism, which quickly split into two different branches, one totalitarian and the other democratic. Democratic socialism managed to fit within the two existing models as a welcome counterweight to the radical liberal positions, which it developed and corrected. It also managed to appeal to various denominations. In England it became the political party of the Catholics, who had never felt at home among either the Protestant conservatives or the liberals. In Wilhelmine Germany, too, Catholic groups felt closer to democratic socialism than to the rigidly Prussian and Protestant conservative forces. In many respects, democratic socialism was and is close to Catholic social doctrine and has in any case made a remarkable contribution to the formation of a social consciousness.

Now, as all Real Catholics[TM] know, I am not a Real Catholic[TM], of course. But I am reasonably confident the Pope Emeritus is. So I think Imma go with what he says and not with what Some Guy With a Keyboard says when it comes to the question of whether a Catholic can be a socialist.  And it sure looks to me like Benedict says that Democratic Socialists are well within the pale of compatibility with Catholic teaching.

Not that I’m a socialist. Politically, I am not particularly anything. I’m intensely leery of devotion to political parties. I think my faith should pick and choose what is useful from them rather than picking and choosing from the Faith in order to accessorize my politics.  So while I am happy to use a political party hard in order to achieve a particular goal important to the kingdom (just as a carpenter may use a hammer hard to achieve the goal of building a house), I drop the hammer the instant it is not of use.  I do not marry it.  Still less do I bow down to it.

But since I’m mortally sick of random laity going around declaring who is and is not a Catholic, nearly always based on how Republican they are, I post this for the sake of all those Catholics who dislike being excommunicated by spouting popinjays. B16 has your back, Democratic Socialists.

April 21, 2020
Masquerading as a Social Justice Warrior
Next Post

Catholic
Some Elementary Catholic Moral Reasoning
Catholic and Enjoying It!

Catholic
Simcha Fisher Gets It
Catholic and Enjoying It!

Catholic
Prayer for an Election
Catholic and Enjoying It!

Catholic
Why Don't you Talk about Theology Instead of...
Catholic and Enjoying It!
TRENDING AT PATHEOS Catholic