In my book Psychic Witch I discuss the concept of the three souls of a person in relation to how it’s taught and discussed in witchcraft traditions. Different aspects of our souls do different things before and after incarnation.

“Being primarily composed of blood and flesh, the Lower Self comes from the ancestors, and the ancestors live through us in what witches such as Raven Grimassi refer to as the River of Blood, the unbroken lineage from our first ancestor to now.”
– Mat Auryn
Psychic Witch: A Metaphysical Guide To Meditation, Magick, and Manifestation

As much as we may not want to, our biological ancestors make up who we are in the most literal of ways. A common concept in witchcraft and other magickal and spiritual traditions is the idea that we heal and redeem our ancestors, which as is part of the reason the Higher Self and Lower Self create the contract to create an incarnation and thus a Middle Self.

Just as we have a personal shadow that we may not want to dialogue with, heal, and integrate – the same is true for the ancestral shadow. The idea is that through redeeming our ancestors, we end a dormant issue that we will perpetuate through our descendants that will arise, through not addressing it.

Many traditions hold elevation rituals and ceremonies to redeem the ancestors. Other mainstream religions pray for the dead to guide and elevate them. The simplest way to redeem your ancestors is to do work contrary to their life flaws and to do it in their name. If your Great Aunt Peggy was a raging racist, you can do activism and donate to groups such as the NAACP or BLM in her name, and do the inner shadow work to see where you’ve inherited racism within yourself and work towards dismantling it there as well.

When opening up communication with the ancestors who are less than savory, you should always have well established spirit contacts of your own who are protective and involve them in your work. This may include other ancestors who were protective of you in life, but a higher authority such as deities would be recommended. ‬

First, let me be crystal clear when I say you are under no obligation to work with ANY spirit that you choose not to – ancestor or not. You, as the witch are sovereign over your spiritual space and practice.

In witchcraft there is a saying about the dead, “What is Remembered, Lives.” The idea behind this is that our memory and allying with the ancestors empowers them and allows them to keep their form and identity instead of merging into the river of The Ancestors where individuality is less clear.

However, we also have the right to choose to forget them and let them move on. Perhaps we could say “What is Forgotten, Dies” but that wouldn’t be completely true. The idea is that this issue is then processed back into the Ancestral River waiting to purge it again. To do so it will incarnate these issues with someone new in the future hopes of healing it.

Even if you yourself are not having children, its thought to affect the generations ahead of us in our family trees, even if not directly descended from us, personally.

It’s also totally acceptable to realize that redeeming ancestors may not be your work at this time or in this life. Like shadow work, it’s not always pleasant and its often difficult work. Your life lesson may be saying “no” and refusing to work with them.

The idea of being forced to forgive someone you don’t want to is not only contrary to one’s free will, but it’s also impossible. Someone is never truly ever forgiven if you don’t truly feel that forgiveness for them and can often feel traumatizing to do so. So to try to force forgiveness when you aren’t ready is pointless at the least and harmful at the most.

When we discuss sovereignty in witchcraft, we partially mean that we are responsible and have the final say in our spiritual and magickal practices. This is a path of free will. The practices and spirits that you choose to include and omit is your choice alone.

If you’re unsure whether you should or shouldn’t work with an unsavory ancestor, consult your spirit allies and guides and perform divination on the subject. 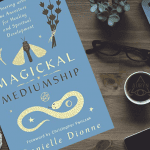 September 23, 2020 The 20 Best Books On The Dead For The Modern Witch
Recent Comments
0 | Leave a Comment
Browse Our Archives
Related posts from For Puck's Sake