Mat Auryn (New England) is a witch, writer, professional psychic, and occult teacher throughout New England. He has been drawn to the occult and metaphysical since an rawn to the occult and metaphysical since an early age, reading books on witchcraft at eight years old. He is an initiate of Black Rose Witchcraft and a priest in Sacred Fires Tradition of Witchcraft founded by Devin Hunter. He has also studied with various other traditions and teachers including Christopher Penczak in the Temple of Witchcraft Tradition, Laurie Cabot in the Cabot Tradition, Jason Miller in the Sorcery of Hekate. He is a devotee of the Covenant of Hekate founded by Sorita D’Este. He writes for Patheos Pagan in his blog For Puck’s Sake, The House of Twigs, Horns Magazine, and on his personal website. He has been featured in various magazines, radio shows, books and other periodicals such as The Witch's Almanac, DisInfo, The Wild Hunt, Down at the Crossroads podcast, Raise the Horns Podcast, Magick Magazine, Horns Magazine, Moon Books, Cutline Press, Just Julie, Magical Experiments, and more. Mat Auryn is ranked the second most influential person online in the field of neo-paganism and within the top 100 in divination according to Agilience. Mat was the very first recipient of the "Most Supportive Witch Award" presented by Witch Way Magazine for helping others in the witchcraft community and going above and beyond to make other witches feel like they are not alone. Mat has had the honor of helping thousands of people gain clarity through his skills of psychic ability and tarot reading throughout the world over the last decade. He has been interviewed on radio, in magazines, and on several websites and private newsletters. Mat teaches various metaphysical and occult subjects ranging from psychic development, magickal empowerment, working with spirits, divination, energy healing, lucid dreaming, divination, astral projection throughout New England including Salem, Massachusetts, known internationally as the Witch City. He is the author of the upcoming book Psychic Witch: A Metaphysical Guide To Meditation, Magick, and Manifestation.

How to Spot a Spiritual Impersonator Scam on...
It's also frustrating since our community has this historical stigma (which still... read more

Review: Tarot For Kids
Tarot for Kids deck, is as brilliant as it is adorable. Many... read more

Review: The Eclectic Witch's Book of Shadows
The book is a beautiful hardcover with full-color pages filled with artwork... read more

Review: New World Witchery
It's clear that Cory has a deep love for this subject and... read more

Review: Anatomy of a Witch
I find myself very grateful to be alive at the same time... read more

Review: The Witch's Path
You aren’t necessarily getting training on “how to be a witch” or... read more

Review: The Horned God of the Witches
Jason Mankey leaves no stone unturned in his quest to uncover the... read more

Review: The Four Elements of the Wise
If you seek to deepen your relationship with the elements beyond introductory... read more

The Titanic Women of Llewellyn
While I'm sure the author of the article didn't intentionally exclude women,... read more
Browse Our Archives
OTHER RELATED CONTENT
1

Building a Relationship with the Nature...
John Beckett
2 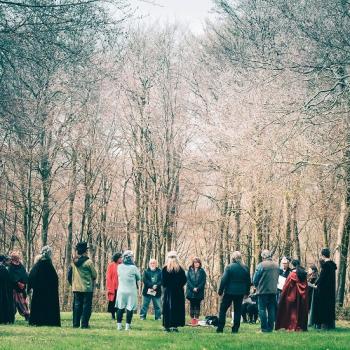 The Art of Ritual: Calling the...
Beneath the Moon
TRENDING AT PATHEOS Pagan