Before Father Duffy, there was Father Chidwick

Before Father Duffy, there was Father Chidwick February 14, 2009 Pat McNamara 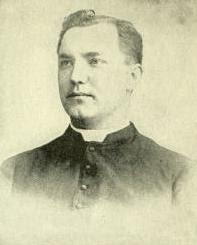 On February 14, 1898, in Spanish-controlled Havana harbor, the U.S. battleship Maine blew up, the event that triggered the Spanish-American War. Research now shows that the explosion was an accident, but a war-hungry American public was all too eager to accept the conspiracy theory hatched by the jingoist “Yellow Press.” One of the forgotten heroes of that tragic event was a Roman Catholic Chaplain assigned to the ship, Father John P. Chidwick (1863-1935). The Army & Navy Journal later said of Father Chidwick: “On that dread night in 1898 when the MAINE was destroyed, Chaplain Chidwick was everywhere present. He had a word of cheer to the injured which soothed their pain. Without thought of himself he helped the helpless and he ministered to the dying.” His name soon became a household word. Commissioned in 1895, Chidwick had been with the Maine for three years prior to the explosion. Born in Manhattan, He grew up in Williamsburg, where he attended SS. Peter & Paul parochial school. The family moved back across the river and he was ordained for the New York Archdiocese. He resigned from the Navy in 1908, served as Rector of St. Joseph’s Seminary in Dunwoodie, and was named a Monsignor. During a period when anti-Catholic groups questioned the loyalty of American Catholics, Father Chidwick was held up as living proof of just how wrong they were.

February 14, 2009 Happy Birthday, Mrs. Brady!
Recent Comments
0 | Leave a Comment
"Wow! I didn't know about that Statement from the US Bishops. The fact that they ..."
Florence Ziegler “It’s About Time They Got Here”:  Catholics ..."
"Very interesting. Why did the Jesuits change the name of the school from a saint's ..."
Kristin Nealon Wilson Ocds Who’s Buried in Catholic Cemeteries?
"It is a joy to that you are back blogging. Thanks for the reference to ..."
Joe A Church Historian’s First Communion
"Thank you for all your enjoyable, informative posts on Church history. I agree that the ..."
Kathleen Brady Looking at the Scandals– A Church ..."
Browse Our Archives
get the latest from
Catholic
Sign up for our newsletter
POPULAR AT PATHEOS Catholic
1

If Any Drug Tested on HEK-293...
Through Catholic Lenses
Related posts from McNamara's Blog