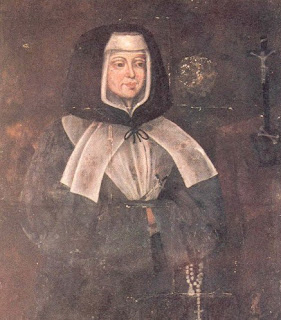 Born in France, she was the youngest in a family of twelve. Although but six years of age when her father died, she helped her mother run the store in order to maintain the family. As a young woman she took over the family business. At 27, shortly after the death of her mother, an elderly woman invited Jeanne to consecrate herself to the many poor people of her neighbourhood. The poor increasingly took up more of her time than her clients. Finally they became her full-time occupation. Within a short time no longer did the poor await her visits to them, but they came to her. In 1700, she warmly welcomed a child into her home, and soon after she took in the sick, the aged, and the destitute.Within four years, in 1704, some young girls were interested in helping Jeanne and were even willing to wear a religious habit if she wished them to do so. It was thus that the congregation of Sainte-Anne de la Providence was born. Under this name the constitutions were approved in 1709. Very quickly her charity spread beyond the limits of Saumur. By the time of her death, Jeanne Delanoue left a dozen communities, as well as homes for the poor and schools. On November 5, 1947 Pope Pius XII beatified Jeanne Delanoue. She was canonized in 1982.
(Adapted from the Vatican website)

August 17, 2009 St. Hyacinth (1185-1257)
Recent Comments
0 | Leave a Comment
"Wow! I didn't know about that Statement from the US Bishops. The fact that they ..."
Florence Ziegler “It’s About Time They Got Here”:  Catholics ..."
"Very interesting. Why did the Jesuits change the name of the school from a saint's ..."
Kristin Nealon Wilson Ocds Who’s Buried in Catholic Cemeteries?
"It is a joy to that you are back blogging. Thanks for the reference to ..."
Joe A Church Historian’s First Communion
"Thank you for all your enjoyable, informative posts on Church history. I agree that the ..."
Kathleen Brady Looking at the Scandals– A Church ..."
Browse Our Archives
get the latest from
Catholic
Sign up for our newsletter
POPULAR AT PATHEOS Catholic
1

Sacking the Saints - Pentecostal Persecution of Religious...
Co-authored by Dr. Ana Keila Mosca Pinezi* and Dr. Andrew Chesnut One...
view all Catholic blogs
What Are Your Thoughts?leave a comment
Copyright 2008-2021, Patheos. All rights reserved.
error: Content is protected !!