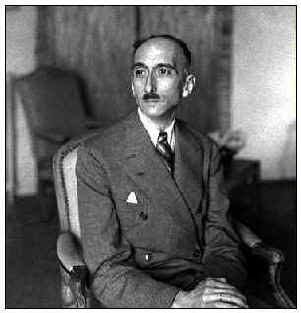 French novelist, essayist, poet, playwright, journalist, winner of the Nobel Prize for Literature in 1952. François Mauriac belonged to the long tradition of French Roman Catholic writers, who examined the problems of good and evil in human nature and in the world. “There is no accident in our choice of reading. All our sources are related.” (from Mauriac’s Mémoires Intérieures, 1959) François Mauriac was born in Bordeaux, the youngest son of Jean-Paul Mauriac, a wealthy businessman. When Mauriac was not quite two years old, his father died, and the family lived with grandparents. His mother was a devout Catholic, who was influenced by Jansenist thought. From the age of seven, Mauriac attended a school run by the Marianite Order. The author never ceased to acknowledge the importance of his early education although he was unhappy at Ste Marie. After studies at the University of Bordeaux, Mauriac received his licence (the equivalent of an M.A.) in 1905. Next year he went to Paris to prepare for entrance in the École des Chartes, where he was accepted in 1908. However, Mauriac remained at the school only a few months and then decided to devote himself entirely to literature. His first volume of poems, LES MAINS JOINTES, appeared in 1909. Mauriac’s work show influence from several writers. He published studies on Racine and Marcel Proust, but Pascal was perhaps the most important thinker for him. Mauriac’s style was poetic, full of suggestion. He said, “I believe that only poetry counts and that only through the poetical elements enclosed in a work of art of any genre whatever does that work deserve to last. A great novelist is first of all a great poet.” Mauriac’s early works depicted the struggle of passion and conscience, but after a spiritual crisis he solved this conflict in favor of the spirit: “Christianity makes no provision for the flesh. It suppresses it.” In 1913 Mauriac married Jeanne Lafon; their first child, Claude, became also a novelist. During WW I Mauriac served in the Balkans as a Red Cross hospital orderly. After the war he wrote two novels, but it was LE BAISER AU LÉPREUX (1922, The Kiss to the Leper), in which he found his own voice. The tragic story was about a wealthy but hideously ugly young man who is destroyed by an arranged marriage with a beautiful peasant girl. Mauriac’s following novels about tormented souls were viewed with increasing distate by Catholic right wing and eventually the Catholic press in general labelled the author as a renegane, who was obsessed with degraded characters. LE DÉSER DE L’AMOUR (1925) continued Mauriac’s theme of the futility of love. In the novel a sexually frigid young widow provokes the passions of both her physician and his son. THÉRÈSE DESQUEYROUX (1927), based on an actual murder trial of Madame Henriette-Blance Canaby, is acclaimed as one of the best French novels. She was accused of having attempted to poison her husband, but he refused to testify against his wife. In the story a young wife, Thérèse, is driven to murder her husband, a coarse landowner. This work contained some of the central themes running through Mauriac’s fiction: the oppression of French provincial life, the sexual pressures, the mystery of sin and redemption, and the savage beauty of the countryside to the south of Bordeaux. The character of Thérèse fascinated Mauriac and he went on to write two short stories and one more novel about her. LE NŒAUD DE VIPÈRES (1932, Viper’s Tangle) was a family drama, and one of Mauriac’s greatest novels. The protagonist is an old man Louis, whose determination to keep his money from his wife and children start a counterpoint against him. In 1933 Mauriac was elected to the Académie Française. He began contribute to the French newspaper Le Figaro, where he often attacked the rising Fascism. In the late 1930s Mauriac started to write plays. However, they never achieved the success of his novels, although ASMODÉE was performed 100 times in 1937-1938 at the Comédie Française. During German occupation of France in World War II, Mauriac wrote under the pseudonym Forez a protest against German tyranny and was forced to hide with his family for some time. This work, LE CAHIER NOIR (1943) was published by Les Editions de Minuit and was then smuggled to London, where it was used used as a propaganda tool. LA PHARISEINNE, which appeared in 1941, was read as an allegory of France’s surrender to Nazi Germany. In the 1950s Mauriac became a supporter of de Gaulle and his anticolonial policies in Morocco. He wrote for Algerian independence, condemned the use of torture by the French army in Algeria, and allied with Catholics on the left. From the mid-1950s Mauriac wrote a weekly newspaper column, Bloc-Notes, which gained a large audience. He also published a series of personal memoirs and a biography of de Gaulle. Mauriac died on September 1, 1970, in Paris.

September 1, 2009 Siegfried Sassoon (1886-1967)
Recent Comments
0 | Leave a Comment
"Wow! I didn't know about that Statement from the US Bishops. The fact that they ..."
Florence Ziegler “It’s About Time They Got Here”:  Catholics ..."
"Very interesting. Why did the Jesuits change the name of the school from a saint's ..."
Kristin Nealon Wilson Ocds Who’s Buried in Catholic Cemeteries?
"It is a joy to that you are back blogging. Thanks for the reference to ..."
Joe A Church Historian’s First Communion
"Thank you for all your enjoyable, informative posts on Church history. I agree that the ..."
Kathleen Brady Looking at the Scandals– A Church ..."
Browse Our Archives
Related posts from McNamara's Blog