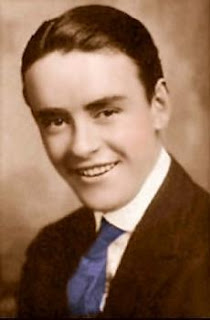 Robert “Bobby” Harron (April 12, 1893 – September 5, 1920) was an American motion picture actor of the early silent film era. Although he acted in scores of films, he is possibly best remembered for his roles in the D.W. Griffith directed films Intolerance and The Birth of a Nation. He was also the older brother of film actor John Harron and actress Mary Harron. Born Robert Emmett Harron in New York City, New York, U.S., he was second oldest child of nine siblings in a poor, working-class Irish-Catholic family. He attended the Christian Brothers school in Greenwich Village and beginning at the age of thirteen found work as a messenger boy for American Biograph Studios to help support his family. Within a year of working for Biograph, Robert Harron and Christian Brothers friend and classmate James Smith were noticed by newly hired director D.W. Griffith who put both young boys under contract and the pair began appearing in bit parts for the studio. His first film was the now lost 1907 Biograph short Bobby’s Kodak. Harron quickly became a favorite of Griffith and Griffith began to give the 14-year-old increasingly larger film roles. The teenaged Robert Harron was often cast by Griffith in the role of the “sensitive” and “naïve” boy, who was overwhelmingly sympathetic and appealing to American film-goers in the very early years of American motion pictures and not far removed from Harron’s real-life persona; Harron was often described as a quiet and soft-spoken youth. It was these traits that helped garner much public interest in the young actor, especially amongst young female fans. In 1912 alone, Robert Harron appeared in nearly forty films at Biograph.
Harron is probably best recalled for his roles in the three epic Griffith films: 1914’s Judith of Bethulia, opposite Blanche Sweet, Mae Marsh, Henry B. Walthall and Dorothy and Lillian Gish, 1915’s controversial all-star cast The Birth of a Nation, and 1916’s colossal multi-scenario Intolerance opposite such popular stars of the era Lillian Gish, Mae Marsh, Miriam Cooper, Wallace Reid, Harold Lockwood, Carol Dempster and Mildred Harris. One of Harron’s most popular roles of the era came in 1919 when he starred opposite Lillian Gish in the Griffith directed romantic film True Heart Susie. Robert Harron’s film career continued to flourish throughout the 1910s and he was occasionally paired with leading actresses Mae Marsh and Lillian Gish with romantic plots, often in roles that cemented his “sensitive boy” image. Harron had, in fact, a burgeoning off-screen romantic relationship with Dorothy Gish. By 1920 however, it was reported that film director D. W. Griffith’s interest in the young actor had waned and when Griffith hired film actor Richard Barthelmess to star in his 1920 film Way Down East, Harron was inconsolable. On September 5, 1920, while in New York City to attend the film premiere of Way Down East, Harron fatally shot himself in the left lung in his hotel room with a revolver that he had placed in a jacket. Supposedly the weapon was purchased during the afternoon from a street begger as Harron did not believe in just handing out money unless something was bought. That was done because he wanted people to feel as if they actually earned the funds given. The prevailing theory about the shooting is that as Harron changed jackets for the evening’s event, the gun fell out of the pocket and discharged when it struck the floor. Although the death was officially ruled accidental, many historians believe that Harron committed suicide. However, many of those closest to the actor vehemently refuted that Harron, a devout Catholic, would ever have considered suicide. While on his deathbed, Harron reportedly confided to his boyhood priest that his gunshot wound was the result of an accident.
Nevertheless, in preparation for a 1993 film festival scheduled in honor Harron’s birth centennial at MOMA, Joseph P. Fanning (the organizer and main lecturer) researched and obtained copies of the death certificate/medical records. These documents showed, that despite the publicized news reports, the angle of the wound and the width of the powder burns associated could not be the result of a mere accident. Thus, even with the lack of any witnesses, the evidence clearly indicated that Harron’s death was a result of suicide. The main hypothesis for the action was determined to be the result of disappointment because Griffith, a substitute father, had passed Mr. Harron over for the male starring role in Way Down East. Robert Harron was 27 years old at the time of his death and had never married. His film career spanned nearly fifteen years and Harron had appeared in over two hundred films. Harron was interred at Calvary Cemetery in Woodside, Queens, New York City.
Previous Post

September 5, 2009
Two Encyclicals on the Rosary Issued Today
Next Post

September 5, 2009 Francis Ford (1881-1953)
Recent Comments
0 | Leave a Comment
"Wow! I didn't know about that Statement from the US Bishops. The fact that they ..."
Florence Ziegler “It’s About Time They Got Here”:  Catholics ..."
"Very interesting. Why did the Jesuits change the name of the school from a saint's ..."
Kristin Nealon Wilson Ocds Who’s Buried in Catholic Cemeteries?
"It is a joy to that you are back blogging. Thanks for the reference to ..."
Joe A Church Historian’s First Communion
"Thank you for all your enjoyable, informative posts on Church history. I agree that the ..."
Kathleen Brady Looking at the Scandals– A Church ..."
Browse Our Archives
Related posts from McNamara's Blog