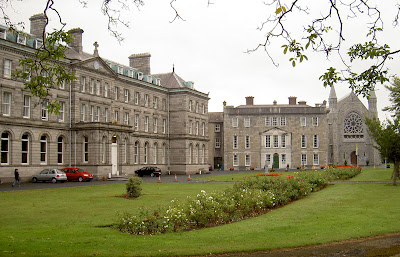 During the nineteenth century, Ireland experienced what historian Emmett Larkin calls a “devotional revolution.” Beginning in the 1840’s (and continuing for over a hundred years), Ireland witnessed a flourishing of Catholic life as vocations rose dramatically, and schools and churches were built in increasing numbers. Religiously speaking, the Irish oversaw a “spiritual empire” that extended throughout the English-speaking world. In 1876, one Irish priest wrote that “the whole country may be regarded as a vast recruiting field for sustaining the distant missions.”

One of the major sources for missionaries was the seminary founded in 1842 by Father John Hand (1807-1846), the College of All Hallows. Reading accounts of Irish priests in the missions aroused Hand’s interest, and he determined to establish a seminary to train Irish priests who would serve overseas. With help from the Irish hierarchy, he started the school in November 1842 and soon had a sizeable student body. An early catalogue for the school stated that its purpose was “the Education of Ecclesiastics for the Foreign Missions.”

More than four thousand priests have been ordained from All Hallows for service in the United States, Canada, South America, South Africa, the West Indies, India, Australia, New Zealand, and the United Kingdom. The English Catholic poet Aubrey De Vere wrote of the school:

Hope of my country! House of God!
All Hallows! Blessed feet are those
By which their shadowy courts are trod,
Ere yet the breeze of morning blows!
Blessed are the winds that waft them forth
To victory over the rough sea-foam—
Can God forget the race at home?

November 1, 2010 Religious Profession at Long Island Convent, 1900
Recent Comments
0 | Leave a Comment
"Wow! I didn't know about that Statement from the US Bishops. The fact that they ..."
Florence Ziegler “It’s About Time They Got Here”:  Catholics ..."
"Very interesting. Why did the Jesuits change the name of the school from a saint's ..."
Kristin Nealon Wilson Ocds Who’s Buried in Catholic Cemeteries?
"It is a joy to that you are back blogging. Thanks for the reference to ..."
Joe A Church Historian’s First Communion
"Thank you for all your enjoyable, informative posts on Church history. I agree that the ..."
Kathleen Brady Looking at the Scandals– A Church ..."
Browse Our Archives
get the latest from
Catholic
Sign up for our newsletter
POPULAR AT PATHEOS Catholic
1

Accessibility: the Historical Fiction of Sola Scriptura
How historically accessible is the Bible? In A Defense of Sola Scriptura,...
view all Catholic blogs
What Are Your Thoughts?leave a comment
Copyright 2008-2021, Patheos. All rights reserved.