The Setons, the Bayleys, and the Roosevelts

Archbishop Robert Seton was remembered as a fairly eccentric character who made a good deal of his family background. A pastor, scholar, and enthusiast for ecclesiastical minutiae, he was also a genealogist who traced his roots back to Medieval Europe. In 1899, he published a 438-page history, An Old Family: The Setons of Scotland and America. Enthusiasts of American Catholic history will find the second half most interesting, which discusses his grandmother, St. Elizabeth Seton (1774-1821), and her descendants. 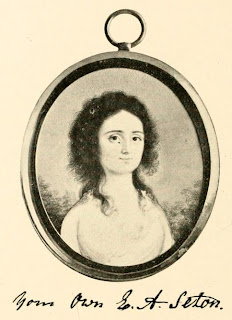 Elizabeth Ann Bayley at the time of her marriage, 1794

Her conversion to Catholicism in 1805 dismayed her relatives; she was written out of her godmother’s substantial will. Moving to Baltimore, she founded the Sisters of Charity in 1809. For twelve years she was the superior in Emmitsburg, Maryland. Her final words were, “Be children of the Church, be children of the Church.”

All three daughters followed her advice. Anna and Rebecca joined her at Emmitsburg, but both died in their teens. Catherine became a socialite, traveled, and received many marriage proposals, rejecting them all. At 46, she joined the Sisters of Mercy. She was particularly active in prison ministry. Her obituary stated:

No one probably ever acquired such influence and control over the thieves and robber class of New York… They came for years to seek her advice and guidance; they endeavored to make her trustee and executor for their wives and children, so implicit and unbounded was their confidence in her. She would be called to the parlor to meet at the same time some relative moving in the best circles, and perhaps some unfortunate whose steps to the convent had been followed by a detective.

In her eighties, she studied foreign languages in order to “instruct or console the prisoners of all nations whom she encountered in this awful abode, which she did to the great comfort of many a poor foreigner.” 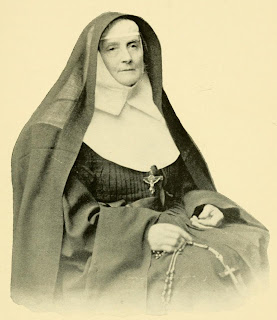 Richard was remembered as being “of a somewhat restless disposition, ever wanting to roam the world.” In 1823, he died off the coast of Africa while serving with the Navy. William studied at Mount St. Mary’s College, not far from his mother’s convent. He too joined the Navy, serving for fifteen years. 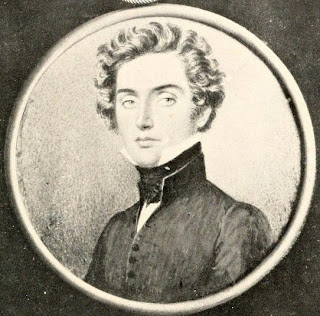 In 1832, he married Emily Prime, also from a distinguished New York family. Their wedding was performed by Father Felix Varela, whose canonization cause is underway. New York’s Archbishop John Hughes considered William “the justest man I have ever known.” The Setons had nine children; seven lived to adulthood.

Two sons served in the Civil War. After studying in Europe, Henry (1837-1904) joined the Austrian Army. In 1861, he came home to fight for the Union. A career soldier, he served in the Indian Wars and the Spanish-American War. (His father-in-law, Major General John G. Foster, was a Catholic convert.) 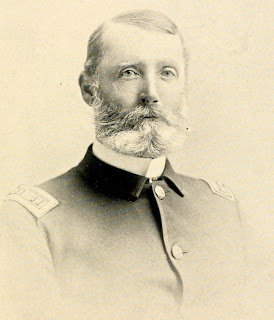 William Seton (1835-1905) also studied abroad before the war. A captain in a New York regiment, he was wounded twice. After the war, he wrote novels and poetry, studied psychology in Europe, and authored scientific works for popular audiences. 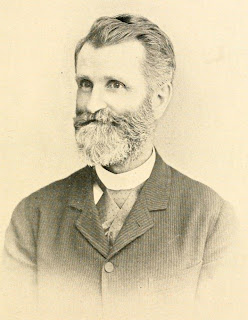 During the war, their brother Robert (1839-1927) was a seminarian in Rome. Arguing that his family background qualified him as a nobility of sorts, he gained admission to the Pontifical Academy of Noble Ecclesiastics, a diplomatic training school for priests of aristocratic birth. He frequently noted that he was the only American member. In the family history, he also points out that he was the first American priest to be named a Monsignor (in 1867). 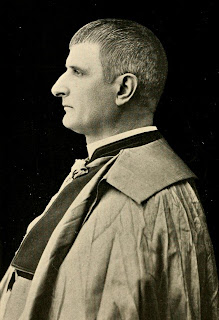 Back home he continued to cultivate Roman connections. After many years in a Jersey City parish, he returned to Rome, taking his place among the nobility. In 1903, he was named an honorary archbishop. He had his peculiarities; he got upset if the missal ribbons weren’t ironed before he said Mass. He also made unusual statements like, “All great men have small feet. I have small feet.” Financial considerations (and aristocratic tastes) forced a return to America, where the Sisters of Charity looked after him during his final years.

When Robert was ordained for the Newark Diocese in 1865, the bishop was his cousin James Roosevelt Bayley (1814-1877), whose father was Elizabeth’s half-brother. He was named for his maternal grandfather, James Roosevelt, a wealthy New York merchant. Ordained for the Episcopal Church in 1839, he converted in 1842 and became a Catholic priest. He was removed from his grandfather’s will. 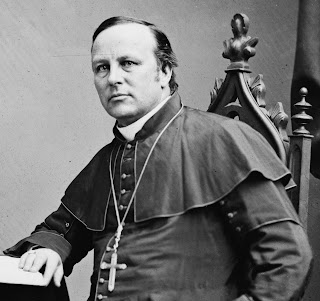 He became first Bishop of Newark in 1853, a diocese covering all New Jersey. Three years later he founded a college in Madison, New Jersey, which he named for his aunt. Seton Hall College (now university) moved to its South Orange campus in 1880. In 1872, he was appointed Archbishop of Baltimore. He was buried next to Mother Seton in Emmitsburg. 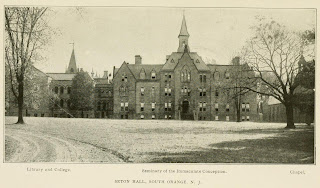 The nephew of a saint, Bayley was also a distant cousin of two presidents, a Dutch Reformed Republican and an Episcopalian Democrat. Although neither Theodore nor Franklin had Catholic connections within their immediate families, they numbered many among their friends, colleagues and supporters. In 1905, Theodore was the first president to speak at a Catholic college, Holy Cross in Worcester, Massachusetts. Both men cherished the memory of their distinguished Catholic relatives, and enjoyed reminding Catholic voters of it. 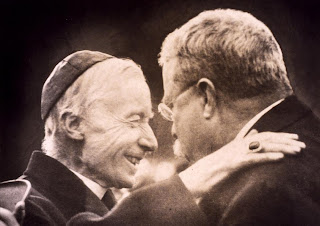 Soldiers, sailors, scientists, prison chaplains, teachers, social workers, authors, nuns, priests, and bishops: St. Elizabeth Bayley Seton and her family shaped Catholic life in nineteenth century America. And they continue to shape it today. Their descendants can take pride in the continuing legacy of education, scholarship, health care and pastoral ministry, all driven by the same spirit of charity that motivated Elizabeth, her Sisters, and her children two hundred years ago.

January 9, 2011 Catholic Poetry
Recent Comments
0 | Leave a Comment
"Wow! I didn't know about that Statement from the US Bishops. The fact that they ..."
Florence Ziegler “It’s About Time They Got Here”:  Catholics ..."
"Very interesting. Why did the Jesuits change the name of the school from a saint's ..."
Kristin Nealon Wilson Ocds Who’s Buried in Catholic Cemeteries?
"It is a joy to that you are back blogging. Thanks for the reference to ..."
Joe A Church Historian’s First Communion
"Thank you for all your enjoyable, informative posts on Church history. I agree that the ..."
Kathleen Brady Looking at the Scandals– A Church ..."
Browse Our Archives
Related posts from McNamara's Blog