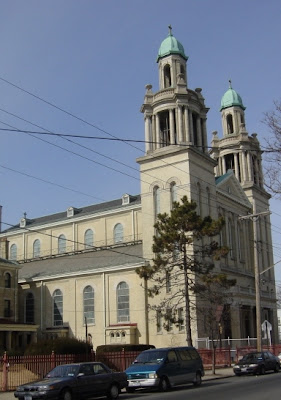 BLESSED SACRAMENT, Brooklyn, N.Y. —
To relieve the overcrowding of St. Malachy’s due to the influx of people into the Cypress Hills section following the annexation in 1886 of the 26th Ward to the City of Brooklyn, Bishop Loughlin founded the parish of the Blessed Sacrament on February 14, 1891. Beginning with February 15 two Masses were said each Sunday at Lafayette Hall. The first Sunday the congregation numbered about 15 at each Mass. The second the attendance was doubled. Rev. M. F. Murray, who had attended Cypress Hills on these occasions, was recalled, but after a lapse of a month, in response to an appeal from the parishioners, Bishop Loughlin gave permission to have Mass celebrated the following Sunday, leaving the committee to secure the proper place.

Since Lafayette Hall would not be rented for church purposes, a hall on Atlantic Avenue belonging to Mr. George Pfohlmann was obtained. Mr. Timothy Riordan constructed an altar and Mrs. Pfohlmann dressed it, and Rev. Joseph E. McCoy, who was appointed pastor, said Mass the following Sunday. The old Dykeman farmhouse which stood on the plot purchased some months previously was then fitted up as a rectory, and Mass was said on the ground floor.

After Father McCoy’s first Mass in the parish a meeting was held to arrange for the collection of funds for the church, and the following contributions were made: Michael Finnegan, $100; Thomas Tierney, $50; Patrick Dobbins, $50; Patrick Corrigan, $50; Edward Carmody, $50; and Edward Reid, $30. The men collected about $1000 and the women over $600, this forming the nucleus for a building fund. The cornerstone was laid on July 19, 1891; the building was finished in September and was dedicated on November 22, 1891. It is frame, 40 by 90 feet, and was the last church founded and dedicated by Bishop Loughlin. 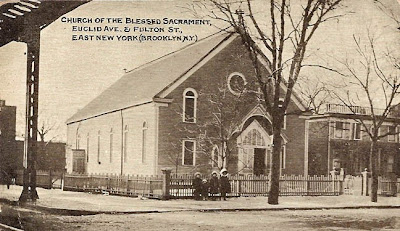 Father McCoy was born on March 15, 1860, and educated at St. Francis Xavier’s College, New York, graduating in 1881. In November, 1893, he was given Rev. Charles H. O’Dougherty as an assistant. To make provision for the rapidly increasing congregation, ground opposite the church was obtained in 1898. Father McCoy was obliged to retire on account of failing health, and Rev. Thomas A. Nummey was appointed acting pastor on July 9, 1908. After Father McCoy’s death (May 10, 1910), Rev. John M. Kiely was appointed pastor (January 1, 1911).

Father Kiely at once bent all his efforts towards the erection of a more commodious church. Since he wished his parishioners to have a suitable hall for social gatherings, it was decided to build a large hall and to use the same for Mass on Sundays and Holy Days. Ground was broken on November 5, 1911, by Monsignor P. J. McNamara, and on July 7, 1912, the building was dedicated by Monsignor Joseph McNamee. It is a magnificent structure, 60 feet wide, and extending 124 feet towards Euclid Avenue. The front and sides are faced with white brick, and two ionic columns of Indiana limestone mark the main entrance. It contains an auditorium with a stage 28 by 22 feet, and the basement has bowling alleys, meeting-rooms, library, etc. 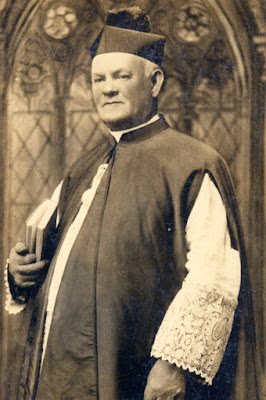 Monsignor John Kiely was Pastor from 1910 until his death in 1941. It was said of him that he enjoyed riding through nearby Forest Park because it reminded him of the green fields of Ireland.

Father Kiely was born in 1865 in County Tipperary, Ireland, studied at St. Patrick’s College, Thurles, and was ordained in the Cathedral there on June 18, 1893, by the late Archbishop Croke. His first appointment was as assistant at the old Assumption Church, Brooklyn, and after four years he was appointed pastor of the newly-formed parish at Brentwood-in-the-Pines and its mission at Central Islip. While there he also acted as chaplain to the State Hospital at Central Islip and to the Academy of St. Joseph-in-t he-Pines. After laboring thirteen years in this sparsely settled territory, he was appointed on January 1, 1911, to the Church of the Blessed Sacrament. His assistants, Revs Peter Jessup and Charles Sennett, were appointed early in 1914.

The congregation numbers over 5000 parishioners, mostly Irish, with a good minority of Germans. According to the financial report for 1914, the new building is free from debt, and the parochial property is valued at about $I 15,000. Father Kiely has completed (March, 1914) plans for a thoroughly up-to-date parochial school, which is to be in the Classic style of architecture, to accommodate 1200 children’and cost about $120,000.

The Catholic Church in the United States (1914)


NOTE
Although the Sisters of St. Joseph taught at the parish for many years, the Christian Brothers did not arrive as was predicted in the above narrative.

April 22, 2011 Seven Churches Visited on Holy Thursday: Lowell, Massachusetts (1894)
Recent Comments
0 | Leave a Comment
"Thank you for all your enjoyable, informative posts on Church history. I agree that the ..."
Kathleen Brady Looking at the Scandals– A Church ..."
"Such laws might have done Ireland some good, in the case of the Magdelenes. The ..."
HematitePersuasion “A Million Foreigners, Most of Them ..."
"sounds like a total waste of time"
kyuss Holy Name Rally at Ebbets Field ..."
"This is a marvelous joining of three important Brooklynites who happened to have gone to ..."
Joe Three Giants of Brooklyn Catholicism
Browse Our Archives
Follow Us!